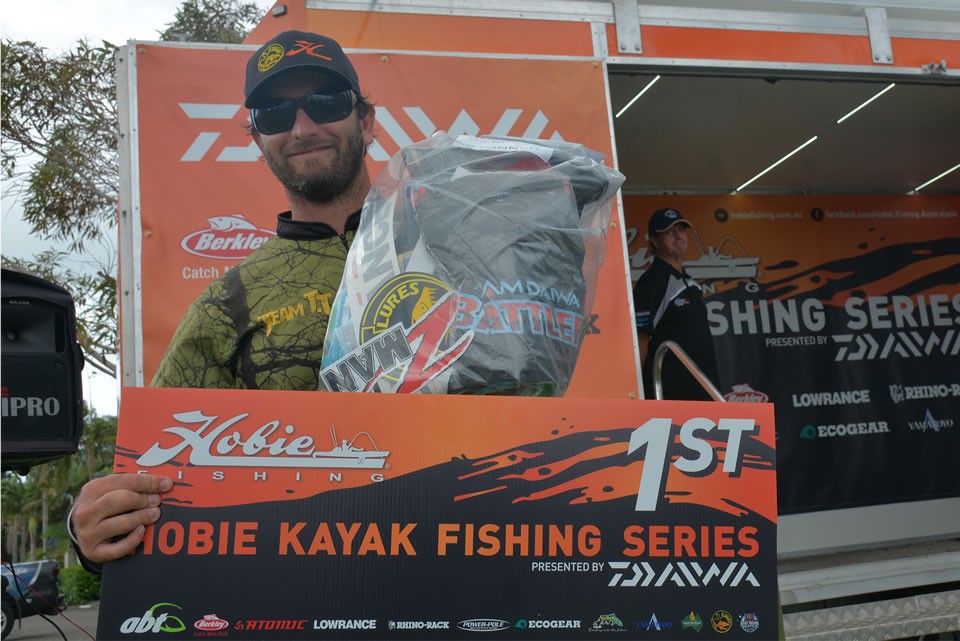 Moving up from 5th on day 1, he took a total of 6 bream weighing 3.37kgs claiming victory and guaranteeing him a place in the Grand Final. He was followed closely by Stewart Dunn with 6 bream for 3.05kgs and Josh Carpenter with the heaviest bag of the day weighing 1.81kgs and bringing his total to 6 fish for 2.91kgs.

The final day of competition began in stark contrast to day 1 with moderate winds firing up early for competitors crossing the start line at 7:00am. Many welcomed the changed conditions with the 15 – 20 knot winds and cloud cover stirring up the bite in the weed beds on the back lake, as well in the Keys and Pipers Bay.

Day 1’s aggressive smaller bream were still present with reports of guys fishing flats catching upwards of 40 undersize bream in the session. The bigger fish were out there, you just had work through the little guys.

On returning to the weigh in the fisho’s were greeted with a post fishing feast of Tiger Prawns, salads and sausage sizzle put on by the event organisers and cheffed up by James from Barclay’s marine.

Prior to weigh in, tournament director Steve Fields checked in with day 1 leader Michael Mass who reported only picking up a couple of small ones, a trend present across the field as many anglers presented small bags to the weigh master for the final weigh in. Fortunately for Michael, his 2 smaller bream coupled with his generous lead from day one still secured him a spot in the top 5.

The Hog’s Breath Cafe Boss Hog Big Bream was taken out by Clark Wilson with the largest Bream of the round weighing in at 1.01kgs.

On day 1, event runner up Stewart Dunn had a long pedal out to the paddocks at the front of the system taking a risk reducing his actual fishing time by over 4 hours to get there and back.

“ I really needed to be on my way back at 11 or 11.30 to safely make it and time my run for the next day. At 11 o’clock I had zero bream in my Hobie live well. I hadn’t seen many fish but the ones I saw were good sized. I was hitting one last area on my way out of the paddock casting OSP Do-live craws tight into the vertical posts around the leases when one came tight at 11:02, at 11:04 it happened again and at 11:08 I had bagged out. ”

Fortunately, it was a risk that paid off and after much deliberation he did the long haul back to the paddocks but changed things up switching to a squidgy lobby to punch cast in to the wind easier on day 2.

“The day started well and within 3 casts I had a squeaker in the well. When I got to the second set of leases I caught a few good fish straight away.I was expecting a great session but to my surprise that was about it for me. The rest of the session saw pulled hooks or uninterested bream just swimming the other way.”

“It was a really close round and I think I was super lucky to climb up to 2nd place on day 2. A massive thanks goes out to Andrew Death for his info from his pre-fish a month earlier, without his advice I would have fished the flats with surface and cranks and caught smaller fish. Also a big thanks to Lox rods. Lastly massive thanks to Hobie/Daiwa and ABT for a very well run event.”

Kris too had a long pedal, heading 7.5kms out to the racks up in the dirtier water behind Wallis Island.

“I figured if I fished a few weed beds and points on the way there and back, 2 hours each way with the forecast conditions should be a safe bet.”

After a quiet start things picked up in the racks and he had 3 in the bag by 10:30. A quick paddle to another set of racks on limited time scored him a 31cm upgrade.

“At the start of the paddle back I had a 25.5, 26.5 and 31cm fork in the well which I thought was far from good enough so paddled pretty hard to make sure I had time to fish a couple of poles and a flat on the way back, the pole produced a 27 and 27.5 and the flat a 28.5 consolidating to a much more respectable bag.”

The conditions on day 2 were going to make the run to the racks more difficult with shifting winds making for a head wind travelling in each direction. After a hard slog getting there and slow start Kris decided to switch to hard bodies for better results.

“ It was on!. The first few fish were undersize but after that a 27 and 29cm fish were in the well to make up the bag with one upgrade. Then another 31cm in the bank to move on a little guy and the southerly hit with force leaving me to head for home and the fish chewing. ”

A last ditch effort on the the same flat as the afternoon before paid off producing a 28.5cm upgrade and a similar bag to day 1.

“Back at the weigh in it was mixed results all round as the top few stumbled and some of the mid fielders weighed some reasonable bags. I was hopeful that i had enough to keep me in the top 5 but it never even crossed my mind until Browny told me that the weigh in was over and I was on top of the list, pretty stoked to say the least.”

“Big thanks to all the competitors and officials and my personal sponsors Hobie, TT Lures, Daiwa, Blueye Sunglasses and Manning River Marine and also thanks to James from Barclays Marine for taking time out to run the BBQ.”

Rolling 2.5″ Bloodworm Zman GrubZ across the top of the racks with most fish eating the lure on the roll and rolling Hardbodies down the edge of the racks.