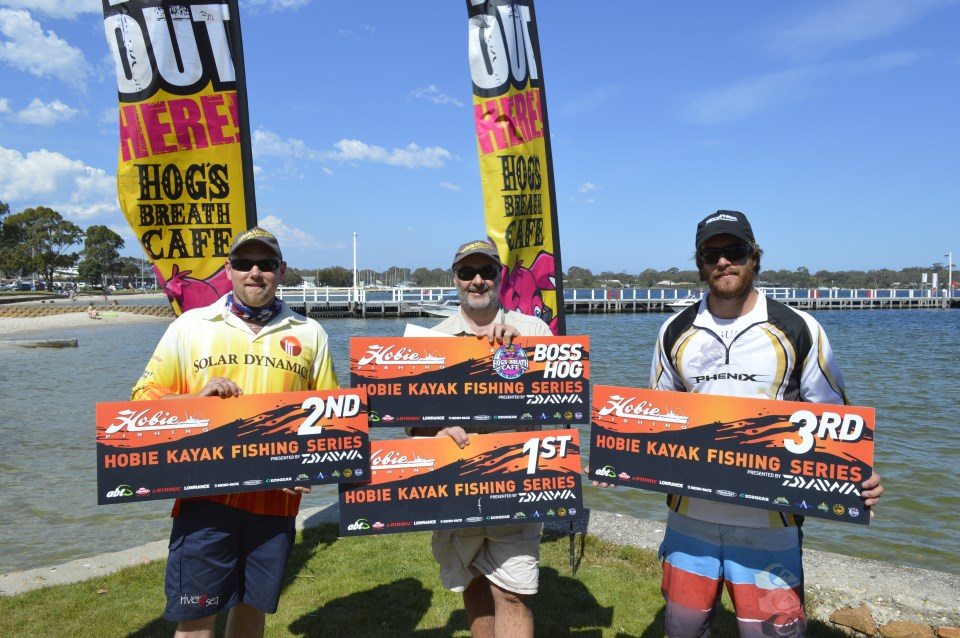 Over the October 11-12 weekend, Paynesville with its direct access to Lake King and Lake Victoria is located 17km from Bairnsdale in the Gippsland region of Victoria was the venue for round 14 of the Hobie® Kayak Bream Series presented by Daiwa.

As well as being home to over 60 bird species and many species of ground orchids and wildflowers, the hinterland around the charming village is one of the best places in Victoria to go koala spotting. The township is surrounded by lakes on three sides, with canals and inlets providing plentiful sheltered moorings for boats and excellent kayak launching sites.

Lovers of fishing, flock to the lakes and waterways to target the regions famous black bream. Hobie has a long association with competitive fishing in the Gippsland, and Paynesville was the third arena selected from this incredible lake system and the penultimate tournament to be held before the 2014 series grand final in WA next month.

On the morning of day one competing anglers in the final qualifier, pedaled off from the Power-Pole starting line in clear conditions which became overcast throughout the day. Anglers were predominately chasing Black bream with a bag limit of three fish to be brought back to the Berkley Bump Tub. As the day one session came to a close on the choppy waters, the large field of 44 anglers began to accumulate and throw their final casts around the Atomic Launch site in the closing minutes before key tags were due back on the board.

Fishing throughout the day was generally mediocre with only a few anglers getting their full bag of three legal Bream. The fish were not on the bite early and were timid, in the variable conditions later in the day. Upgrades were scarce in all locations across the tournament arena.

At the completion of the weigh-in, Chris Bribidge from Fern Tree Gully was leading the field with a 3.53 kg bag, dominating the 2.25 kg bag of Nathan Prezioso from Victoria and Ty Hanley from Victoria whose 1.74 kg bag placed him in third with a day to go in the event.

In conditions that were considerably different to day one, overcast skies, and predicted temperatures ranging from 12 to 28 °C and a 6 to 10 kph breeze, anglers eagerly pedaled off the Power-Pole start line hoping to improve on Saturday’s catch.

After two long days on the water and with all anglers safely back at the tournament location, bags were removed from the Berkley Bump Tub and placed on the scales for the day two weigh-in. After waiting for the final confirmation from the tournament director it was announced that Chris Burbidge from Fern Tree Gully had snared the major prize for the event. Burbidge won a hefty cheque and an excellent sponsor prize pack for his two day aggregate bag weight of 5.15 kg. Burbidge has already qualified for the Hobie Kayak Bream Series Grand Final which will be presented by Daiwa in Western Australia so the two qualifying spots will be quickly scooped up by second and third placed anglers. Second place went to Ben Phayer from Mornington in Victoria with Justin Dingwall from Sale in Victoria taking the third place cheque and sponsor prize pack.

Tournament winner Burbidge’s plan of attack for day two, after his day one standing of first position was to get a bag of fish in Duck Arm even though they were small, and then focus on upgrading.

“I used a blade in the early morning on drop off’s, later in the morning I threw on a Lay Down minnow and started catching fish on the edges ”.

Outlining the technique he used to tempt some sizeable Black Bream to hit his lure and win the tournament Burbidge recounted his approach.

Burbidge expressed his thoughts on what gave him the winning edge in the tournament.

“I pre-fished Paynesville a few times, about 3 and 5 weeks ago. The pre-fish three weeks ago showed me where not to go”.

Lure: Ecogear VX in 426 and the Nories Laydown minnow.

Phayer who has become a regular competitor in the Hobie Kayak Bream Series presented by Daiwa netted a full bag of Bream on both competition days with an accumulated weight of 3.81 kg, which fell short of the tournament winner by 1.34 kg, giving him an overall advantage in weight of .35 kg over the third place finisher Justin Dingwall.

Phayer summed up his two days on the water.

“Once I stuck to my plan, and went to where I wanted to go I found fish on the drop off’s”.

An excited Phayer has now qualified for his first Hobie Kayak Bream Series Grand Final in his maiden year of competing in the series.

Victorian angler and tournament Winner, Chris Burbidge bagged the tournament’s biggest fish which weighed in at 1.51 kg on the first day of the event. He happily took home the Hog’s Breath Café Boss Hog Big Bream cheque, winning it with no other challengers comming to the scales with comparable sized fish.

Burbidge netted his winning bream at 10:45am, on a Nories Laydown minnow after seeing some baitfish scatter along the shore line structure in Duck Arm.

On the hookup he knew his Big Bream was a “bag kicker” when it hit his lure as he watched on.

“Other than a surface take it was probably one of the best hook up’s I have witnessed”.

It’s time for all qualifiers to start planning for the grand final of the Hobie Kayak Bream Series presented by Daiwa which will be held at South Yunderup, Western Australia over the November 22-23.

Thanks to Alpine Country for providing dealer support and a BBQ and drinks on both days of the tournament. Like all of the events in the Hobie Kayak Fishing Series presented by Daiwa, this round could not have gone ahead without the great support of our generous sponsors Daiwa, Berkley, Atomic, Lowrance, Rhino-Rack, Strike Pro, Austackle, TT Lures, Yamatoyo, Ecogear, Power-Pole, Hog’s Breath Café and ABT.