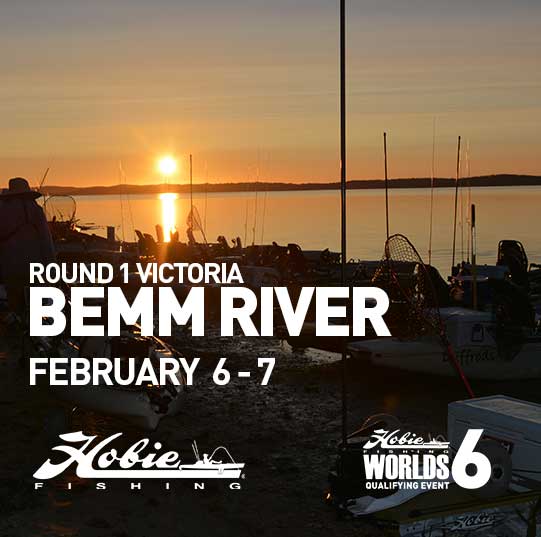 Anglers will hit the monster Black Bream of Bemm River with an absolutely, huge Bang! Let’s crack the ton for the first time. And with that, there’d be some big bucks in that prize pool. In 2016 Bemm River will also be the first in a series of five Qualifying Rounds for the 6th Hobie Fishing World Championship.. 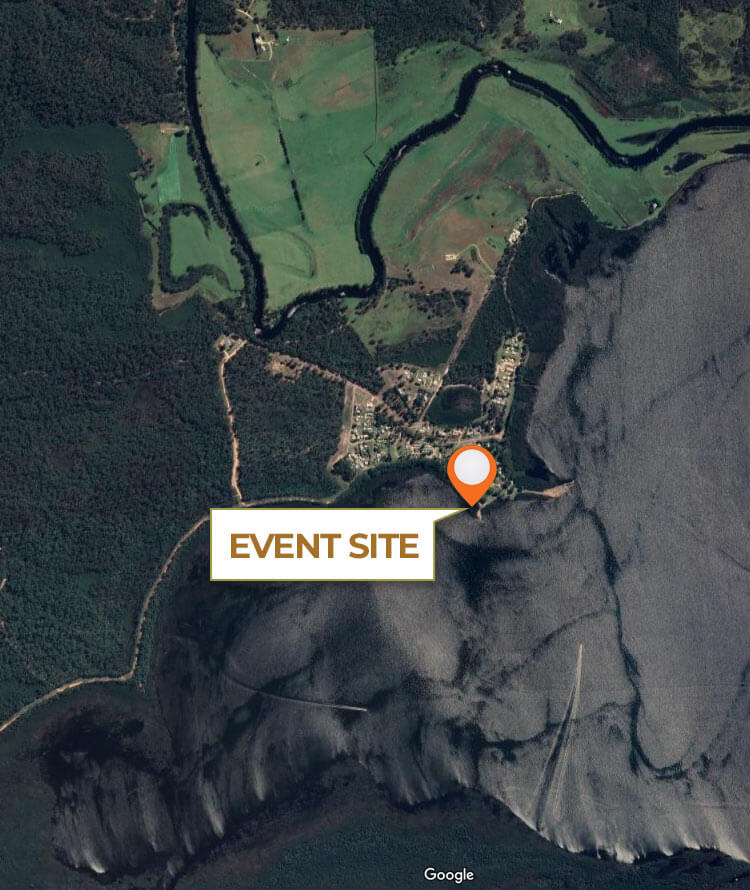 Day Two On The Water

In an epic start to the 2016 Hobie Fishing calendar, and the first of 5 qualifying tournaments for the 6th Hobie Fishing World Championships, 105 anglers descended on the tiny bream fishing mecca of Bemm River in East Gippsland, Victoria.

A favourite on the Hobie Fishing circuit, Bemm River always delivers the goods and once again did not disappoint. The tournament fell on the right moon with the mouth of the inlet which had been open for the past 7 months, finally closed just days prior to the competition. With the inlet mouth closed and water levels up, scattered cloud cover and reasonable wind conditions through most of the round, Bemm showed little sign of pressuring up under the weight of 105 Anglers.

Full bags were commonplace with 85% of the field returning to the weigh-in with three bream on both days of the tournament. Weights were impressive with the top 20 all weighing in 5kg and above over the two days.

A consistent performance from Chris Lyons from Rosanna in Victoria took him to the top of the leader board on the final day, moving up from third place and adding 2.6kg to his day one result for a total of 6 bream weighing in at 5.8kg.

Chris was followed Kevin Varty from Nowra in New South Wales, who held on to his day one 2nd position with 6 for 5.25kg. Paul Malov from Bentleigh Victoria rounded out the podium placings with 6 for 5.16kg.

Chris Lyons from Rosanna in Victoria roared to the top of the leader board on day two to take out the first round of the series and grab the lion’s share of points in the chase for a place on the team to represent Australia in the 2016 Hobie Fishing World Championship.

Strategies Day One: “I pre-fished Bemm on Friday to find spots that were holding fish and ended up at Mahoganies.

Where did you fish? “I headed straight back up to the entrance where I had located all of the fish the day before. I found the fish still there, and I worked a 100m stretch of bank and by 8am I had a 42cm and a 40cm. I kept working the edge and the flats in the same 100m area where there were plenty of fish in the low 30cm range. Everyone else who had been in the same location seemed to have left the area and moved down to the inlet opens in the estuary and were working the centre of the channel with vibes. There were plenty of boats in the area watching what we were doing. I kept working the edges and pulled in a 37cm on a Deep Diver Spike prawn pattern. I had my bag for the first session.

How were you feeling going into Day 2: “I have done 7 tournaments now and three at Bemm, I had a good bag on the board and knew it was really hard to come up with two big bags back to back. I was feeling really relaxed in the morning as I hadn’t really expected to do that well, and with the quality of the top 15 anglers with Paul Malov, Joel Crosbie and the like chasing me with just 400g separating us, it was anyone’s game. I was pretty happy with what I had already done but I was still hoping for fish”.

Strategies Day Two: “I went straight back to the front from the starting line to find 3 tinnies, who had been watching me catch the fish the day before, already sitting there lined up in the spot I had worked the day before. I went around them and on my second cast I hooked a 41cm Black Bream. Then the boats moved off the bank to follow another competitor when they saw him catching fish on vibes in the centre. I then moved back into my favoured spot but found nothing, so I moved right up to the front where the water washes over the bank (it wasn’t at the time) there were “yellows” and “blacks” up there and I got a 35 and a 38 and that was my bag for the day”.

Winning Ways: “Probably working that 100m stretch of bank and throwing into the edges and flats and not into the middle of the channel”.

Do you have a comment on the venue? “I really like Bemm. I would have to say that Bemm River and Marlo are my two favourite spots for catching bream”.

What are your thoughts on a worlds campaign, now you have made such a great start? : “I work for myself and it is really difficult to find the time to compete. I wasn’t going to try and notch up 3 world’s qualifiers before, but now that I’m leading with maximum points, I might have to try to find the time to head to Mallacoota and hopefully Forster”.

2014 Hobie Fishing World’s 3rd place getter, Kevin Varty from Nowra in New South Wales came into the round with low expectations not having fished Bemm River before.

“I normally like to fish deep and it was just really shallow. I headed up to the entrance and started throwing plastics in about 10-12 foot of water. When they started biting and I started landing them my first impressions changed”.

When asked if he was going to make run at qualifying for the worlds Varty replied,

“I’m just going to try and fish as many worlds qualifying rounds as possible this year and see what happens”.

Hobie has introduced divisions as an exciting way to encourage new anglers to try their hand at tournament kayak fishing. All anglers compete in the general category but there are also Youth (16-21), Women’s, Masters (60-64) and Grand Masters (65+) divisions which provide another layer of incentive to anglers.

Nathan Prezioso from Victoria took out the Youth Division with 6 for 4.52kg fighting off a strong performance from fellow Victorian Steven Pryke on 4.35kg. Prezioso went into day two trailing Pryke by 180g but his solid bag on day two allowed him to come from behind to give him a 170g lead and take home the inaugural Youth Division competition.

Michelle Carmody from New South Wales picked up the Women’s category with 6 for 4.3kg in an encouraging field of seven female competitors. Tracey Wright from NSW was leading the Womens Division on day one with a 2.44 bag, that had her in 17 position overall in the 105 angler field. Carmody sitting in 59th overall and 3rd in the Womens Division started strongly on the second day with early catches and bagged out on the way home to snatch the top female prize from Wright in the last half hour of competition.

In the tightest finish of the weekend Masters Division winner Tony Curwen from Victoria scooped the top spot with 6 for 4.35 nudging out Gary Hanson by just 10g. Curwen was leading on day one with 2.81kg to Hanson’s 2.21kg but just managed to hold out the strong 2.13kg day two bag of Hanson with his 1.54kg prize winning bag.

The Grand Masters Division was tight across the board with Allan Osborne from Victoria taking the top place in the category with 5 for 3.75 as well as picking up the Mortgage Corp Monster Mover for the most improved over the two days. 540g separated top to bottom over two days of tight competition. Osborne brought home a small bag of .83kg on day one and sat at the bottom of the division but he smashed it on the second day with 2.92kg and took home over $500 in prizes.

There was an amazing finish to the Hog’s Breath Café Boss Hog Big Bream competition with Aaron Williams (Vic), Michelle Gamble (Vic) and Paul Malov (Vic) all bagging bream weighing in at 1.24kg. Williams hooked his on a Flash J Grub 3.1” on a Decoy Violence 31F Jighead, Gamble caught hers on a ZMan GrubZ in Motor Oil on a Jig Pro Jighead and Malov also enticed his big bream on a ZMan GrubZ in Motor Oil.

Full results can be seen online at: https://www.hobiefishing.com.au/round-1-bemm-river-victoria-2016/

A MASSIVE DAY ON THE WATER

On the opening morning of the Hobie Kayak Bream season, a record field of 105 anglers pedalled off from the Power-Pole starting line in calm conditions at the iconic bream fishery of Bemm River in, East Gippsland, Victoria.

Bemm turned on the charm for this massive field and fishing throughout the day was excellent with over 80% of anglers returning to weigh-in with full bags of 3 bream. The fish were on the bite and hitting hard early in the session with many competitors looking for upgrades by 8:30am.

At the close of Day one, Rich Davies from Victoria is in first place with a full bag of 3 Bream for 3.12kg followed by Kevin Varty from New South Wales with 3 Bream weighing 2.9kg and Chris Lyons from Victoria is currently sitting in third with 3 for 2.85kg.

This year Hobie has introduced divisions into the mix as an exciting way to encourage new anglers to try their hand at tournament kayak fishing. All anglers compete in the open division as usual but there are now also Youth (16-21), Women’s, Masters (60-64) and Grand Masters(65+) divisions which should definitely keep things interesting at weigh-in.

Weigh in today was split to accommodate the large field. Half the field returned to the Daiwa event site at 2:30pm and the other half at 3:00pm. Tomorrow the order will be reversed to ensure that everyone has the same amount of time on the water.

At the close of day one 285 bream were brought to the scales with a combined weight 198.14kg before being returned to the waterway to fight another day.

With the final session of the event to be completed tomorrow we are in for another excellent day on the water.