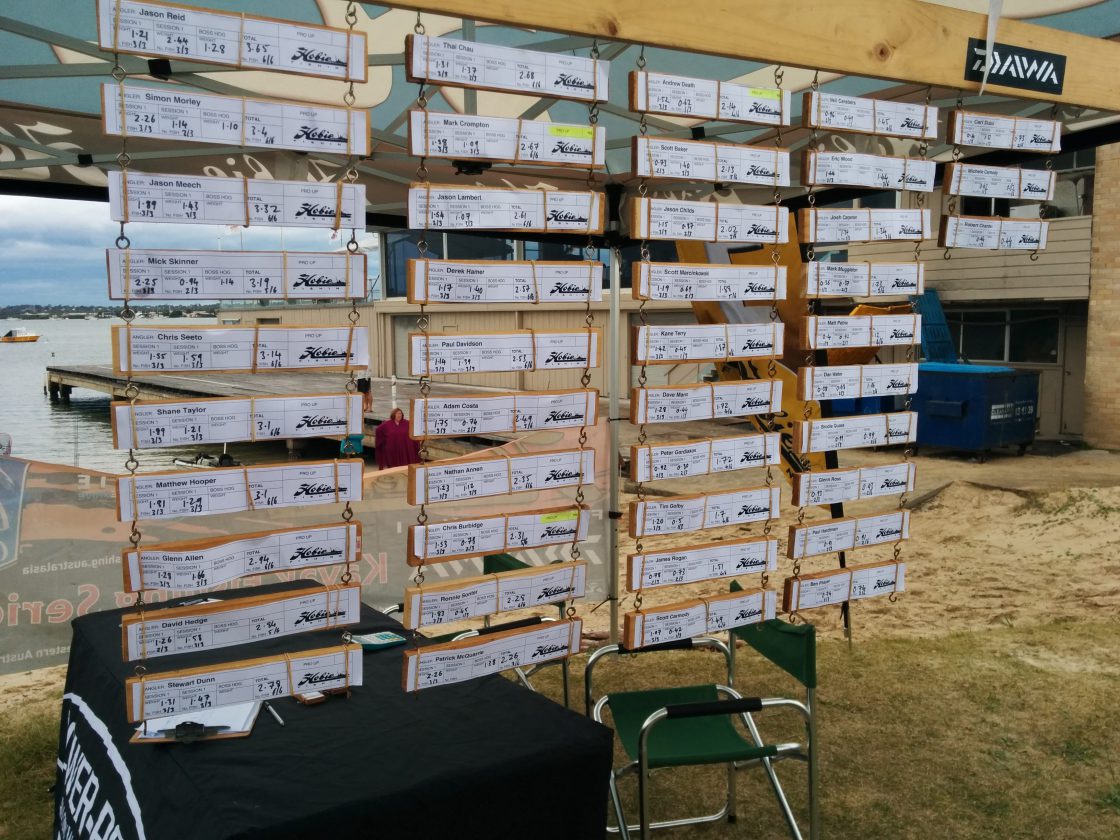 Parking
Kayakers will have to use the parking area at the back of the car park as not to affect patrons through the day. (We have had some anglers leave their cars in front of the club doors as well as in handicapped parks.

Jason Reid claims victory in the Georges River round of the 2014 Hobie® Fishing BREAM Series – Presented by Daiwa.

Jason Reid took first place on Sunday with 6 bream for 3.65 kg and a 250 gram lead over the nearest competitor Simon Morley. Morely who was equal first on day one managed to hold on to second place with 6 bream for 3.4 kgs but ultimately it was Reid who jumped 21 places to take the title on Georges River. Jason fished the back of Woolooware Bay, working the mangroves to get his day one bag of 3/1.21.kg on day one. Deciding not to leave fish to find fish, Reid hit the same area again on day two, this time slow rolling cranks over the flats to get his bag by 8:00am. He went on to upgrade twice by 9:00 and then as he was slowly making his way back before the wind got up, landed his 1.28kg “big one” to finish the day in first with three bream for 2.44kgs.

Second place getter, Simon Morely also fished in the back of Woolooware Bay behind the racks. Using Daiwa Black Labels and Caldia 2000s on lighter 4lb line to encourage the bite and then taking the challenge to get them out without getting broken off. Morley also fished the same area on both days. Day one started slowly until the advice of fellow angler Kane Terry on what lure the bream were hitting picked him up three solid fish for 2.26 kg and ended up placing him in equal first for day one. Taking the same approach on day two didn’t deliver as hoped and after going looking, Morley managed to pick up a few of smaller bream to hold on to second and qualify for the Hobie Fishing Worlds later in the year.

The Hog’s Breath Cafe, Boss Hog Big Bream Award goes to winner of Round 6 at Forster and already Worlds Qualified, Patrick McQuarrie for his day one monster weighing 1.38 kgs which he picked up on a Strike Pro, Cyber Vibe in black along two metre edge near Kogarah Bay. As expected, Georges river turned on some great fishing with conditions providing good cover and no shortage of options for kayak anglers with boat hulls, bridges, jetty’s, oyster racks and flats all producing good bream within easy reach from the launch location. Both Jason and Simon have now earned spots in the Hobie Fishing Bream Series Grand Final presented by Daiwa as well as their much saught after positions in the Hobie Fishing World Championships and would like to thank Hobie and the ponsors, Daiwa, Berkley, Atomic. Lowrance, Rhino-Rack, Strike Pro, Austackle, TT Lures, Yamatoyo, Ecogear, Power-Pole and ABT for making these events possible. Thanks also go to Australian Bass Angler for running an exceptional sausage sizzle.

Patrick McQuarrie and Simon Morley are tied in first place on day one of Round 9 in the Hobie® Fishing Bream Series presented by Daiwa, each weighing in 3 bream for 2.26 kg. Patrick also holds the lead in the Hog’s Breath Cafe Boss Hog Big Bream with his day one monster weighing in at 1.38kg With only 10 grams separating the top three, their nearest competitors are Mick Skinner with 3/2.25, Jason Meech 3/1.89 and Shane Taylor 3/1.89.

Georges river turned on some great fishing today with light drizzle and overcast conditions providing good cover and there were no shortage of options for kayak anglers on the hunt for bream as they headed out to hit, boat hulls, bridges, jetty’s, oyster racks and flats up and down the fishery.

The weather looks set to bring more wind and more rain tomorrow with winds expected to reach 20 kts around 1:00pm. Let’s hope it turns on the bite for day two of this Worlds qualifier.