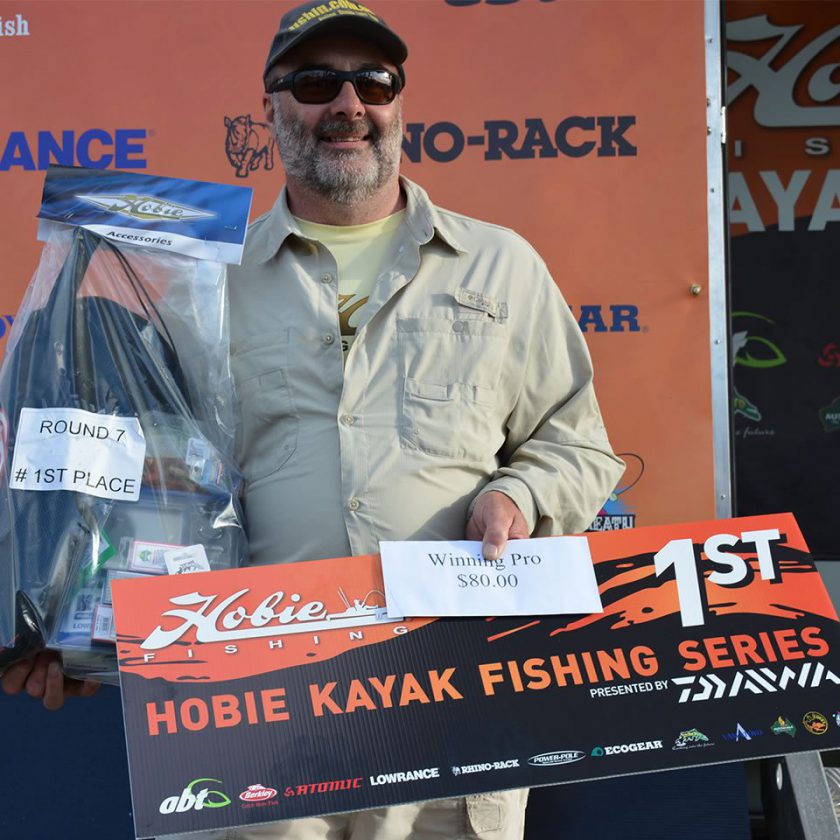 Burbidge turns on the charm in a tough bite.

In what was a difficult weekend’s fishing for most, Chris Burbidge has continued his winning form and secured another first place at Lake Tyers in Round 7 of the Hobie® Fishing Bream Series presented by Daiwa. This is his second win for the 2014 series having already taken out Round 1 in Glenelg while maintaining consistent top tens across the rounds he’s competed in this year.

Burbidge initially had some reservations about Lake Tyers after a particularly difficult pre fish.

“I had no confidence coming into the round. I’d pre-fished right up until the ban and hardly had a touch. On the friday before the pre-fish ban I came away with only two Bream for eight hours work.”

However, his concerns were unwarranted after a cracking start on day one where he delivered three Bream for 3.39kgs. Fishing the main lake, with a Norries Laydown Minnow in 2–3 foot of water delivered the goods and saw him bagging out by 7:40.

He continued to work the main lake until around 10:00 am before making his way up the system to deeper water where he changed up to a Jackall Chubby Vibe in Matt Black. Using slow roll with a long pause on some of the deeper drop off’s paid off with Chris catching 30 fish in total for the day with 8 upgrades.

“Day two was harder going with the reverse, chase start, there was a lot of traffic already on the main lake when I got there so I moved a bit further down the line and began throwing the Laydown Minnow again.”

The fish were still there to be had and Chris had his bag by 8:00am before deciding to once again move to deeper water and pick up day one’s pattern with the Chubby Vibe, a decision that lead to a total of six fish for the day with no upgrades.

Second place and a qualifying spot for the 2014 Grand Final was picked up Chesney Fung who spread out across the waterway looking to cover as much ground as possible on day one. Fung headed down the Toorloo arm early in the day before returning to fish the main lake, throwing a Jackall Chubby Vibe to secure his three Bream for 2.76 kgs.

Fung pedalled up the Nowa Nowa arm to the power lines on day two and continued to throw the Chubby Vibe, hitting the bottom with a slow soft lift on the retrieve to pick up his two fish for 1.85 kgs.

Chesney has been delivering some consistent bags through out the series and has now qualified for both 2014 Bass and Bream Grand Finals.

Third place and the second qualifying spot in the grand final was taken by Tony Pettie who also received the Hog’s Breath Cafe, Boss Hog Big Bream Award with his 1.48 kg Monster which he picked up in Black Snake Bite on the Nowa Nowa Arm using an Ecogear SX 48 Customised in muddy prawn by Geno Custom Lures.

Ecogear SX 48. The lure that did the damage.

Big thanks go to our sponsors, Daiwa, Berkley, Atomic. Lowrance, Rhino-Rack, Strike Pro, Austackle, TT Lures, Yamatoyo, Ecogear, Power-Pole and ABT for making these events possible. Also thanks to Alpine Country (Tackle World) SALE for running the sausage sizzle and all the competitors for a great, if challenging, weekend.

Hard work pays off on Day One at Lake Tyers.

Day one of the Hobie® Fishing Bream Series presented by Daiwa got off to a cracking start with 65 anglers hitting the water on time at 7:00am this morning. Good cloud cover and little wind made for easy kayaking if not easy fishing.

Rumours of the system fishing hard prior to the pre fish ban seemed to be true for the most part today with just over half the field presenting bags to the weigh master but those that did have bags to show were presenting some solid Bream with many anglers catching fish right up until the last half hour of competition.

Victorian, Chris Burbidge, winner of Round one of the Hobie Bream Series at Glenelg, took out the day with a full bag weighing 3.39 kgs. He was followed closely by fellow Victorian Jon Clisby with 3 Bream for 3.34 kgs and New South Welshman Jason Childs weighing in a full bag for 3.16 kgs. Tony Curwin (VIC) is currently in the lead for the Hog’s Breath Cafe, Boss Hog Big Bream with a cracking 1.33 kg Bream for Day one.

As is always the case, there are plenty of fish to be had, you just have to find them and with some solid starts from the top 10 there will be definitely be some catching up to do tomorrow.