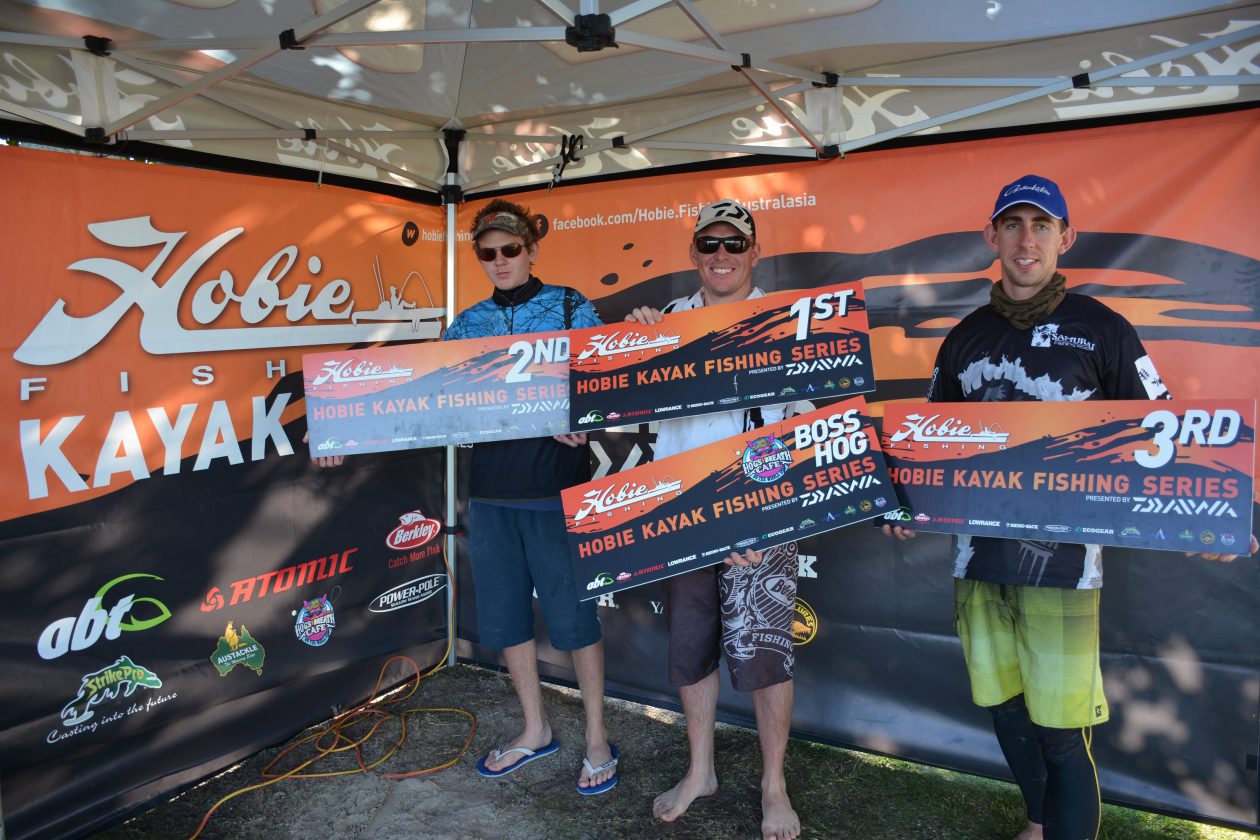 Luke Rogan from Brisbane Wins Round 12 of the Hobie® Kayak Bream Series Presented By Daiwa in Mooloolaba, Queensland

Over the weekend of August 16 and 17, 2014, the host township for round 12 of the Hobie® Kayak Bream Series presented by Daiwa was the Queensland tourist haven of Mooloolaba, situated on the Sunshine Coast, north of the state capital of Brisbane.

Most importantly though, it’s river, estuary system and canals are teaming with yellow fin bream, making it a perfect location to showcase a Hobie Fishing Series tournament.

Unusually wet conditions for the Sunshine Coast tested the anglers on day one but around 50% of the competitors returned home with full bags of four bream including upgrades.

Day two conditions were an improvement over the trying weather of Saturday with patchy light showers and some dark clouds surrounding the arena providing cover as the anglers crossed the Power-Pole starting line. By 10:30am however, the sky was a brilliant blue with glassy conditions on the water in the canals, around the marinas and the trawler wharfs.

Luke Rogan from Brisbane has been close to taking out Hobie Kayak Fishing Series rounds in the past but it was round 12 and his ability to adapt to the changing conditions that saw Luke take his first win.

Luke likes to fish Raby Bay Canal (a canal system in Morton Bay) and he believes that his experience with the similar man made structure like pontoons and canals helped him to win at Mooloolaba.

“On the first day of the event it rained all day, it dirtied the water up a little bit, but it turned them on, the bite was happening and I probably caught 50 fish, all legal. But I could only get a couple that were big enough to keep all day so I just kept upgrading and upgrading the others”.

Luke’s original plan of attack on day one was to fish the Newport Canals, find the current and stay in that current away from the dirtiest water.

He used a Zip Bait Khamsin Tiny in Mist Wakasagi in the dirty water caused by the rain.

“I’m pretty good at casting but these lures just make me better, I can get them where I want under the pontoons”

Luke was coming second at the end of day one with a 4 from 4 bag weighing in at 2.11kg trailing the leader Michael Halliday by 110 grams.

“Today I just went and found the clean water. As soon as I found that clean water it was the complete opposite, I’d gone from finding the dirty water yesterday to the clean water and that’s what did the trick today”. Said Luke on his technique on day two.

Luke also changed the colour of his lure to a Ghost Ebi, to suit the differing day two water conditions.
Luke used a slow, steady retrieve for the lure, keeping the rod tip in tight and hard against the pontoons and slow winding it out. He left the lure about 1m out from the pontoon for a short while and attracted the fish out from under the structure. He paused, suspending the lure in the water then twitched it, which tended to make the fish aggressive and then they would eat it.

Luke finished the day with a 2.39kg bag giving him a two day overall bag weight of 4.500kg with 8 from 8 fish just 5 grams ahead of second place getter Tyson Hayes.

Luke qualified for the grand final last year and missed it due to the trip he goes on with his mates to Weipa each year. With the pre-planned trip to Weipa, clashing with the grand finals for the second year in a row, Luke now he has some serious talking to do with his mates.

Luke learnt from the experience of losing too many big fish on line as light as 2lb over the years that 6lb straight through was the winning edge he needed on the day, landing every fish he hooked on Sunday including his Hog’s Breath Café Boss Hog Big Bream.

Tyson Hayes Second Place – So Close but So far

Having taken third place in round 11, Tyson Hayes demonstrated he is a consistent performer finishing on the podium in two consecutive events. This time he took a step up to second place in one of the closest results seen since the inception of the Hobie Kayak Bream Series, Tyson was eventually beaten by a mere 5 grams.
Starting out using the very popular, in Queensland fisheries, Atomic Shad 40mm hardbody in Ghost Gill brown to get smaller legal fish to fill his bag, Tyson then went on to use the new, yet to be released on the market, Crusty Zman with a 1/16 hidden weight jighead around the trawlers.

Tyson’s Day one bag weighed in at 1.880kg putting him in reach of the lead and he brought in the biggest bag on either day of the tournament with 2.615kg on day two. His overall total of 8 from 8 fish had a bag weight of 4.495kg with his biggest fish over the two days coming in on day two and weighing 895g.
Tyson qualified for the Hobie Kayak Bream Series Grand Final and was quick to say that he would be definitely heading across to Western Australia to compete in the championship event.

As well as winning the tournament Luke Rogan also bagged the Hog’s Breath Café Boss Hog Big Bream cheque. He landed a nice .720kg bream on day one to lead the field with the biggest bream, but outdid himself and all other anglers on day two with a tournament winning 1.025kg bag kicker.

Once again we have to thank Mal and Trish Gray and Peter Budd from Sunstate Hobie (sunstatehobie.com.au) for providing dealer support to the competitors throughout the tournament and for supplying them with snack packs, drinks and a bbq on both days.

Like all of the events in the Hobie Kayak Bream Series presented by Daiwa, the Mooloolaba round could not have gone ahead without the great support of our generous sponsors Daiwa, Berkley, Atomic, Lowrance, Rhino-Rack, Strike Pro, Austackle, TT Lures, Yamatoyo, Ecogear, Power-Pole, Hog’s Breath Café and ABT.The first day of round 12 of the Hobie® Kayak Bream Series presented by Daiwa, being held in Mooloolaba over the weekend 16-17th August 2014, started with cloud bursts of heavy rain that looked ominous at times, but the predicted 25kph breeze never eventuated until the closing half an hour of the session. The breeze was generally very light in the shelter of the canals, producing glassy conditions, which continued throughout the day. The only obvious marks on the water were the ripples created by water droplets from the light to very heavy rain, saturating the anglers but not dampening their competitive spirits.

Plenty of fishing location options are available in the arena, from pontoons and jetties, to boat hulls including commercial fishing trawlers, oyster covered rock walls, bridges and pylons.

Out on the water the fish were biting and gear choice made the difference between tentative nibbles at the lure or a commitment to an aggressive strike. Most anglers came to the scales with bream in their bag and some had achieved their full bags of four bream in the first hour and a half of fishing. While the weather conditions were tough on the competitors, the fishing was generally quite good and numerous anglers landed over twenty bream with no other species hitting the lures.

At the close of the session Queensland angler Michael Halliday with a full bag of four fish weighing in at 2.220kg leads the field followed by Luke Rogan with 4 from 4 at 2.110kg and Warren Cossell with a full bag at 2.050kg sitting in third place.
More than 10 anglers are within striking distance of a podium finish but it will certainly take a full bag and a very good one to be in contention.