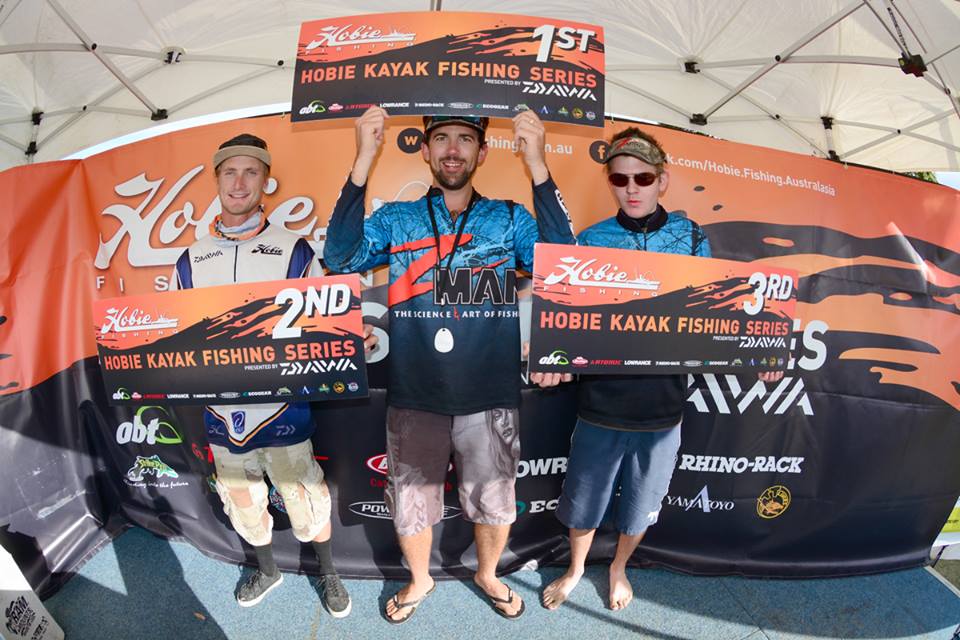 Back to back Queensland state titles for Will Lee.

The Gold Coast, normally known as a tourist mecca, is also renowned as a great competition fishery. The location proved a worthy venue for a Hobie fishing series round and state championship. Fantastic weather, excellent fishing and great sportsmanship made this a truly memorable event.

Will Lee from Redcliffe won the 2013 Queensland State Title last year at his home fishery and he has followed it up with a win over the weekend on the Gold Coast, to make him a back to back state champion. He has also secured a spot in the Hobie® Kayak Bream Series grand final to be held in November this year.

Some advice from a friend, “if you are going to get a big fish, you’re going to get it in the river”, was the motivation for Will’s day one strategy and he pedalled the long haul straight for the river.

Hoping to get a couple of big ones early, he fished tight to pontoons, skip casting the little grubs up into the nooks and crannies but all he could find were plenty of smaller bream.

“I was using heaps and heaps of Pro Cure Mullet and just letting them sit and letting the fish pick them up, so it was important to watch that slack line”, he commented.

Will bagged out (4 bream) by 9:30am on the first day and then moved to fish under bridges in the slack water, snaring a couple of upgrades while continuously catching small 27 tip fish.

“Heading back to the launch position I spotted some big bream but with the clear conditions I just couldn’t get them to bite”, he said.

Will finished day one in range of the top positions with a full bag weighing in at 1.62kg

With the wind picking up early, Will headed back to where he’d seen the big bream on day one, just 350m from the start line. His plan was to spend as much time as possible fishing rather than travelling long distances to and from more remote fishing grounds that had been his day one strategy.

Using his PowerPole regularly in the windy conditions, Will targeted the corners of the canals with the southerly wind blowing onto them. He focused on pontoons with water slapping up against them, allowing him to skip cast hard and not worry about the lure hitting the side of the structure.

Will used lots of his “Go to” scent, Pro Cure Mullet on both days, caking as much as he could on the lure body, in fact anywhere he could. “It’s a lot like bait fishing”, he mused.

Will kept a close eye on the slack line and slowly wound it in, a technique that netted him about 20 legals on day two. The action hottest between 7am and 9am and he managed to upgrade every hour after that to bring back a 2.49kg bag to weigh in and to his surprise, giving him a winning two day total of 4.11kg

Overjoyed with his back to back victory, his only disappointment was that it wasn’t a Hobie Fishing World’s qualifier.

Will reckoned his use of wads and wads of Pro Cure Mullet scent, his PowerPole and his polarized sunnies were keys to his success.

Former New South Wales angler and a recent resident of the Gold Coast Bryce Beechey, had a consistent weekend and held onto his day one second position to secure second place with another consistent full bag of good sized keepers on day two of the event.

Beechey had a solid 2.24kg bag of four bream on day one and followed it up with a smaller but good enough bag of 1.84kg on day two to give him a two day bag total of 4.08kg

His plan of attack on day one was to fish the pontoons, sand edges and bridges, mixing it up with any structure that he came across.

“Day one was better around the pontoons and because the wind picked up heaps on day two I caught a lot of fish on the sand edges just drifting down with the wind”.

In a display of good sportsmanship, Bryce Beechey generously donated his prize pack to an appreciative fellow competitor whose double doughnut became a little tastier.

Brisbane angler and day one leader, Luke Rogan, bagged his .91kg big bream on the first day of the tournament. He managed to happily take home the Hog’s Breath Café Boss Hog Big Bream cheque as surprisingly there were no challengers coming up to the scales on day two.

Luke netted his winning bream at the turn of the tide on a Zip Baits Khamsin Tiny Deep while cranking along pontoons and boat hulls a fair way up the main channel in the Nerang River.

Luke knew his Big Bream was a better class of fish as soon as it hit the lure. “They don’t tend to fight the bigger ones, they’re a bit docile and sluggish, they’ve just got power so you’ve just got to get them out as quickly as you can. The littler ones gave me a lot more stick”, he said.

Once again we have to thank Mal and Trish Gray and Peter Budd from Sunstate Hobie for providing dealer support to the competitors throughout the tournament and for supplying them with snack packs, drinks and a bbq on both days.

Like all of the events in the series the Gold Coast round could not have gone ahead without the great support of our generous sponsors Daiwa, Berkley, Atomic. Lowrance, Rhino-Rack, Strike Pro, Austackle, TT Lures, Yamatoyo, Ecogear, Power-Pole and Hog’s Breath Cafe . Thanks also to Elliott and Aiden from ABT for running a great event.

Luke Rogan leads with a full bag of four fish weighing in at 2.30kg

Day one of round 11 of the Hobie® Kayak Fishing Series presented by Daiwa was held in excellent conditions on the Gold Coast canals today. Although the predicted wind stayed away it was very cold out on the water until around 10am when the Queensland sunshine warmed things up.

Most anglers chucked lures at the pontoons, bridge pylons and boat hulls but there was also plenty of opportunity to cast along the edges of oyster covered rock walls and mangroves. The tide ran out hard for the first few hours of competition and while the fish were not attacking the lures they were biting and patient anglers using the right amount of finesse were bringing fish aboard right from the start of the day. Most anglers who had a full bag of four fish caught them early in the session but generally fish were quite small. Bryce Beechey from the Gold Coast said, “It was tough out there trying to get something of a decent size”. Most anglers threw the proverbial tackle box at the fish and there were plenty there but most were under legal size. All in all it was a pretty tough day on the water.

At the end of the day one of the round the tournament leader is Luke Rogan with a full bag of four fish weighing in at 2.30kg. Luke is also ahead in the Hogs Breath Café Boss Hog stakes with the biggest fish of the day coming in at .91kg. Second place overall for the day went to Tyson Hayes with 2.27kg, followed by Bryce Beechey with a full bag weighing 2.24kg.

With only 295 grams separating the top six places we are in for a tight finish to the round. Tomorrow we’ll have a new state champion and any number of the field have a chance to catch the title.