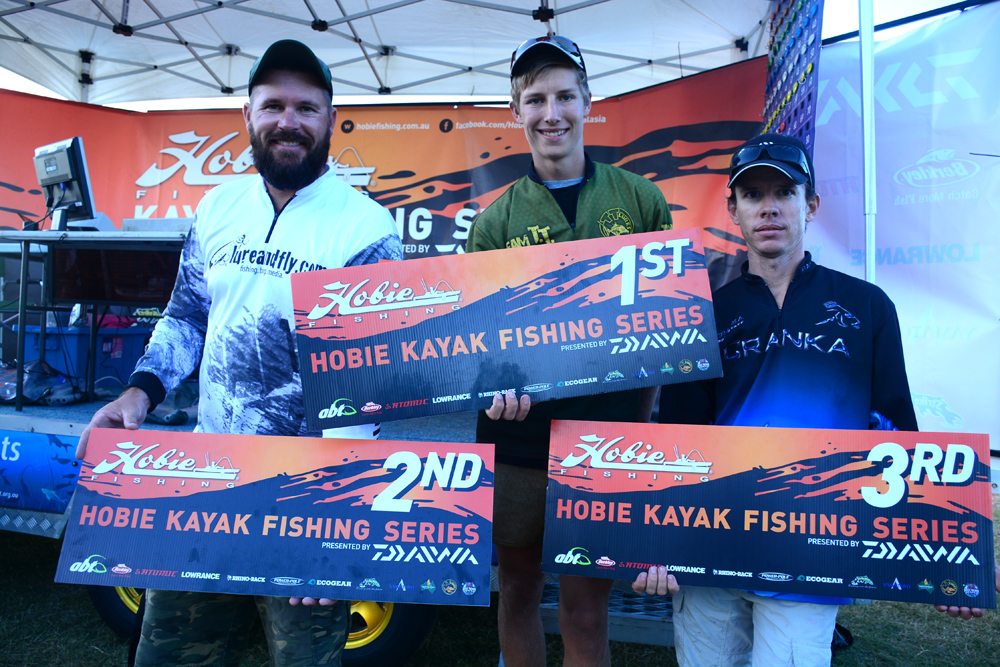 James Howarth takes out the Redcliffe round of the 2014 Hobie® Kayak Bream Series – Presented By Daiwa.

The weekend of the 21st–22nd June, 2014 saw the Hobie® Kayak Bream Series presented by Daiwa head to Redcliffe, one of Queensland’s most iconic and notorious Bream tournament venues. Some 33 anglers descended on the venue, all determined to put themselves at the top of the leader board and to book their spots at the Grand Final later this year.

Redcliffe, just 40km North of Brisbane, has seen some incredible tournament bream action over the years and has once again delivered the goods. The venue offered up fantastic Queensland conditions, great fishing from the reef as well as the man made structure of the jetties and boat hulls in the marina and canals. This ensured plenty of options for the competitors and a great weekends fishing for all.

Ultimately it was Brisbane year 12 student James Howarth who claimed the major prize on Sunday bringing in eight bream for a total bag weight of 4.91kg which gave him a convincing 1.27kg lead over second placed.

Seasoned competitor and Lure and Fly contributor, Josh Carpenter, whose two day bag totalled 3.64kg took second after improving on his day one, tenth place. Howarth ensured his Redcliffe victory by weighing in the two largest bags of the tournament.

James, in only his third kayak tournament, fished smart on day one, pre-fishing for day two and leaving some key areas to target on the second day of the competition. He spent both days hitting fish under and alongside the boats and jetties of both the marina and the canals, casting along the edge of shady patches using lots of Pro Cure Scent.

I was pretty nervous coming into the second day as there were a lot more boats heading into the canals and the marina so I thought it was going to get hit a lot harder than on day one.

Early on both mornings he cranked these areas using Ecogear SX40s and as the light improved he threw Zman 2.5” Bloodworm Grubs, using a Nordic Stage Sharpshooter with 4lb line straight through.

I used some pretty aggressive flicks of the rod after getting the lure down under the boat hulls and then a pause at the ends of the boats, suspending it there and they would just smash it.

James was excited about his first major tournament and qualifying for his first Hobie Bream Series Grand Final, which fortunately for him, will be staged after he has completed his final year twelve exams.

James used plenty of Pro-Cure scent with an aggressive retrieve in the shady patches around and under boat hulls in the marina and canals.

Josh Carpenter takes second and wins the hearts of the crowd.

Southern New South Wales angler and the eventual second place getter Josh Carpenter’s plan was always to fish the canals once the weather forecast predicted light winds. With the canal system being protected from wind most of the year Josh instinctively knew that the fish there were used to still conditions and didn’t spook as easily as the fish out on the reefs, so he did the 35minute pedal to the canal system straight off the Power-Pole starting line each morning.

Sitting in tenth position at the end of day one with a full bag weighing in at 1.74kg Carpenter was always confident that he would get his four fish on day two. His only concern was just how big those fish would be, as he was giving away a big start to day one leader Howarth.

He worked the edges of the man made structure and boats and had three good bream in his Hobie livewell® before 11am. With three hours to go in the competition he was confident of catching his final bream and then hoping for some good sized upgrades. He got that fourth fish at about 12:30 but did not manage to upgrade and headed to the reef for a short time to see if he had some better luck there but time worked against him and he headed back to the weigh-in with four good fish.

Josh was extremely happy with his second place finish and won the good sized local crowd over watching the weigh-in by breaking his prize pack open and handing out the valuable contents to enthusiastic local children in the audience as their appreciative parents watched on.

Like the event winner and runner up, Jason caught the Boss Hog Big Bream by working the structure inside the canals. It helped take his day one bag to a healthy 2.19kg and into fourth place on the day. With only three fish in the well at the end of day two he fell one place and ended the tournament in fifth position.It’s not just the weather and the fish that make an event great, thank you to Mal and Trish Gray and from Sunstate Hobie for providing dealer support to the competitors throughout the tournament and for supplying them with snack packs, drinks and a bbq on both days.

Like all of the events in the series the Redcliffe round could not have gone ahead without the great support of our fantastic sponsors Daiwa, Berkley, Atomic. Lowrance, Rhino-Rack, Strike Pro, Austackle, TT Lures, Yamatoyo, Ecogear, Power-Pole, Hog’s Breath Cafe and ABT for making these events possible.

Large numbers of bream were spotted all morning around the reef area but a great deal of finesse was required to get the fish interested in the lures presented to them due to the very clear water and glassy conditions. The predicted 10kph breeze never eventuated during the session with strongest breeze of the day at around 5kph in the final hour of the day helping to provide a little more cover than had existed throughout the day. At the end of weigh-in on day one, seventeen year old young gun James Howarth from Brisbane finished at the top of the field with a bag of four bream weighing in at 2.55kg. Howarth said “ I am not a regular in this fishery and I just winged it for the day, but I fished smart and left some key locations for day two”. South Brisbane’s Denis Metzdorf bagged four fish for a total of 2.36kg with a kicker of .86kg which was the second biggest fish of the day.