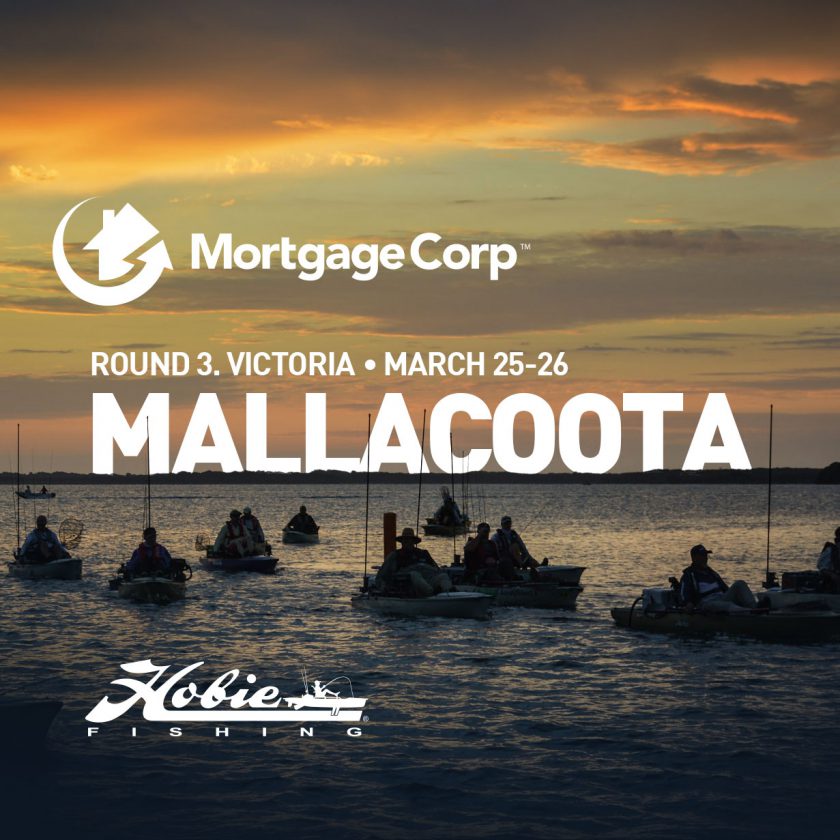 Monday 13th March up to and including Thursday 23rd March.

Crossing of the bar at Mallacoota Inlet.

Strictly no camping on Mallacoota foreshore!

Day One – On Water Action

74 anglers from Victoria, New South Wales, South Australia, Queensland and the Australian Capital Territory headed to Mallacoota in East Gippsland, Victoria to compete in Mortgage Corp round 3 of Hobie® Kayak Bream Series 9, over the March 25-26 weekend.

After a tough Pre-Fish Day, where a lot of anglers struggled to find abundant fish, the first day of competition saw conditions that looked promising for a good catch, with overcast skies and a breeze on both Top and Bottom Lakes. By the end of the session a reasonable number of anglers pulled in solid bags, with other competitors struggling to find enough fish to fill theirs. Nevertheless, 55 anglers brought back fish to the Strike-Pro Weigh-in, 18 with full bags of 4 fish. The field was led by Richard Somerton with his full bag of 4 fish for 3.64kg, followed by Bogdan Zisu with 4 fish for 3.50kg and Tony Pettie sitting in third place with 4 fish weighing 2.97kg.

As the sun rose over the Pro Lure Arena and competitors raced away from the Power-Pole Starting, in clearing skies and with very little wind expected throughout the day, anglers were in for a second testing day of competition, with very little cover to entice fish to venture out of the hides. Despite second, hard day of fishing, that did not produce the Mallacoota Magic anglers expect from the inlet, 28 full bags were still brought back to the Strike Pro Weigh-in, with a total of 121 fish weighed-in on the day. 65 of the 74 anglers caught fish of the two days of competition.

Richard Somerton, from Mount Martha in Victoria, took out his second tournament from the three that have been contested, so far, in the 2017 series. Somerton spent the day out on the water on Friday making to most of the opportunity the Pre-Fish Day offers anglers.

“Pre-Fish Day on Friday was so-so, I went down to the Dead Finish on a little reef back in there. I found there were a couple of fish on it (the reef) and I threw top water at them, I pulled it away and left them alone. I continued to check out some locations and ended up with about a dozen fish by the end of the day. I thought to myself, ‘Ok, great! They’re around’, and I was ready for day one of the comp”.

“On day one of competition, when it was announced that we were chasing four fish, I knew I had to go at it hard. So, I virtually just worked the whole of Dead Finish Bay, slowly and methodically hitting everything that I could. I found a lot of muds, and fish mudding in there, and I managed to get a bag nice and early, which brought a smile to my face. From there I just slowly upgraded throughout the day”.

“In the last 45 minutes to an hour, of the session ending, I wacked, two slightly better fish, which made me even happier. One was on a Cranka Crab, which I’ve changed the hooks on, and the other I got by rolling a Crank in Beer Bottle”.

“Today (Day Two) when I went out a lot of other people went down to the Dead Finish, there were a least a half a dozen yaks down there first thing in the morning with me. So, I decided to leave and hit Gravelly Point. When I got there, I dropped a fish, which was certainly a good legal, on probably my fourth cast. Then I got a little one in the yak and I was on my way.”

“From there I went around the corner and got a nice 750 ‘grammer’ on plastic. Then I shot across to the other side of Dead Finish Bay where there are some muds, I worked in there and managed to get my bag and a small upgrade. That put me on just under 2kg and they stayed there, in my live well, from about 20 to 10 (9:40am) right through until about 1:30pm, when I pulled into two bays at the top of The Narrows.”

“I upgraded one of the fish straight away, an 850 ‘grammer’ and went into the next bigger bay. In there were a lot of fish feeding actively, sort of mudding and I’ve managed to get two, (1) kilo plus fish, and upgraded the two, other fish I had in my well. That left me about a half an hour to get back, so I motored on back to the event site.”

“Over the day, I was using a variety of tackle because the fish were so spooky, but I had a few majors to go to.” 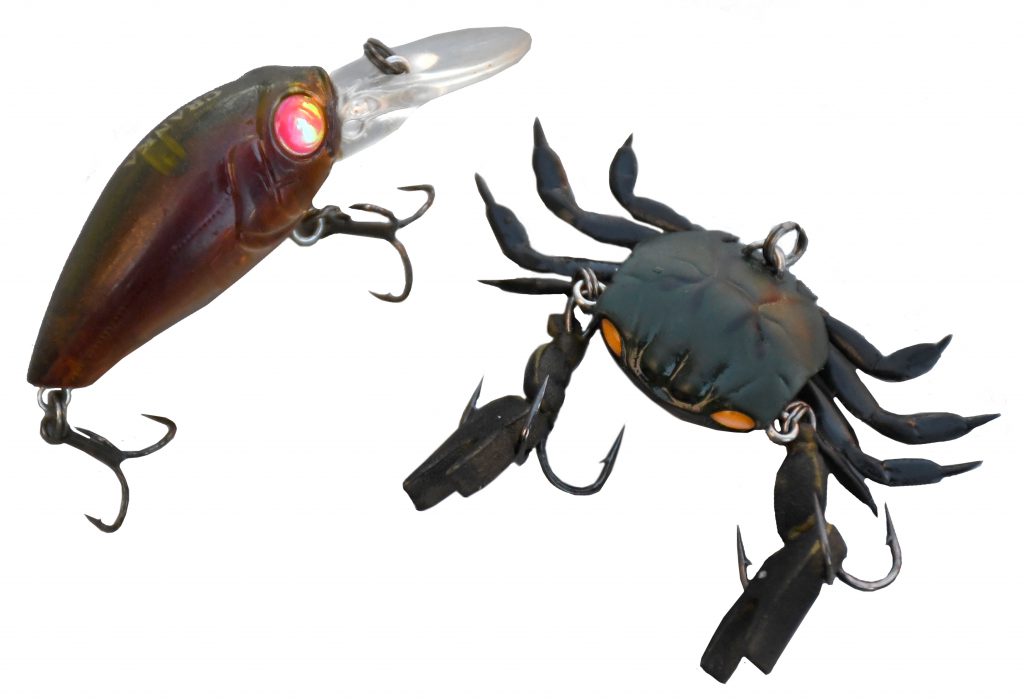 Like Richard Somerton, second placegetter Bogdan Zisu, from Victoria, took advantage of Pre-Fish Day on Friday to test out locations where fish may be congregating, see how active they were and what presentations were enticing the bite.

“It all started for me on Pre-Fish Day, but it was a very tough day on the water. I did a full lap of Bottom Lake and only found one fish, in one area and decided to leave that area alone. I headed to Top Lake and again just found a single fish. I just couldn’t back it up. So for the competition on Saturday and on the Sunday I decided to start by going back to Bottom Lake.”

“When I got back there, on day one of competition, the fish were there, in good average size.  I grounded it out, landing a fish every hour, to an hour and a half, throwing brown, Suji Shrimp Jackalls.  I was just taking them over a drop off, slow rolling from very shallow, to one and a half metres, and they were just hitting it. They loved it!”

“About one o’clock, when the wind picked up, I made my way to ‘the sands’, Goodwin Sands, and there were fish all over it. I was throwing Zman Slim Swimz and I managed to upgrade two or three times in the last hour and a half of competition.”

“I pretty much had a mirror day of that, on Sunday. I went straight back to the same spot I started at on Saturday and got my bag of reasonable sized fish. Again, at about 1 o’clock when the wind picked up, I got back on ‘the sands’ and caught plenty of fish, but I wasn’t able to upgrade. I headed back home hoping I had enough in my bag to at least hold my second position from day one, and I did it!”

Glenn Allen from the New South Wales Central Coast caught the largest fish of the tournament, and won the Atomic Big Bream $100 cash prize.  His Atomic Big Bream, came out of a back bay, in Bottom Lake. The fish was caught rolling a lure down the side of a fallen dead tree. As soon as, the lure got to the end of the tree, the fish chased it and hit hard, the fight was on!

“I got the nose of the Hobie facing out to open water and started pedalling the MirageDrive like mad.  I got it out in the clear, before it tried to head back home to the tree. I had no choice but to lock up, drop the rod tip under the water, and pedal hard and turn the fish before it got back in under the tree.”

“I got it out in the middle of the bay and wore it down before getting it in the yak. I thought no wonder the thing went so hard, it was a big Yellowfin (bream), which can pull a Black Bream inside out. First thing that came to mind was how did I land that?  I think I just got lucky.”

The Mortgage Corp Monster Mover prize, went to Michelle Gamble from Mallacoota in Victoria. Michelle moved up from no fish and equal 55th place, on the Rhino-Rack Leaderboard, at the close of day one, to finish in 38th place with a 3 fish bag of 1.82kg.

Lowrance round 4 will be fought out on Port Adelaide River in the heart of Adelaide, the capital city of South Australia, on April 8-9. We hope to see a great turn out from the local “Crow Eaters”, and it’s an excellent opportunity for interstate anglers to get a taste of vintage SA. Register on-line at hobiefishing.com.au

Thanks to all anglers for your participation and support of Hobie Kayak Bream Series 9. See you all in Adelaide.

As the rising sun broke through the low cloud, covering Mallacoota Inlet, in East Gippsland, Victoria, 74 anglers pedalled off from the Power-Pole Starting line in search of the early morning bite in Mortgage Corp round 3 of Hobie Kayak Bream Series 9. The third tournament in the 2017 series has attracted anglers from Victoria (VIC), New South Wales (NSW), the Australian Capital Territory (ACT), South Australia (SA) and Queensland (QLD), emphasising the national nature of the Hobie series in Australia.

After a tough pre-fish day yesterday, it was another hard slog for a lot of anglers in day one of competition, with 18 anglers arriving back at the Hobie Polarized Event Site with their full bag of 4 legal bream. Those who managed to fill their bags also found it difficult to find upgrades throughout the session.

The trying conditions were reasonably similar across the system with a total of 55 anglers catching legal sized bream. A total accumulated catch of 139 fish is an unusually small number for Mallacoota, a renowned bream fishery which often produces a magic catch. The 139 bream weighed in at 88.06kg, just on average weight for the East Gippsland waterway. After the Strike Pro weigh-in all fish were released and swam back out into local marine environment.

Day one leader is Victorian, Richard Somerton with a 4 fish bag weighing in at 3.64kg. Holding second place is Bogdan Zisu from VIC with 4 bream for 3.50kg and also from VIC, in third place, is the man who has been on fire in all three rounds of the series so far, Tony Pettie from Traralgon with a 4 fish bag of 2.97kg.

Glenn Allen from the NSW central coast bagged the biggest bream of the day and leads the Atomic Big Bream prize with a 1.18kg Black Bream. Tameika Purnell from NSW is in front in the Women’s Division, with 3 bream for 1.74kg. Leading the Youth Division is Jack Gammie from NSW with 4 for 2.51kg, the Masters Division is led by Gary Hanson from VIC with 4 for 2.70kg. Alan Osborne from VIC heads the Grand Masters bringing in 1 fish weighing in at .64kg.

Tomorrow anglers will be chasing a 3 fish bag, and with the weather conditions promising a break up in today’s cloud cover, and the wind fall back to around 10km/h in the open areas of the inlet, it should make for another tough day on the water, especially in the protected areas away from the breeze.

Anglers register at 6:00am for a 6:30am briefing, when the sessions the start and finishing times will be announced by Steve Fields, the tournament director. Around 4pm tomorrow we will know the winner of Mortgage Corp round 3 of Australia’s only national kayak fishing series.