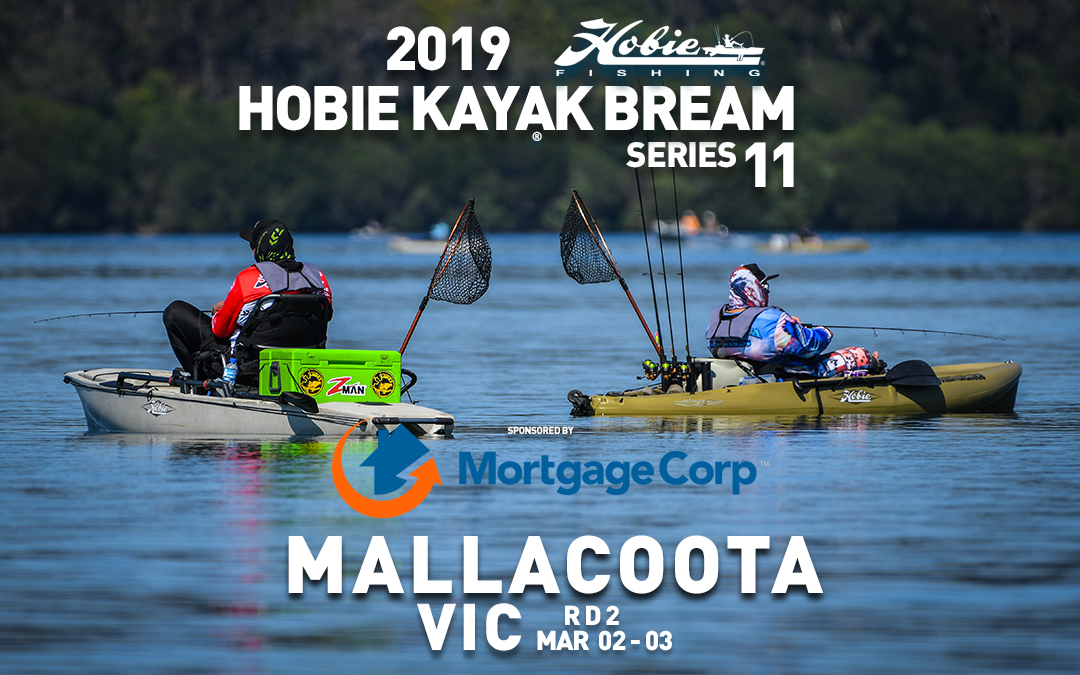 Strictly no camping on Mallacoota foreshore! Please help us support the Mallacoota community by camping in official camping spots only.

The ocean side of the Mallacoota Inlet Bar is out of bounds.

Day 1 6:00am. Day 2 Registration time will be announced at briefing.

Mortgage Corp Round 2 of Hobie Kayak Bream Series 11 at Mallacoota in Victoria was contested on the weekend of March 2nd and 3rd. 82 of the best kayak anglers from Victoria (Vic), New South Wales (NSW), South Australia (SA), the Australian Capital Territory (ACT) and Queensland (Qld) competed in the tournament.

Day one skies were clear and due to the front of the system being closed for some time there was no tide running, the wind was blowing from the N-NE and averaging 17kts with the strongest gust getting up to 20kts. In the conditions, in exposed areas, the Power-Pole Micro anchoring system was a godsend to those that had them.

There was a mixed success rate on the day with some anglers catching huge bags, and a lot of the remainder of the field struggling to catch fish.

The first angler to get on the weigh-in stage was Dale Baxter (Vic) who measured a corker of a bag at 2.97kg. He was able to hold on and go into day 2 at the top of the leaderboard. Baxter had started his day at “The Sands” and worked up to Fairhaven, at the back of the Arm. He not only ended the day with the heaviest bag, but also set the standard for the Atomic Big Bream with his biggest fish of the day weighing in at 1.15kg.

On the first day 108 legal bream were caught weighing 78.87kg with an average fish weighing just over 730g. Struggling anglers saw that there were plenty of big fish out there, and for many, new strategies were hastily being formulated for day two.

On Sunday, the second day of the tournament, with many anglers moving from the areas where they had no success the previous day, 127 fish were caught weighing in at 91.16kg. The two-day total moved up to 235 fish at 170.03kg, with an impressive average size of 720g.

In a lighter breeze than day one and blowing from the north at 8 to 12kts the highest gust only got up to 14kts. The clear skies of day one gave way to very high cloud cover that just seemed to wash the blue into a light grey.

With their revised plans in action only 15 anglers hit the top lake on day two, where almost three quarters had fished the day before with little, or no success.

At the top end of the weigh-in, Dale Baxter stood with the biggest two-day accumulated bag, and only a handful of anglers to follow, until Simon Morley (NSW) hit the stage with his day two bag of 2.63kg. Baxter was gone and Morley was the new man in the Hotseat, with just two anglers still to weigh in. Mitch King (Vic) was up next and failed to knock Morley off his perch finishing in 6th place. Up stepped the final angler, round one winner Tony Pettie (Vic) who was sitting in second position on day one, just 20g ahead of Morley.

The bag went on the scales and boom! 2.66kg, Pettie had done the double, two wins from two starts.

Two rounds into series 11 and Traralgon angler Tony Pettie, now had both in his bag. The perfect start to the season sees Pettie already with 200 Angler of the Year (AOY) points and, well and truly, on his way to making another appearance in the Australian team at Hobie Fishing Worlds 9 (HFW9), after failing to make the cut in this year’s HFW8 on the Gold Coast in July.

Pettie didn’t manage to get up to Mallacoota for the Pre-Fish day on Friday and spent the first few hours on day one working on a plan. He became a little flustered early but calmed himself and set his mind to the task at hand. His first fish came at around 11am and he had his bag by 11:30am and managed an upgrade shortly after that. That was it for the day!

On day two Pettie, who had spent most of the weekend fishing Goodwin Sands, had his bag by 8am, giving him the luxury of almost a full day to upgrade. While day one was fairly comfortable up there, on day two the area was like a carpark with nearly 80% of the field fishing the area. Pettie out manoeuvred them all by just moving on a little further than most and getting himself some clearer water. Where he had most success fishing in a depth of 60 to 120cm throwing Hurricane Fat 37 in Camo Crab hardbodies.

Day two’s bite came on from 7 to 8am, and after that he failed to upgrade in a long and at times frustrating day, at the same time knowing he had three excellent fish in his livewell.

On Friday, during pre-fish Morley had fished Top Lake and found it to be offering not much more than rubbish. With that in mind he decided on comp day one to take on Goodwin Sands, an area he hadn’t fished in a comp before.

He thought, “What the hell! Let’s go there”.

He went on to say, “I had no real plans and just threw Hurricane Fat 37s around and I came up trumps. I only had three bites yesterday (day one) for three fish. The bite window for me was quite sporadic. The first fish came on my second cast, and the next fish came about an hour and a half later, and my third was around 11(am) when the media boat came past. That was it for the whole day.”

“Today (day two) I went back to the same place and Tony (Pettie) was about 100m further down to the east of me and he slayed them and I struggled. I didn’t have a fish until 9 o’clock when I cracked that bigger one that I had in my bag. After that Tony came up and we had a bit of a chat. He showed me what he was throwing, so I put that on and bagged two pretty quickly, so I was pretty happy with that. Then I got an upgrade about 12 o’clock.”

The Atomic Big Bream was caught by Adriano Tosolini (NSW) with a 1.33kg slapper that was bigger than the 1.16kg for 2 fish that he weighed in on day one.

MORTGAGE CORP MONSTER MOVER
The Mortgage Corp Moster Mover prize went to Josh Klimas (Vic) who caught no fish on day one and 2.49kg on day two to finish in 36th place.