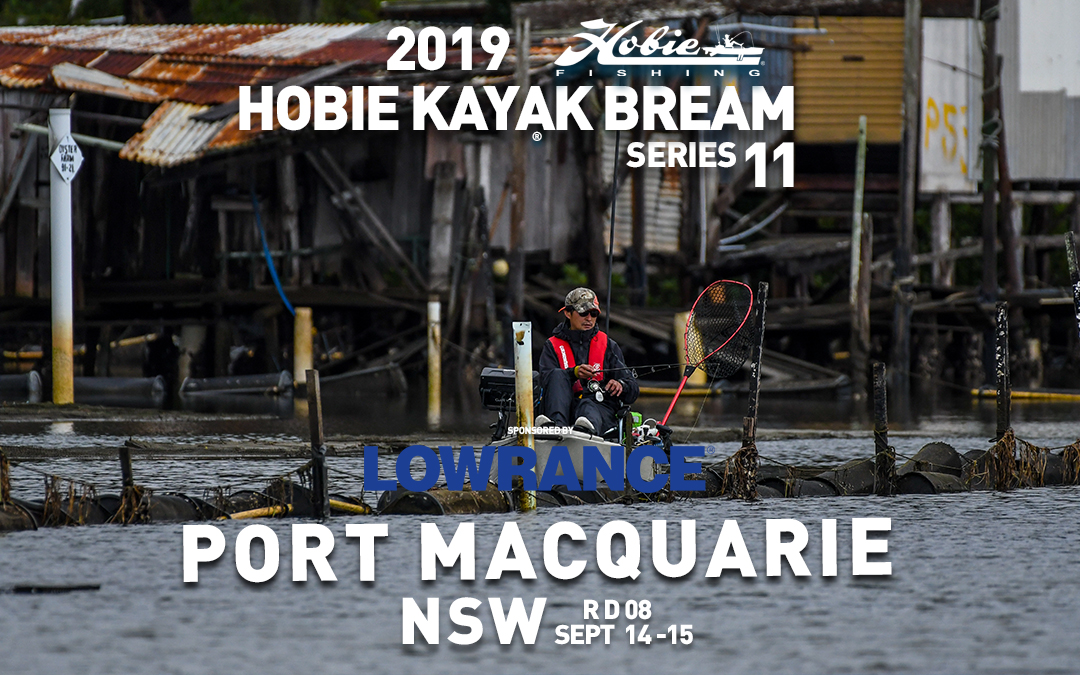 Monday, 2nd September up to and including Thursday 12th September.

If you do not see your name in the Entry List, below, after 24 business hours please email entries@hobiefishing.com.au directly. 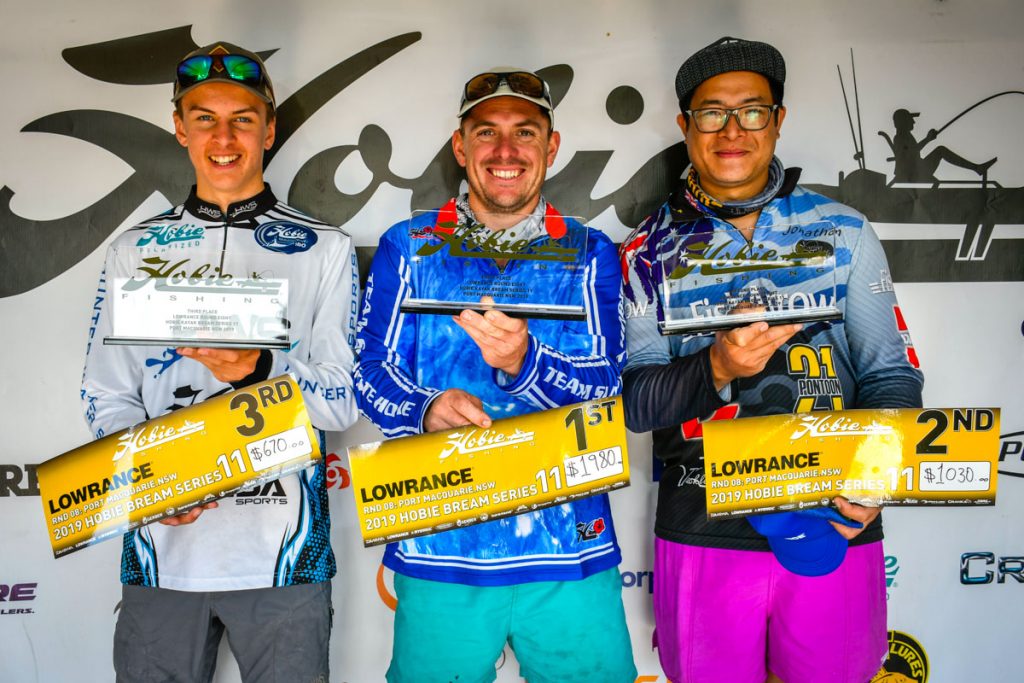 Lowrance Round 8 of Hobie Kayak Bream Series 11 was contested over the weekend at Port Macquarie in New South Wales. The pre-fish ban was lifted on Friday allowing anglers to get out on the Hastings River for the first time in a month, a good number took the opportunity to get out on the water to develop strategies for the weekend.
The system had a lot of variety to offer anglers with oyster leases, rock walls, mangroves, flats and boat hulls, canals and pontoons were all spread throughout the arena.

On Saturday, day one of the tournament, glassy conditions and clear skies greeted the 70 competing anglers who came from Victoria (Vic), New South Wales (NSW), the Australian Capital Territory (ACT) and Queensland (Qld). A 15knot plus SSE breeze would eventually blow across the water building up from around 9:30am.

The field split in half at the start, heading in two distinct directions. One group into the main channel towards the rocks on the sea wall with others heading straight to Limeburners and the oyster racks on the northern side of the channel, and others headed further to the two canal systems. The other large group peeled off to the left from the start and worked their way through moored yachts and on to the mangroves, a bridge and a couple of small man-made coves. A small group, of around five, stayed close to the start and began to immediately fish the barge and the boat hulls right on the starting line.

When the wind did blow up it made conditions very difficult, on a day when the bite was already tough. There were fish about, but to get them to attack a lure was much more of a challenge in their post spawn condition than most anglers were expecting. With the wind gusting up to 19 knots, and a strong outgoing tide working against it, the trip home was wearing on all of the anglers who had travelled into the back of the arena.

At the close of the day Jonathon Chen (ACT) led the field on 2.34kg, in second place was Russell Babekuhl (NSW) on 2.31kg. Third place was held by sixteen-year-old Cullen Di Mattina (NSW) on 2.22kg with Shaun Chapman (NSW) 2.20kg in fourth. He was followed by Steve Crawley (Qld) 2.13kg in fifth place with just 140g separating the next 5 places.

Day two saw similar conditions at the start and the trip back to the event site in the afternoon was a lot easier with the wind moving to the NE, blowing with and not against the outgoing tide. For most competitors the bite was even harder to attract than it had been on day one, but a number of anglers went against the trend, such as Warren Cossell (Qld) and Francis Di Mattina (NSW) who did better on the final day.

Russell Babekhul who had been sitting in second on day one thought that the later runout of the tide was another factor that had made bite a bit tougher, particularly later in the session. Having caught his fourth fish to fill his bag with just 20 minutes to go he summised that another hour with the tide draining out would have been ideal.
The number of fish caught on day two was down on the first day with 104 fish caught weighing 44.54 kg at an average of 428g. In total 221 fish were caught weighing 96.71kg at an average size over the two days on 440g.

The last time a round was contested at Port Macquarie was in 2017, and Queenslander Luke Roger took out the win. And it was once again Luke Rogan (Qld) with 8 fish for 4.75kg who took home the major prize in 2019. Rogan won $1980 for his magnificent effort.

On day one he brought back four fish for 2.05kg and followed it up with the biggest bag of the tournament with four fish for a 2.70kg. On day two Rogan needed to do something out of the ordinary to pull back day one leader Jon Chen, so from the start, when the whole field headed off through the starting line, Rogan chucked a u-turn and headed out of site under the bridge into the small creek that feed the water into the starting area. He returned out of there with one fish an hour or so later.

“I went up there and returned with one fish that was just legal. I saw plenty of big fish up there but I couldn’t catch them, so I just moved on. Then I went back up to where I went yesterday, into these little cul de sack looking areas to the west. One has about 5 pontoons in it and the other one has about ten. And I just went back and forward all day.”

“On about my second trip I bagged out, and then upgraded my small one. Then I just upgraded for the rest of the day, just going back and forth. Actually, it was kind of unbelievable, I probably upgraded four or five times”

With just the day one leader to come Rogan needed 1.87kg to take the lead. His bag was placed on the scales and BANG! It was big, really big 2.70kg with an average of 675kg per fish, his biggest fish weighing in at 910g.

Jon Chen got up on stage, and gestering to Luke Rogan, said “I think he’s got me”.

Chen needed 2.42kg to regain the lead that he had established on day one. The bag went on the scales and it measured up at 2.03kg giving him an excellent second place finish.

“This was my fourth round this year. Hopefully, I’ll do the next round and get more Angler of the Year (AOY) points and be up there for the Worlds. So far, I have got a second here, a third in Woy Woy, a fourth in Sydney and I can’t remember what I got at Bemm (River)”. (Bemm was 26th)

“Today I had a pretty good morning. I was flicking my crabbys with hidden weights into the shady side of pontoons. I got three pretty early and then got a pretty small one and upgraded that twice by about 11:30 (am). At that stage I had about 1.8kg and I was looking for a bit of a kicker to push me over the 2kg mark”.
.
“On day one I fished both canals. I got one in the small canal and the rest in the bigger one. So today (day two) I was weaving in and out of all the canals trying to find the places that haven’t been already hit. There seems to be fish on all the pontoons, but just getting them to bite, or being patient and waiting for them to bite, seemed to be the key. Yesterday, when we got to low tide they really started to bite but today we just missed that opportunity”.

Cullen Di Mattina (NSW) came in third with 8 fish for 3.91kg and won $670. The sixteen-year-old from Paddington in Sydney also caught the biggest fish of Lowrance round over the weekend. Di Mattina took home $100 from Atomic for his “Atomic Big Bream” which weighed 960g and was caught on day one and around 200g bigger than the next biggest fish.

The Mortgage Corp Monster Mover prize went to Paul Dunlop from Newcastle (NSW). The prize is for the angler who makes the greatest leap up the leaderboard from day one to day two. Dunlop had no fish on day one and caught a full bag of 4 bream on day two weighing 1.52kg.

In the Divisions Cullen Di Mattina added to his list of prizes for the weekend taking home a sponsor prize pack for the Youth Division. Ruth Beeby won the Women’s Division and Mark Knight won the Master’s.