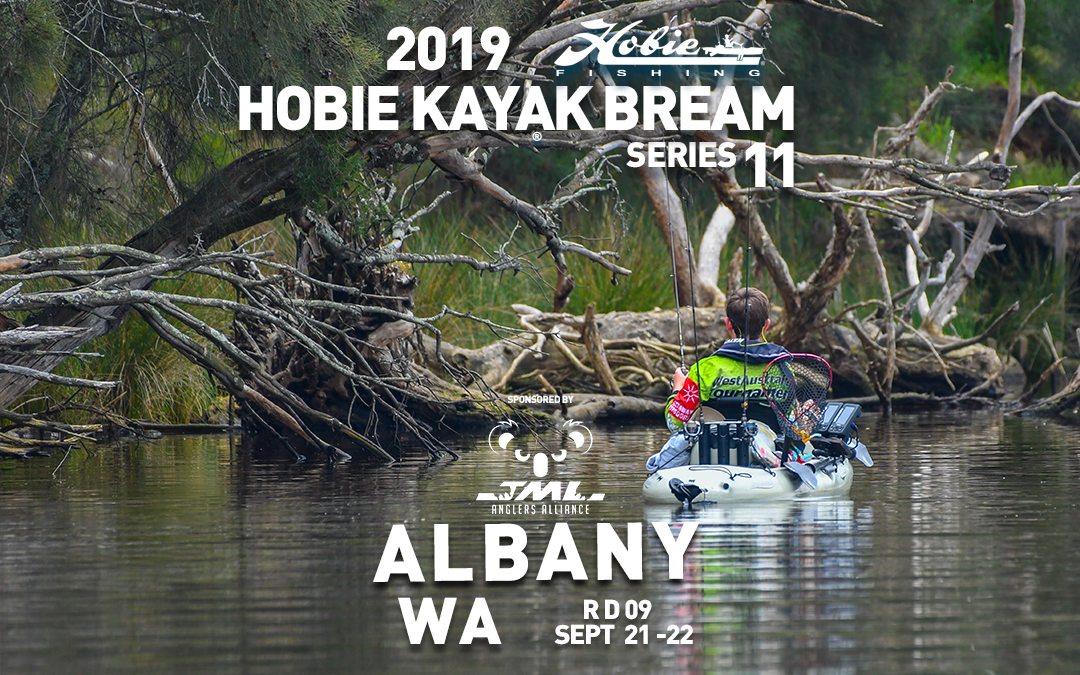 JML Round 9 of the Hobie Kayak Bream Series 11 took place in the beautiful southern WA town of Albany which is home to the King and Kalgan rivers that flow into the Oyster Harbor Estuary. On Friday, the day before the event began, the anglers were allowed to pre fish these pristine waterways so they could muster up a game plan for the weekend in order to take out the honours and qualify for the Australian Championship.

Albany’s rivers and estuary system is dominated by sandflats but as you head further up both the Kalgan and King rivers, you’ll notice that snags and rock walls begin to take over the rivers landscapes. The estuary however has oyster racks, a few marinas and plenty of ribbon weed beds that are home to plenty of black bream.
The key for the anglers was not so much about finding fish due to the abundance of fish in this waterway but more so about finding the right size. Something that proved difficult for most of the field that consisted of two South Australian anglers, two Victorian anglers and thirty West Australian anglers. Yet there was a group of anglers that rose to the task at hand and excelled with flying colours.

The conditions on day one were almost perfect for bream fishing. Overcast skies, a south east breeze ranging from 5-10 knots and scattered showers were favourable conditions to fish for black bream but a dropping tide for the entire session (7am-2pm) didn’t create the sort of bite that Albany is renowned for. Plenty of fish were still caught although the bigger bream just weren’t willing to play the game. The anglers spread out to all different regions of the waterway and plenty of them managed to find big bream but the challenge from there onwards was keeping these fish on the hook. Albany black bream have soft mouths so plenty of fish managed to shake their way off the hook which resulted in some tales of woe back at the weigh in. However, a number of anglers managed to avoid this dilemma on the first day to bring back some decent size fish to the scales in order to set themselves up for the second day.

The total number of bream caught on day one came to 81 totalling a bag weight of 36.69 kg’s resulting in the average weight of the bream coming in at 452 grams.

Day two was much the same conditions as day one except for the wind and showers. Overcast skies and glassy conditions were present for most of the day. The gloomy conditions first thing in the morning created a productive bite for most of the field enabling them to fill their bags quickly. Although once the sun rose and the day dragged on, the fish began to shut down and became very challenging to catch. This wasn’t the case for all the anglers and the leading anglers after day one proved that they had an effective game plan to keep them in touch with the fish for the entirety of the second day. This ability to draw bites throughout the day was the difference between featuring on the podium or finding yourself back in the pack.

STEVEN FLIES AWAY WITH THE WIN!

Steven Pryke made the long journey from his home state of Victoria to put his skills to the test against a field of anglers that mostly comprised of West Australians that were very familiar with the Albany waterway. That in itself was a substantial handicap from the start but proving to everyone that he is a skilful enough angler to override this challenge, Steven led both days of the tournament to claim victory! Pardon the pun but it was a coast to coast style of win!

The move to head upriver on the Kalgan River both days of the tournament was clearly the right call. Steven Pryke worked together with a few anglers that also made the long journey from the eastern states and they methodically formulated a plan amongst each other for the two days. Steven and his eastern states mates headed upriver past a set of shallow lying rock bars commonly referred to as the rapids by the locals. Everyone caught fish but it was Steven that made the most of the opportunity that the upper region of the Kalgan River presented to the group of the anglers. Steven threw 2.5” grub styled soft plastics rigged on 1/24th of an once and 1/12th of an ounce jig heads depending on the depth he was fishing. Steven targeted the deep banks in this region and also laydown timber that scatters the edges of the river banks. This tactic resulted in Steve catching approximately thirty legal size bream each day which increased his chances of finding the bigger fish that he needed to win the event. Yet the victory didn’t come easily for Steve despite his ultra-consistent performance for the weekend. On day two the time was beginning to tick away and he was in need of some upgrades desperately. As he slowly fished his way back to the event site he came across a timber lay down that would change his fortunes. In three casts he showed why he deserved the win by upgrading his entire bag with some very solid black bream. So in the end, the game plan held strong for Steve and after leading day one by a mere 30 grams with a bag weight of 1.89 kg’s, his strong performance on day two saw his lead climb to a comfortable 330 grams after weighing in a 2.04 kg bag for him to claim victory in the ninth round of the Hobie Kayak Bream Series 11.

West Australian angler, Greg Cooper has done it before and nearly did it again with a day two charge that would’ve been a very good comeback if he managed to snatch the win. Despite this, his second day performance was still good enough to see him rocket from 13th place after day one to 2nd place on day two. It was reminiscent of his Blackwood River Hobie Qualifier round performance in 2015 when he brought back 2.7 kg’s to come from nowhere and snatch the title. Either way he proved that the Grand Master division angler is always a threat to win from almost any position after day one.

Greg Cooper went against the grain to most anglers who did well in the event and decided to fish downriver of the Kalgan River for both days of the event. He targeted predominantly shallow sand flats and threw OSP Bent Minnows across the flats to extract the fish. Greg Cooper mentioned that he had some adjustments to his game plan after day one because his initial tactics just weren’t doing the trick. A fairly modest bag of 1.30 kg’s had him languishing in 13th place and his adjustments for day two were going to need to turn things around drastically if he was going to have any hope of making a comeback. The experience and persistence paid off and Greg enjoyed a fantastic second day to produce the biggest bag for the two days of fishing and almost complete another impressive comeback. Greg quickly bagged out in the morning and had most of his eventual bag weight stitched up by 9 am when unfortunately, one of his fish died. It wasn’t good timing either as the bite slowed down drastically and it took a prayer to the man upstairs to turn near disaster into elation. Two casts later and Greg caught the bream he was desperately after! This fish allowed him to weigh in a 2.30 kg bag on day two in order to give himself a chance to win. It was close but no cigar as they say. Yet I think it’s fair to say Greg Cooper was mighty chuffed with his efforts either way.

Rounding out the podium was Travis Newland who finished in third place with a two-day combined bag weight of 3.54 kg’s. He caught his fish on Razor Edge Bruce soft plastics which he worked along rock walls and sand flat drop offs.

Tim Stylianou caught the Atomic Big Bream for the event which weighed in at 1.34 kg’s. He caught this fish on a shallow crankbait worked over a shallow sandflat. This fish earnt him a handy $100.

The Mortgage Corp Monster Mover for the event was taken out by Rene Van Doorn who failed to weigh in a fish on day one but shot up the leader board with a full bag on day two that weighed 1.23 kg’s.

In the divisions Michelle Pardini won the Women’s Division and Greg Cooper took out the Grand Masters Division. Both of these anglers took home a prize pack full of sponsor provided products.

Which brings us to the event sponsors who are nothing short of brilliant. Therefor we would like to thank Daiwa, Lowrance, PowerPole, Gerber, ProLures, Cranka Lure, Tackle Tactics, Atomic, Lure Fans, Strike Pro, Mortgage Corp, Hobie Polarized and JML.