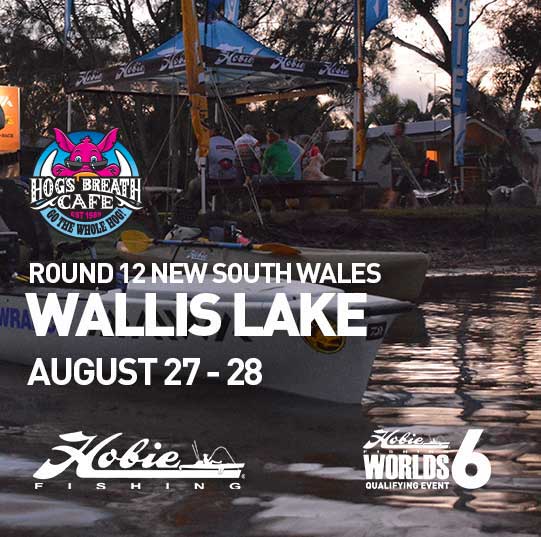 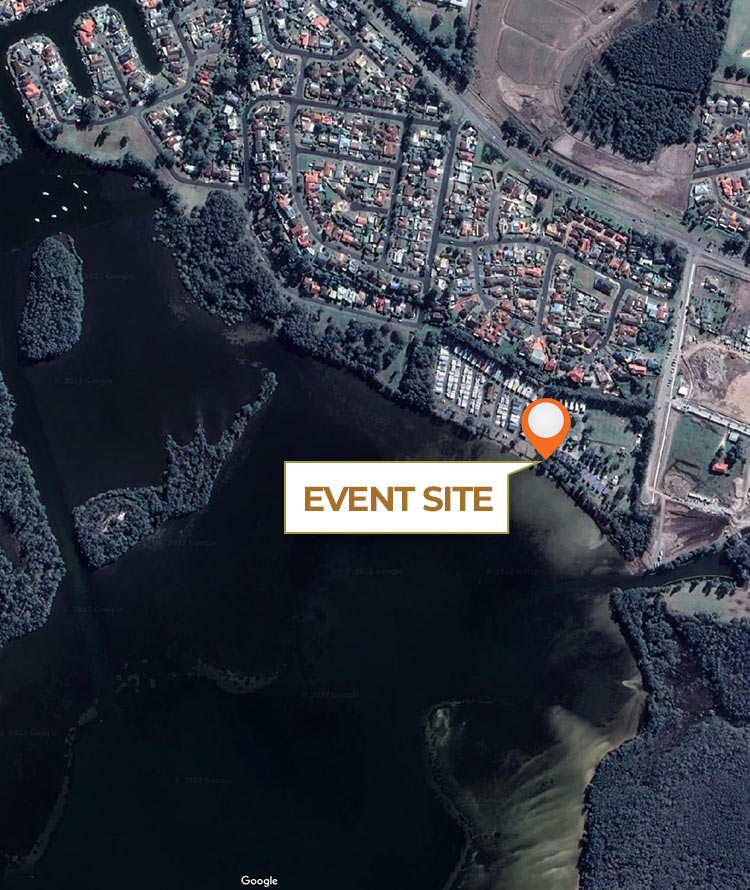 Day One Weigh In

Somerton cleans up at Wallis Lake! 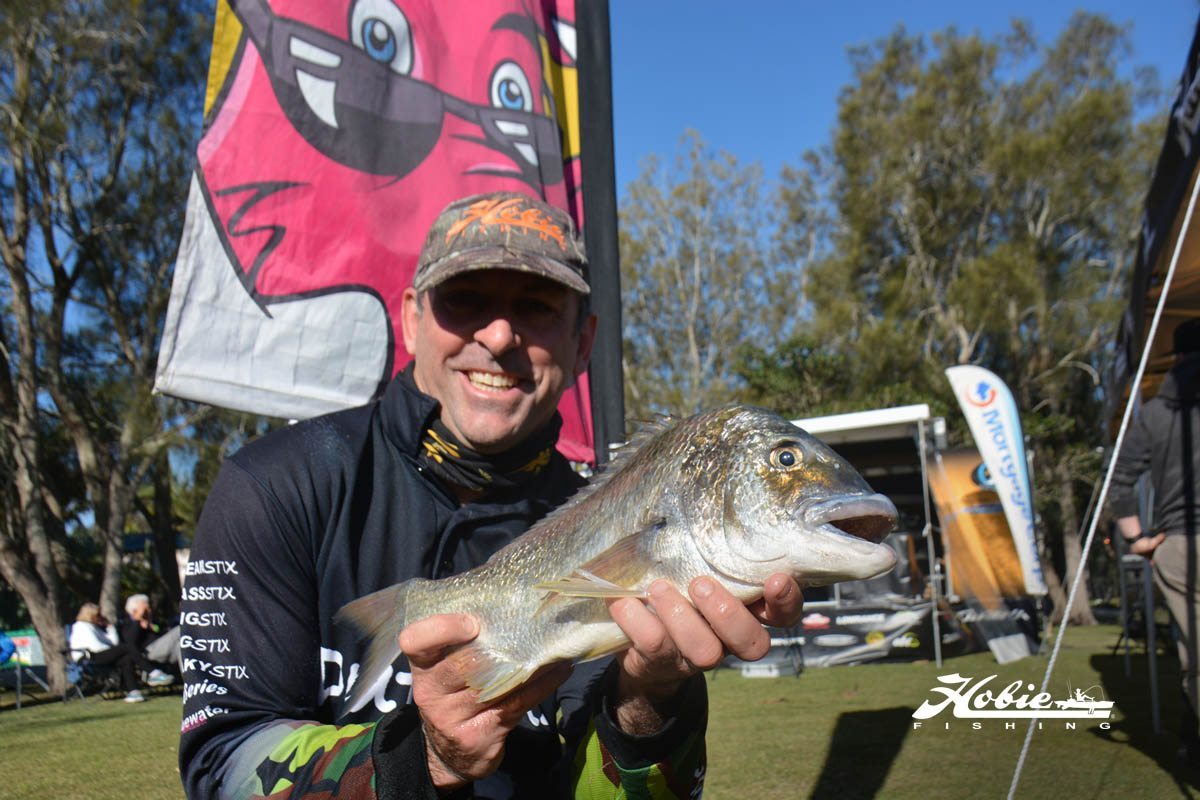 96 anglers from New South Wales, Queensland, the ACT, Victoria and as far afield as Western Australia, all descended on the seaside town of Forster in New South Wales to compete in the Hog’s Breath Cafe round of the 2016 Hobie Kayak Bream Series presented by Daiwa.

All were competing for a seat at the 2016 Australian Hobie Fishing Championship to be held on the Gold Coast in late October. This was also the chance for those waging a campaign for a spot on the 2016, Australian, Hobie Fishing Worlds team to build their qualifying score.

The Wallis Lake arena was the perfect spot to do just that! The arena is a favorite on the Hobie Calendar, due to the quality and diversity of fishing the system delivers. There were plenty of options on offer over the weekend, from the edge fishing along Pipers Bay, Yahoo Island and Garden Island, the weedy flats directly in front of the launch site, to the adrenalin filled, highs, and lows of racks fishing found throughout the arena. The system did not disappoint!

The weekend started with wet, cold and windy conditions coming from the South, South West stirring up the water and bringing on an epic afternoon of fishing on Saturday resulting in a total of 41 full bags of 4 bream and a total of 225 Yellow Fin Bream for the day.

Day two, in contrast, delivered considerably calmer conditions with high sun and very little wind making for a more comfortable, albeit tougher, second day on the water and 165 Bream to the scales at weigh in.

At the close of competition, 81 of 96 anglers had presented a total 390 Yellow Fin Bream to the tournament director, weighing in excess of 180kg over the course of the weekend.

Ultimately, It was Richard Somerton from Victoria who claimed the top spot and took home the monster cash prize of $2,730.00 as well as a generous sponsors prize pack for his trouble.

Somerton’s impressive two-day total of 8 Bream for 6.6kg were pulled from the racks, near Tuncurry, about 8km pedal from the Atomic Lures, launch site and were enough to secure him the victory with a comfortable 1.29kg lead over second place getter Kris Hickson (NSW) with 8 / 5.11kg and Carl Dubois (NSW) in third with 8 / 4.67kg.

Somerton put the work in with the 16 kilometre round trip snatching the bulk of his fish from the cover some particularly shag covered racks, which not only provided shelter for the fish but also a plentiful food supply. The decision paid dividends as the racks not only delivered his bags but also landed him another $100.00 for the Hog’s Breath Cafe, Boss Hog Big Bream Award for his 1.41kg Horse!

“ When I got the big one, I had the crab under the racks and he went sideways with it and when he came out, I saw how big he was and he just buried me! I had the whole rod underneath the yak. I don’t know how I landed him on size 14 hooks and 10lb leader. The Cranka Crab really worked for me, he had the two sets of trebles on either side of his mouth and that’s the only reason I held on to him.”

“Fishing the racks, there was one set of racks that had shags all over it which just burley in the water. Plenty of cover, plenty of food, plenty of fish!” 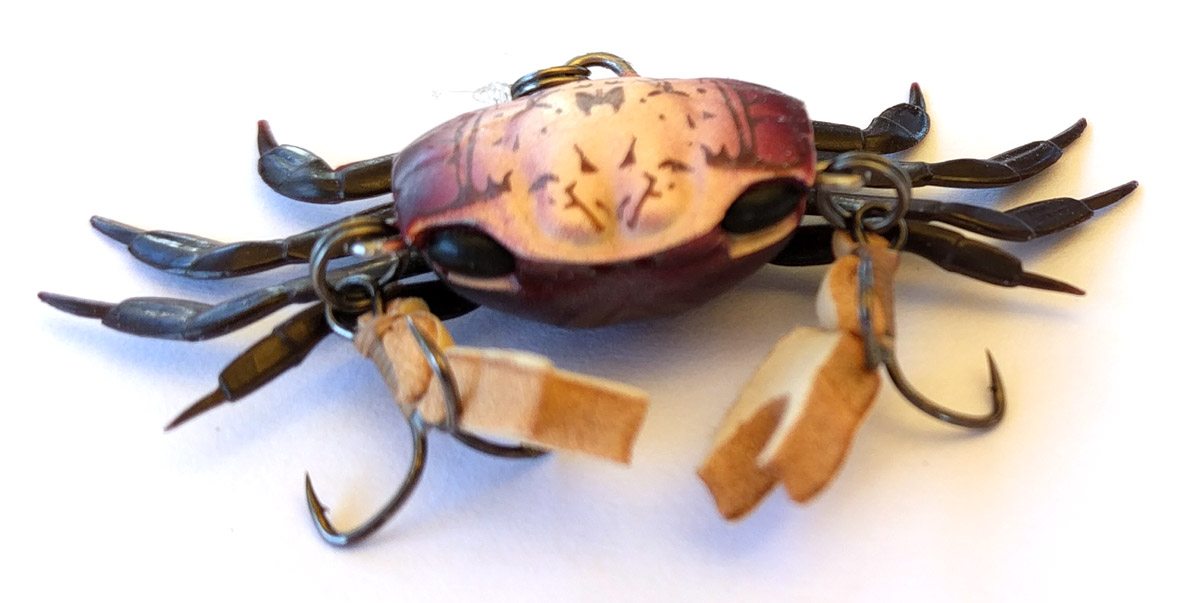 Hickson grabs second and a place at the Hobie Bream Australian Championship.

Kris Hickson from New South Wales has landed himself a seat at the Hobie Bream Australian Championship on the Gold Coast with his second place bag of 8 bream for 5.11kg.

Hickson, who won the 2014 Wallis Lake round used his prior knowledge, Google Earth, and sixmaps to map out a plan of attack for the weekend with the intention of ‘spot hopping’ a lap around Wallis Island, however after getting his bag early on Saturday morning decided to continue fishing where the fish were and save his legs.

With the high sun on day two, he headed to the racks about an hour from the launch site but had to put the work in to find some of his own water as there were a lot of anglers with same idea on day two.

“My game plan across both days was pitching unweighted Ecogear Aqua Soft Plastic on a sample pack of Daiwa Saq Sas, Teflon coated, super sticky, worm hooks which worked really well on day one but the bite changed a bit on Sunday, so between that and the good old 2.5” Bloodworm ZMan GrubZ covered in Pro-Cure just pitching them as close as possible to the racks and hoping you could get them out worked really well.”

The division titles went to Tracey Wright in the women’s with 2 for 1.53kg. Brian Rutledge took the Grand Masters with 7 for 2.82kg, Jim Halliday claimed the masters with 7 for 1.33kg and Steven Pryke picked up the Youth category with 3 for 2.01.

The Mortgage Corp Monster Mover goes to Scott for Slattery who moved up 38 places on day two to finish 33rd.

Round 13, the penultimate round for 2016, sees the Hobie Fishing Road Show head to Nelson, on the South Australian / Victorian Border for the Ecogear round of the series before heading back to Queensland for the final round of the year at Bribie Island.

Like all of the events in the Hobie Kayak Fishing Series, this round could not have gone ahead without the great support of our generous sponsors Daiwa, Berkley, Atomic, Lowrance, Rhino-Rack, Strike Pro, TT Lures, Yamatoyo, Ecogear, Power-Pole, Hog’s Breath Café, Mortgage Corp, ABT and also to the team at Barclay Marine for providing dealer support for the tournament.

Thanks especially to the 96 anglers in attendance for making this the largest New South Wales round since the series started in 2009.

Richard Somerton from Victoria currently leads a field of 96 anglers in what has been an exceptional day of fishing on the Wallis Lake Arena in the seaside town of Forster, New South Wales.

Anglers were greeted with wet and windy conditions coming from the South South West this morning which eased throughout the day to become an epic afternoon for fishing on the Hog’s Breath Cafe Arena.

Of the 96 anglers that blasted off the Power-Pole Start Line this morning, 74 anglers caught fish and 44 caught their limit of 4 bream. In total 225 bream were caught, weighing 104.85kg before being released back into the system.

Stay tuned tomorrow for all the action from Day 2 of the Hog’s Breath Cafe Round of the Hobie Kayak Bream Series.