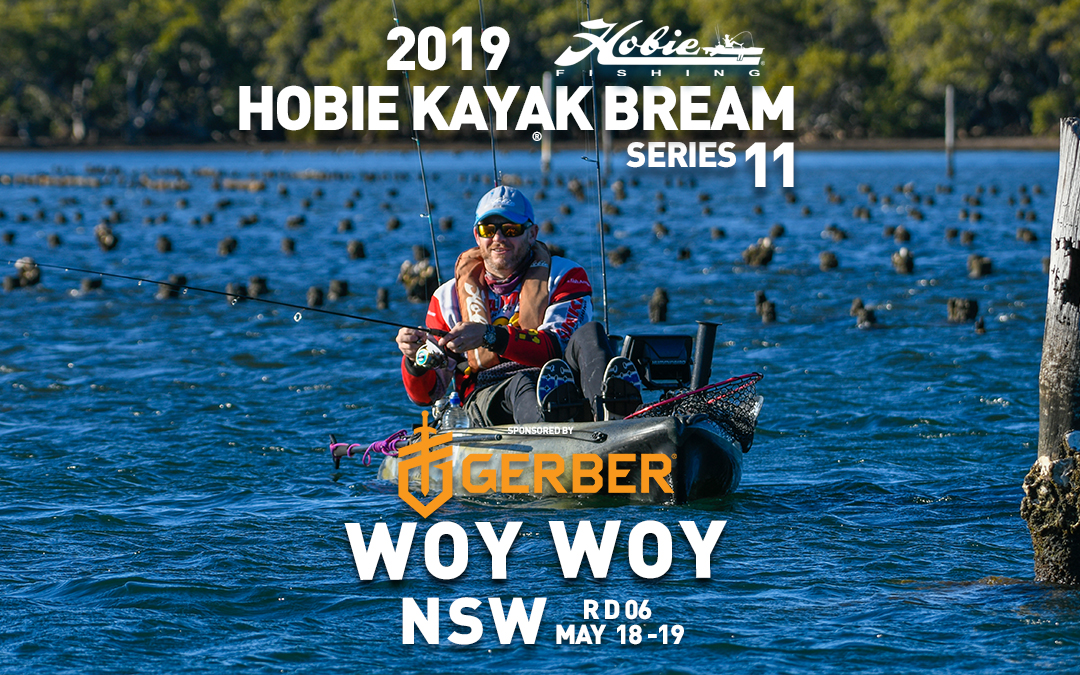 This event is now sold out.

Due to council permit limitations and community concerns, we kindly ask you consider your impact upon the wider community when participating in this round. Please keep noise/music to a minimum and use parking lights (not full headlights) in the mornings.

Your cooperation with the above requests will see Hobie Kayak competitions welcomed again into the Woy Woy area well into the future.

This event is now sold out.

Monday, 6th May up to and including Thursday 16th May.

The arena on Brisbane Waters once again proved to be an excellent fishery coming into the winter season. Competitors were chasing Yellowfin Bream with a minimum length of 26cm to the tip and there was a three fish bag limit on each of the two days of the tournament.

On Day one a total of 174 legal bream were brought to the scales weighing in at 104.34kg. The anglers who pulled the biggest bags on the day were: In fifth place Simon Morley (NSW) on 2.31kg; fourth on 2.44kg was Mitchell Maddison (NSW); in third place was Simon McGuire (ACT) on 2.64kg; Phillip Leaver (NSW) 2.66kg was in second; and Kris Hickson (NSW) led the field with a corker of a bag weighing 3.36kg.

HAPPY HICKSON
Taking home $2590 for a weekend of fishing, who wouldn’t be happy? A happy Hickson summed up his weekend.

“Winning this one is a bit of a surprise. Having come into this round without doing a pre-fish”.

Hickson’s day two bag wasn’t as good as day one but when 2.69kg clocked up on the scales, and he took the lead from Carl Dubois, he was pretty, stoked with the situation. He had built his bag up gradually, throughout the day, slogging his way through tough patches where there was nothing about.

“I just chipped away at them today. I’d go through periods where there was no bite at all and then I’d get two or three bites in a row and if I got them, I’d get something pretty good. It was just so unpredictable this weekend, I’d get bit (sic) in places where I’d never caught fish before, or not for a long time, and the ‘gimmes’ (places he’d expect to catch fish) were not producing at all”.

“I fished mainly racks but I kind of got them anywhere and everywhere. One of my biggest ones yesterday, was actually off a weed flat, up in Kincumber Bay. Another fish in my bag was off a mangrove this morning, under an overhang with shags on it. I was concentrating on poles and racks and walls, but the fish I got were kind of everywhere”.

“I pretty much fished the same pattern and went to the same places over both days. All plastic was pretty much the go for me. I’d use the 2 1/2” Zman Grub when I was fishing a bit quicker and moving through the structure. If it looked like a likely place, and I wanted something slow and smelly to float down I’d throw a Crabby, and if there was a bird there, I’d throw an Aqua. But I think the key to my success was fishing bits and pieces of structure that may have been overlooked by other anglers”.

“On day one I decided to head north towards Frederick Point. There were already half a dozen kayakers around it when I got there, and it was pretty, quiet, so I ducked into the shoreline and picked up one quickly around the edges, on a hand-painted lure by Glenn Allen”.

“I had no other joy there, so I headed out into the deep at around 5 metres. I wasn’t having a lot of luck until I finally figured out, they were after longer, slimmer profile soft plastics and I changed lures and then I started to get a few. In the end my day 1 bag went 2.19kg which had me sitting in 10th spot”.

“On day 2 and I went straight back to my deep-water spot. By 9am I had my bag and a 1.12kg kicker. Then it went quiet until about 12:30pm when I started to land a few more but with no upgrades. Just after 1pm I hooked something good and prayed it wasn’t a Jewfish which had been about. Thankfully it was another kegger and that was it for the day. This gave me a bag of 2.66kg and it was enough to push me up into 2nd place”.

“The fish that came out of here were unbelievable, I just hope we come back up here again next year”.

ATOMIC BIG BREAM
The Atomic Big Bream prize was taken out by Simon McGuire (NSW) with a cracker 1.47kg bream.

DIVISIONS
Youth Division went to Cullen Di Mattina (NSW) on 3.84kg, the Women’s Division was taken out by Ruth Beeby (Vic) with .85kg, the Masters went to Gary Hanson (Vic) on 1.98kg and the best First Timer was Paul Bonham (NSW) with five fish for 2.06kg.