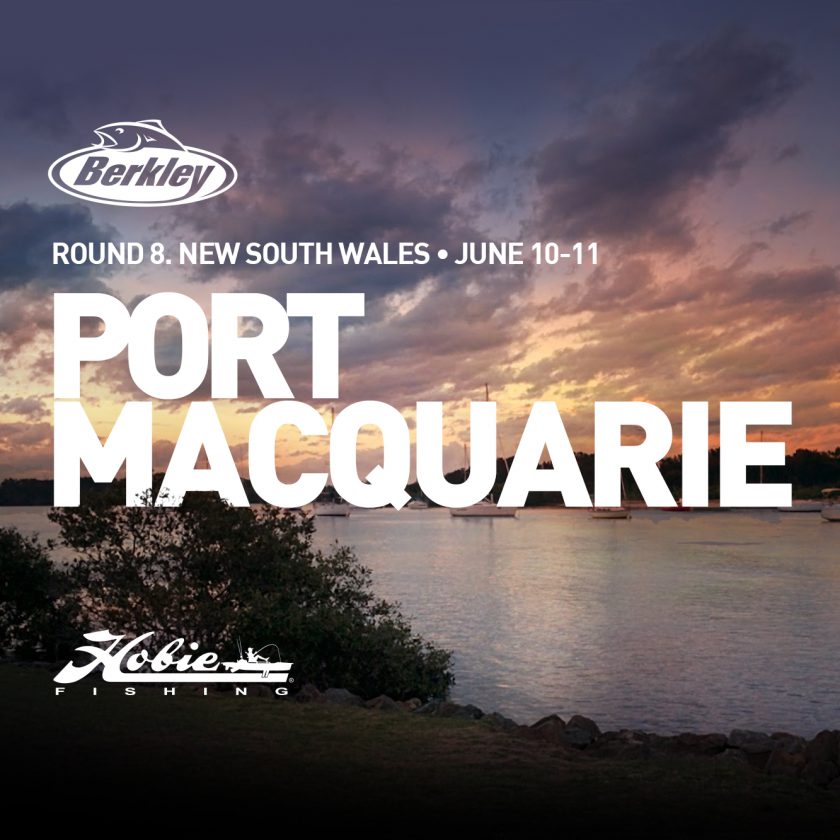 Monday 29th May up to and including Thursday 8th June. 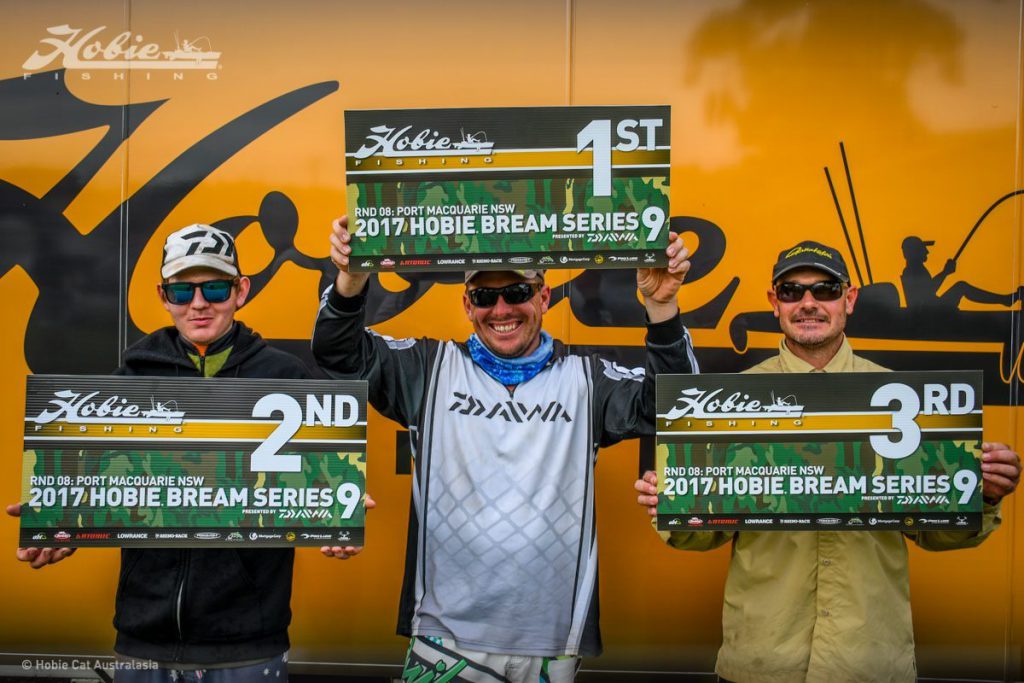 Berkley round 8 of Hobie® Kayak Bream Series 9 took place at Port Macquarie, on the New South Wales mid north coast on 10 -11 June. 47 anglers from Queensland (Qld), the Australian Capital Territory (ACT), Victoria (VIC) and New South Wales (NSW) headed to one of the series’ favourite locations to compete on the Hastings River system.

On both days anglers headed off from the Power Pole starting line in Kooloonbung Creek, which is situated close to the mouth of “the Hastings”. The forecast was for the heavy showers, that had rained down consistently through pre-fish, to continue into the two days of competition. However, the rain eased on both mornings of the tournament and anglers started under very heavy, low cloud, but fortunately, no rain.

As the morning progressed on day one, it became very wet, with an icy breeze and the air temperature well below predictions. The water temperature sat around 20 degrees Celsius, and while it was uncomfortable for anglers, the conditions were ideal for a good bite. Sunday looked ominous with heavy rain falling as anglers prepared for the day, but midway through the 6:30am briefing the rain eased and after a few scattered, morning showers the weather broke and patches of blue began to appear in the sky around 11:15am. There remained a reasonably widespread cloud cover, but the wind fell away, and the bite became slightly tougher to entice than it had been on day one.

Both days had fantastic starts, with all anglers getting off the line cleanly. Fifteen to twenty kayaks headed up the left channel towards the moorings, marina and an alternative course to the punt that crosses the main channel. The rest of the field headed out into the main channel of the Hastings, some stopped to hit the rock wall that lines the north-eastern side of the river mouth. The majority who headed in that direction used the stronger flow, of the incoming tide, to assist them in the 20 to 30minute pedal up stream to Lineburners Creek and the back lake, with their oyster racks, poles and paddocks. Just a few competitors headed into the small canal system lined with rock walls, wharfs, floating pontoons and boat hulls, in the end this proved to be a wise choice.

The pre-fish reports of plentiful fish and a good bite were confirmed with an early bite on both days, that saw many anglers bagging out, with four fish, before 9am. Sunday was a little tougher than day one, but a high percentage of anglers brought home full, or near full bags, on both days.

After the day one weigh-in Queenslander Luke Rogan was heading the field. Sitting very close to Rogan in second place was another Queenslander, Tyson Hayes, and in third place was Glenn Allen from New South Wales, and well within striking distance of the top two.

Luke Rogan made his long trip, travelling down from Queensland, worthwhile, with a convincing win in Berkley round 8 of Series 9. Rogan finished with a day one bag of 2.89kg that took him to the lead of the field. He followed that up with 2.87kg on day two, giving him a two, day bag total of 8 fish for 5.76kg. He took home an excellent sponsor prize pack and a cash payout of $1440 for his efforts. He also gained a place in the Australian Championship in Western Australia and accumulated 100 Angler of the Year (AOY) points.

Rogan gave us a brief rundown of his weekend in Port Macquarie.

“On Saturday, I headed up to the canals. I would fish and then move really, quickly, hitting pontoons along the way through the first canal system. I got some good fish and I saw a lot of other good fish as I moved about. So, with the bag that I had, which I thought was pretty good, I decided to leave the fish there alone, so I could come back to them on day two”.

“On Sunday, I headed straight back up to the canals (with my fingers crossed all the way) hoping the fish were still where I left them. When I got into the canals, the fish were there and they were biting. I was crank baiting the pontoons with ZipBaits and I was throwing crabs around the poles”.

TYSON SEES THROUGH THE HAZE

Tyson Hayes also travelled down from Queensland and finished in second place, 340 grams behind the winner. Hayes finished with a day one bag of 2.88kg. He held onto that place at the end of the tournament with 2.54kg on day two, giving him a two, day bag total of 8 fish for 5.42kg. Hayes won a major sponsor prize pack, a cash payout of $860 and gained himself a place in the Australian Championship in Western Australia as well as accumulating 99 AOY points.

Hayes briefed us on how he attacked the Hastings River bream.

“This was my first round for the season and it turned out to be a good two days, it was well worth coming down for”.

“On day one I started up river in the canals, from there I went further up fishing floating racks, I was fishing them with unweighted plastics, Zman Slim Swimz in multiple colours, the bloodworm and the pumpkin seed. I had 2.88kg on Saturday and I was pretty, happy with that. On the second day, I knew there would still be fish out there. I went up an extra 1k (kilometre) and that paid off for me, I got 2.5kg into my livewell. I was fishing with the same stuff as I used on day one, the same unweighted plastics under floating racks, but just further up the system. I also got some of them on ZipBaits and throwing Cranka Crabs at the poles”.

Third place went to Glenn Allen from the central coast in New South Wales who, like the top two, held on to his day one position. Allen pulled in 2.77kg on day one and 2.03kg on day two giving him a tournament total of 8 fish for 4.80kg. He bagged a valuable sponsor pack, $510 and 98 AOY points, which has taken him up to 4th place on the AOY leader board for the series, so far, this year.

Paul Hardiman from the ACT won the Atomic Big Bream prize, for the biggest fish of the round. He pulled his 960g bream by delicately crawling a black Pro Lure crank, over the top of oyster covered rocks and “Hoping like heck” he could pull it out. 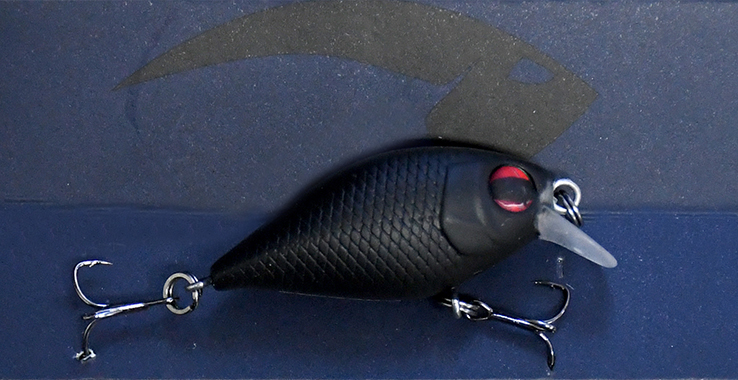 Youth Division
Jack Gammie from NSW was the top performing youth with a day one bag of 4 fish for 1.56kg, on day two he brought back a 4-fish bag weighing 1.60kg giving him a two, day total of 3.16kg. Gammie finished in 14th place overall.

Women’s Division
The winning woman was Michelle Carmody from New South Wales, with a day one bag of 2 fish for 0.65kg and a day two bag of 2 for 0.70kg, giving her a two, day total of 1.35kg. Carmody finished in 35th position in the Open Division.

Master’s Division
Lex Court from Davistown in New South Wales was the best performing Master with a day one bag of 4 fish for 2.14kg and a day two bag of 2 for 0.77kg, giving him a tournament total of 2.91kg. Court finished in 9th position overall.

PA 17T Tandem Division
The sponsor prize pack winners in the division were Cullen and Francis DiMattina from NSW with a day one bag of 4 fish for 1.73kg, on day two they brought back 4 fish for 1.64kg, giving them a two, day total of 3.37kg.

Paul Dunlop won the Mortgage Corp Power Pack, jumping from zero fish on day one to bag 1.45kg on day two and finish in 34th position on the Rhino-Rack leader board.

At Port Macquarie, a new prize was introduced, the “Berkley Bonus Round”. A name was drawn from the list of competing anglers who did not feature in the top ten. If that angler was present at the weigh-in, they receive a “Free Entry Coupon”, allowing them to fish any one of the remaining rounds, free of charge. The first to receive the “Berkley Bonus Round” was Trent Rogers from NSW. Well done to Berkley and congratulations Trent!

See you all at Strike Pro round 9 on the Gold Coast in Queensland on July 22-23.

Thank you to Hunter Water Sports, located in the Newcastle suburb of Belmont, for their dealer support and for the pizzas, garlic bread and drinks on both Saturday and Sunday.

Early this morning 47 anglers headed off from the Power Pole starting line on Kooloonbung Creek, close to the mouth of the Hastings River, in Port Macquarie, New South Wales for Berkley round 8 of Hobie® Kayak Bream Series 9 which is presented by Daiwa.

Anglers from Queensland (Qld), Victoria (VIC), the Australian Capital Territory(ACT) and New South Wales (NSW), were chasing a 4 fish bag of bream and were competing for qualifying places in the Australian Championship, lucrative cash payouts, impressive sponsor prize packs, Angler of the Year (AOY) points, and to build their tally of points in the hope of qualifying for the Australian Team to compete at Hobie Fishing Worlds 7 in Europe next year.

Yesterday’s pre-fish day was similar to pre fish conditions in round 7 on St Georges Basin, with wind and consistent rain, which became torrential at times. Despite the uncomfortable conditions reports were positive, with fish on the bite, and widespread across the arena.

When day one of competition commenced at 7am this morning the skies were filled with a low, heavy cloud cover and a breeze drifted across the water, signalling perfect conditions for fishing. The temperature kept much lower than the predicted high of 19 degrees Celsius and patchy rain fell throughout the morning.

Reports of an early bite were widespread and fish were plentiful, just as the pre fish angles had predicted. A large proportion of competitors filled bags early, and while upgrades were quite common, they were usually only small additions to exiting bags.

Paul Hardiman from the Australian Capital Territory leads the Atomic Big Bream for the round with a fish weighing in at .96kg.

With a day of the tournament to go, the current leader of the round is Queenslander Luke Rogan with 2.89kg. Sitting in second place is another Queenslander Tyson Hayes on 2.88kg and in third place is Glenn Allen from New South Wales with a solid four fish bag of 2.77kg. Tomorrow anglers will, once again, be chasing a maximum bag size of 4 fish.

Anglers register at 6:00am for a 6:30am briefing and a 7am start. Weigh-in will be at 2:30pm (AEST). There will be a live stream broadcast of the weigh-in and presentation, on hobiefishing.com.au, with a simultaneous live feed to on Hobie Fishing Australasia Facebook page.