Monday, 15th April up to and including Thursday 25th April. 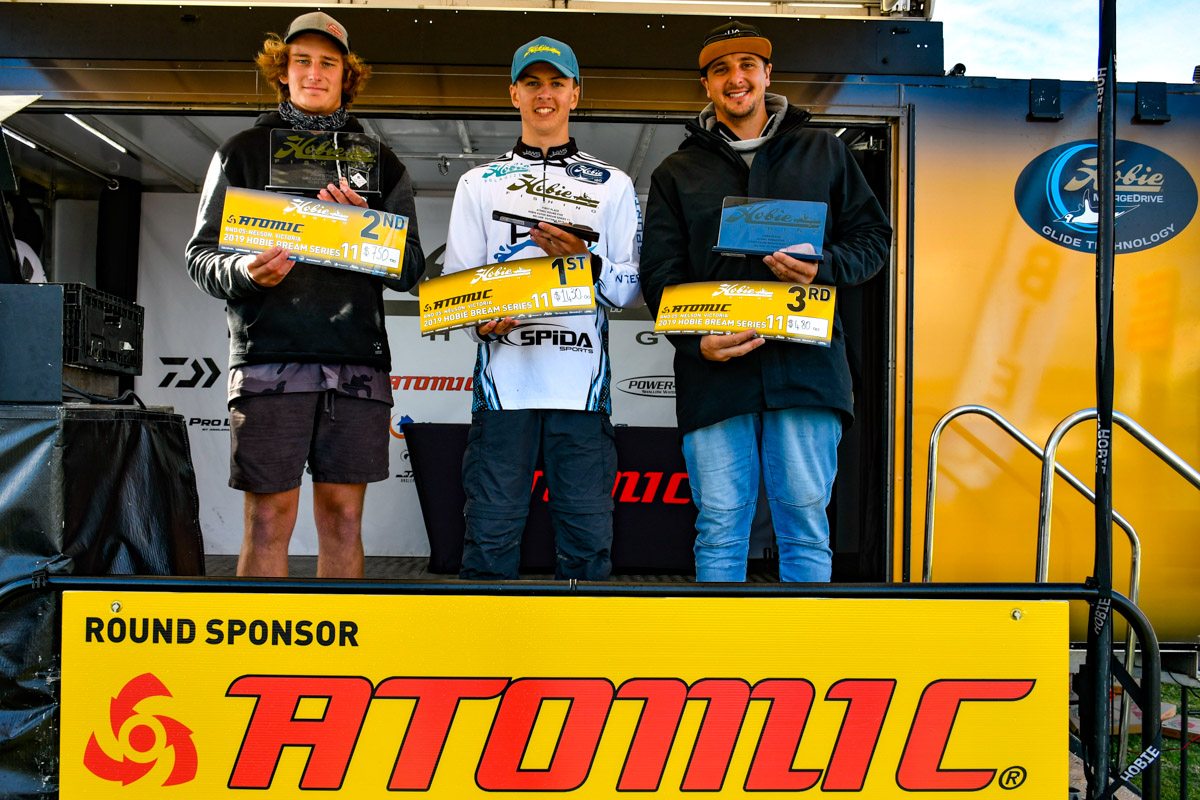 FINAL REPORT
Atomic Round 5 of Hobie Kayak Bream Series 11 was held over the April 27-28 weekend on the Glenelg River, bordering the states of Victoria (Vic) and South Australia (SA).

51 anglers competed in the event with the majority coming from Victoria and South Australia, with a sizeable crew travelling from New South Wales (NSW) and one keen Queenslander (Qld) making the long journey south.

Anglers were chasing a bag of three bream on each of the two days of competition, with the minimum size allowable being one centimetre above the state legal limit of 28cm.

Cloudy conditions persisted over the two days of the event, and on day one with westerly winds ranging up to 17kts, 82 fish were caught with a total accumulated weight of 48.95kg. On day two in a breeze tending more to the south, and down to around 13kts towards the end of the session, 68 fish were brought the scales for 39.87kg. The two-day total of 150 bream weighed 88.82kg, with an average individual weight of 590g

Youth and Open Division competitor, Cullen Di Mattina (NSW) finished the event with 3 fish for 2.10kg on day one, and 2.43kg on day two. He ended on top of the leader board with a six fish total weight of 4.53kg and $1430 for his effort. Second place went to another youth under 21years of age, Kobi Rothall (SA) with 1.99kg and 2.13kg, giving him a 6 fish two-day total of 4.12kg and a prize purse of $750. The “old man” who rounded out the top three places of the tournament and pocket $480, was two-time Australia representative Mitch King (Vic) with 6 fish for 4.08kg.

YOUNG GUN SHOOT OUT
New South Wales high school student Cullen di Mattina has taken out his second win in a Hobie tournament after winning the Glenelg River river over the weekend. He had his first win last season taking out the Hopkins round in his first ever Hobie event in the Open Division at the age of 16. Di Mattina has finished with consistently high finishes, since that first win, and has established himself as the new “Young Gun” of the series, today knocking off another youth Kobie Rothall (Vic) in his first tournament.

Speaking to tournament director on stage at the presentation on Sunday Di Mattina said,
“Today I cracked a pattern that I had worked in pre-fish, but yesterday (day one) was a bit tough. Today I fished for maybe the first hour and a half at the front (of the system), but I got nothing there. I had got some there on pre-fish but because there were heaps of kayaks there today, I decided to head up to Donovan’s and fish banks.”

“I was looking for the undercut banks that had trees overhanging and that’s where the fish seemed to be hanging. I was skip casting on to them. I would let the lures sit for 20 to 30 seconds before I would start to twitch them.”

KOBI TWO IN HOBIE ONE
Restricted to second by Di Mattina, Kobi Rothall (SA) finished in a creditable second place in his first Hobie tournament, and in doing so established himself as another young angler who could go a long way in future Hobie series.

Standing on stage and receiving his trophy and a $750 prize purse Rothall said,
“When I saw the event was on, and living just 20 minutes down the road, I thought, ‘why not? I might as well give this a bit of a go’ and here I am”.

“On day one I stayed up the front (of the river) for most of the day just drifting the bank just behind the hill. I found a pattern late on the Squidgy Bio Tough in UV Bloodworm, just popping it out of the weed and I got three quick ones and an upgrade.”

“On day two I got two fish by 7:15 (am), and that was on the Squidgies. Then I went up (river) and grounded it out, and that was where I got an 850 grammer (sic) on a crab, just in front of Mods (Aaron Williams) which actually made it even better. And then I lost two bigger fish on the way back.”

Rothall’s response when told that he had qualified for Australian Championship, to be held early next year, was simply, “Stoked with that!”

Hopefully, we get the opportunity to see these two exciting young anglers go head to head more often in this and future Hobie series.

ATOMIC BIG BREAM
The Atomic Big Bream was caught on day one by Tony Pettie from Traralgon (Vic). The biggest fish of the tournament weighed in at 1.13kg, just under double the average weight of the 150 fish caught over the two days of the event.

MORTGAGE CORP MONSTER MOVER
The winner of the Mortgage Corp Monster Mover prize was Kevin Beams (Vic) who finished with zero fish on day one and 1.81 kg on day two he moved from the bottom of the field up into equal 24th place.