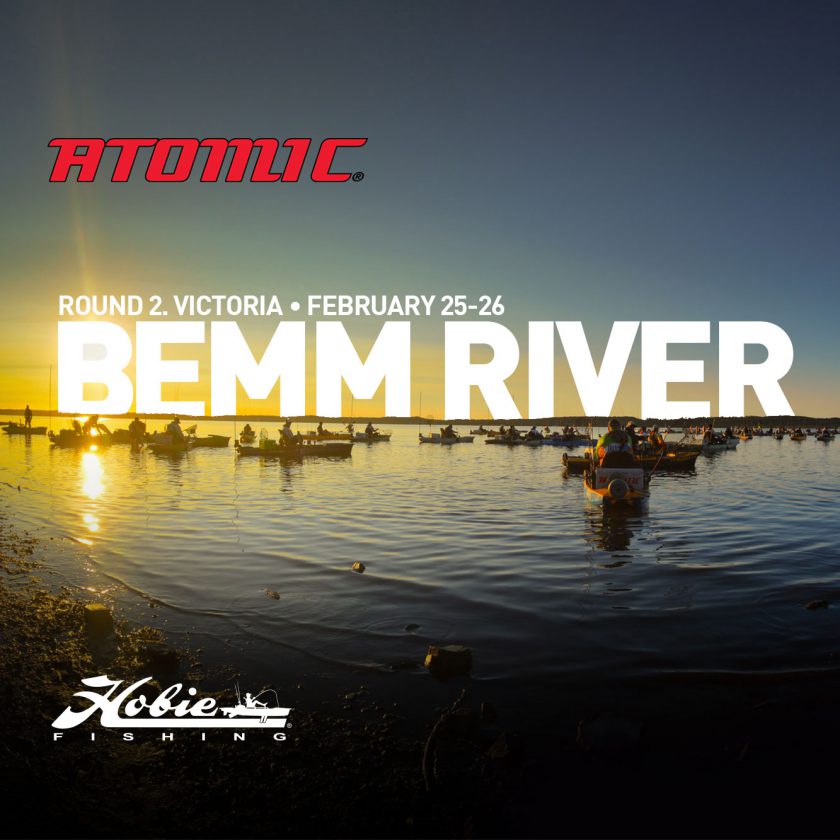 Monday 13th February up to and including Thursday 23rd February.

Crossing of the bar at Sydenham Inlet.

Day 2 Registration time will be announced at briefing.

Day 2 Briefing time will be announced at briefing.

Day 2 Session time will be announced at briefing.

94 anglers competed in Atomic round two of Hobie® Kayak Bream Series 9, at iconic Bemm River in Victoria over the February 25-26 weekend.

Bemm River was closed off at the mouth causing the water level in the inlet to be substantially higher than it has been in past series, allowing easy access to areas, such as Mud Lake and the nearly always inaccessible Swan Lake. The “Big Blacks” were abundant across the system and full bags were a common occurrence. On day one 67 anglers brought back to the Atomic Launch Site full bags of 3 fish, with 86 anglers bringing back legal bream to the weigh-in. The field was led by Tony Pettie with 3 fish at 3.36kg, followed by Joel Crosbie with 3 fish at 2.95kg and Jayden Dihood with 3 fish weighing 2.82kg.

Anglers were greeted with fair weather at the Power-Pole Starting Line on day two and most reports from across the Pro Lure Arena, were that the bite was as good, or better than day one. After a tough weekend of fishing in the series opener at Marlo, anglers were extremely happy competing at a location where fish were abundant and interested in presentations across the waterway.  Day two saw 63 full bags brought back to the Strike Pro Weigh-in, with 165 fish weighing 143.5kg.

Pettie Powers to the Top

On day one Tony Pettie had an excellent day on the water and came back to shore with what turned out to be the leading bag of fish, and the biggest single bag caught during the event, with 3 fish for 3.26 kg. He was also holding the biggest fish of the day, weighing in at 1.16kg, and in the lead for the Atomic Big Bream cash prize which is awarded at the close of day two.

Pettie gave us a brief outline of how he managed to bring home some huge fish and two great bags to win Atomic round two of the series.

“On day one I fished down near Mud Lake on the shallow flats down there. I was using a 50 Twitch in crystal prawn, and I got three fish pretty quickly and I thought, ‘Well that’s not too bad’ so I decided to go and look for some spots for day two.”

The bag gave Pettie a lead of 310g over day one second place finisher, Joel Crosbie with three fish for 2.95kg.

Pettie continued, “On day two the wind changed direction and that made it really hard on the flat that I wanted to fish because there was no wind on it.  I stuck at it for about an hour and a half without much luck and then decided, because the water was clear, I would go to deeper water. I started blading with Hurricane vibes, a nitro axe and a camo crab, and I slowly started picking up fish, turning them over and ending up with the final bag that won me the tournament.”

Pettie ended up with 6 fish for 5.52kg and a winning lead over Clark Wilson from Victoria of 350g. He took home a sponsor prize pack valued at over $400 and a cash prize payout of $2680. After two rounds completed in the series and with a first place, at Bemm River, and a second place at Marlo, Pettie is currently leading the Angler of the Year (AOY) point score for 2017. 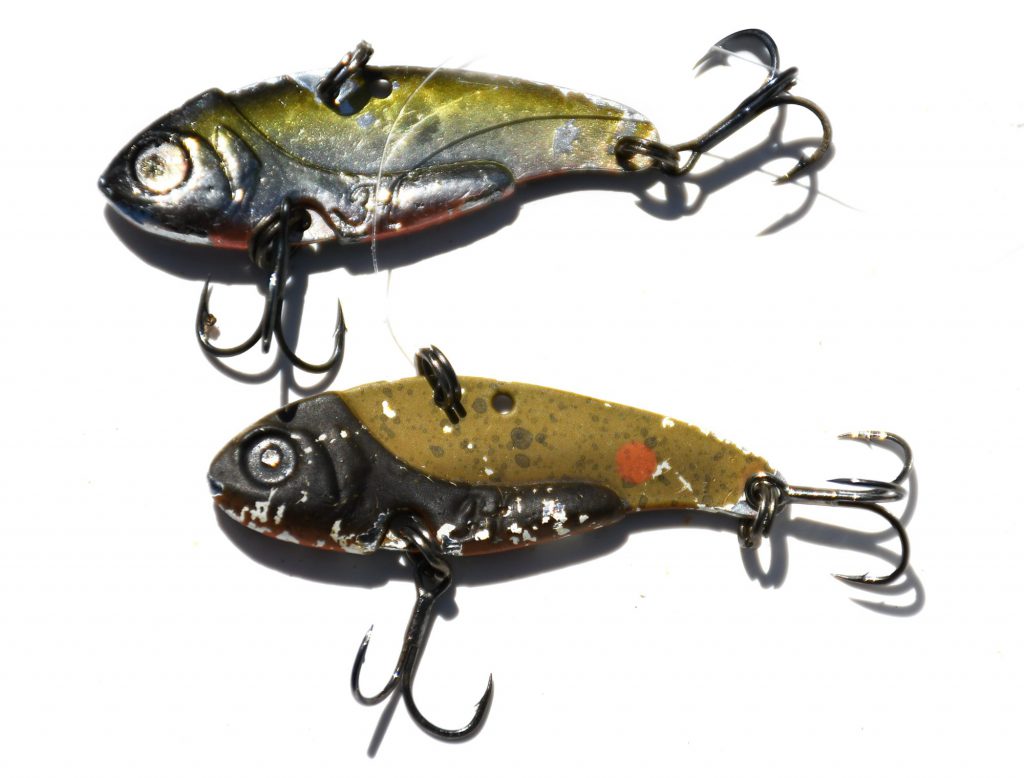 On day one Clark Wilson from Victoria, came back to the Strike Pro weigh-in with a 2.7kg bag that had him sitting in a comfortable fourth place overall at the close of the day.

Wilson gave us a brief outline of how his tournament progressed.

“On Saturday I started off around the corner (from the starting line) on Bob’s Bay and fished 3 to 4’ of water with soft plastics and had a bag by, probably 7:20am. I then moved out into deeper water and threw soft plastics and blades all day, and just kept upgrading at probably 100 grams at a time, and ended up with 2.7kg.”

“Then on day two I did the same thing at the start, I went into Bob’s in the morning. It took me a little longer (than day one) to get a bag, probably an hour to an hour and a half.  Then I did the same thing again, as I did on day one, I went out and battled the wind and fished blades in 6 to 8’ of water and I just kept getting fish all day.”

Wilson brought home a 2.47kg bag with a weekend total of 6 fish for 5.17kg, big enough to take out the second place, cash payout of $1390 and a sponsor prize pack valued at over $350. Day one second placed angler Joel Crosbie’s day two bag of 1.94kg gave him a two day, total of 4.89kg and dropped him back to fourth with Paul Malov, who had been sitting back in seventh place, jumping ahead of Crosbie by a mere 50g to take the final spot on the podium.

The overall 41st placed finisher, Ben Thompson from Victoria, won the Atomic Big Bream $100 prize purse for the largest bream caught over the two days of Atomic round 2. Ben’s fish was hauled aboard his Hobie kayak at the river mouth and weighed a solid 1.24kg. 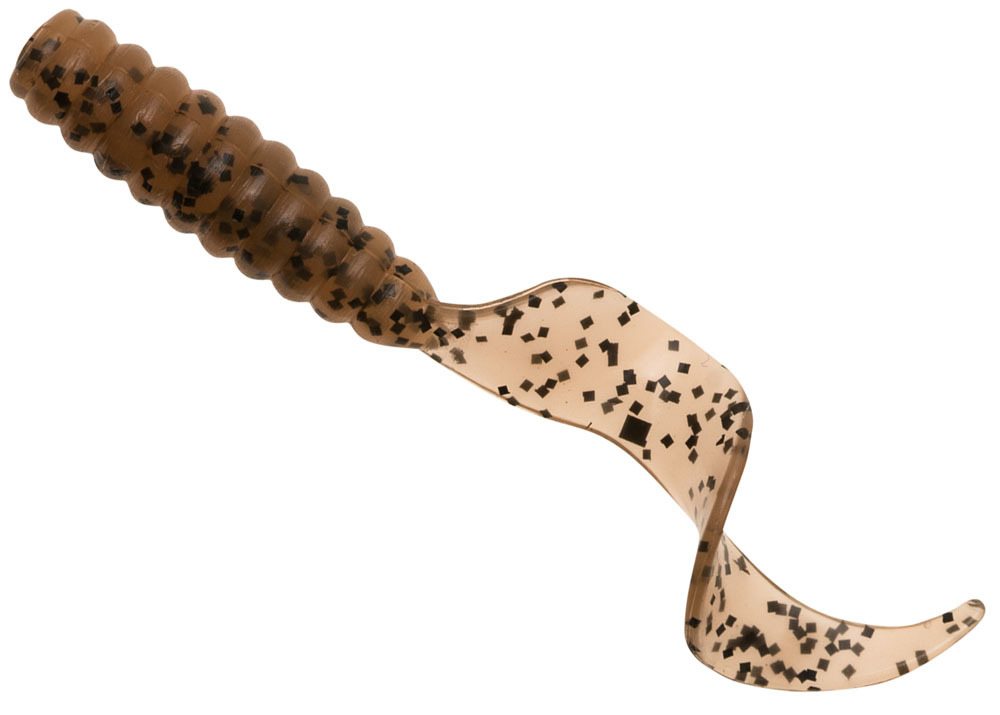 The Mortgage Corp Monster Mover, picnic hamper and backpack, went to Paul Hardiman from Victoria who moved up from no fish and equal 87th place on the Rhino-Rack Leaderboard, at the close of day one, finishing in 68th with a 3 fish bag of 2.52kg.

Coming Up in March

On March 25-26, Hobie Kayak Bream Series 9 returns to Mallacoota in Victoria, for Mortgage Corp round two. Everyone loves the magic of Mallacoota, it’s going to be massive!

The 2017 Atomic round of Hobie Kayak Bream Series 9 could not have gone ahead without the generous sponsors who are supporting Hobie Fishing to present the premier kayak fishing series in Australia, Daiwa Australia, Berkley, Atomic, Lowrance, Rhino-Rack, Strike Pro, TT Lures, JML Anglers Alliance, Power-Pole, Mortgage Corp,Pro Lure, Hobie Polarized and ABT.

Thank you to all anglers for your interest, participation and support of Hobie Kayak Bream Series 9, because in the end these tournaments are all about you. See you all at Mallacoota.

A total of 86 anglers, from an impressive field of 94 competitors, came back to shore with fish, at the completion of day one of the Atomic round two of Hobie Bream Series 9 presented by Daiwa. The tournament is being held at the iconic bream fishery of Bemm River, in East Gippsland, Victoria and has attracted anglers from Victoria, New South Wales, South Australia, Queensland and the Australian Capital Territory.

The entrance to the Sydenham Inlet, the outflow for Bemm River is currently closed and there is a back up of non-tidal water, which has made the inlet unusually deep. The closure hasn’t affected the quality of fishing, which was has remained good across the system with a total of 67 anglers catching their full bag of three legal fish, with many upgrading to bigger fish throughout the day. An excellent total of 228 fish were brought back to the live weigh-in, weighing a total of 155.54kg. All of that massive catch, were released live, to freely swim away back into the local marine environment.

Day One leader is Victorian Tony Pettie with a 3 fish bag weighing in at 3.26kg. Holding second place is Joel Crosbie from Victoria with 3 bream for 2.95kg and also from Victoria in third place is Jayden Dihood from Victoria with a 3 fish bag of 2.82kg. Tony Pettie, who bagged the biggest bream of the day weighing 1.16kg is currently leading the Atomic Big Bream for the round. The Womens Division is headed by Michelle Carmody with 3 for 1.94kg, the Youth Division is headed by Jayden Dihood with 3 for 2.82 and the Masters Division is led by Lex Forbes with 2 for 1.55kg.

Conditions should remain reasonably stable tomorrow and anglers will register at 6:00am for a 6:30am briefing, when the tournament director will announce the start and finishing times for the day. Around 4pm tomorrow we will know the winner of Atomic round 2 of this amazing national Hobie fishing series, which has been running since 2009.