Congratulations to Kris Hickson from Camden Haven, in New South Wales (NSW), on winning the Hobie Kayak Bream Series 11 Australian Championship. The championship was contested on St Georges Basin, on the NSW south coast, from January 29th to February 2nd, 2020. At the last moment the tournament had to be relocated, from Bemm River in Victoria, due to a devastating fire season in Australia which made the trip to “Bemm” impossible.

After winning the Australian Kayak Angler of the Year in Series 10, Hickson was only able to compete in two of the qualifying tournaments in 2019. However, as always when it counts, Kris followed up a top ten finish in the world championships, his previous kayak tournament a few months earlier, to win his first Australian Championship. His previous, best finish in the Australian Championship had been a second to Richard Somerton, on the Gold Coast in 2016.

49 anglers from across Australia competed in the championship after qualifying through rounds in Hobie Kayak Bream Series 11 which was contested throughout Australia. At the completion of the tournament Kris Hickson was the new Australian Champion, Glenn Allen from the NSW Central Coast was second, and Carl Dubois from Sydney, NSW, was third. 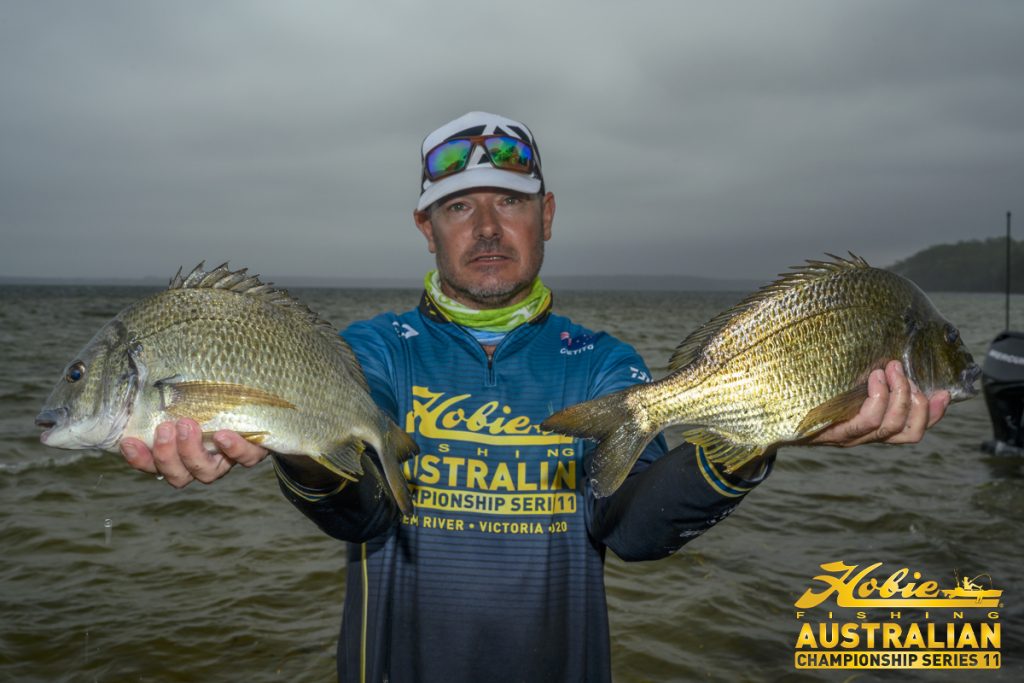 A consistent number of fish were caught over each of the three days of competitive fishing. On day one 111 bream were brought back to the scales weighing in at 63.0kg. Day two saw 115 fish brought back, in the Hobie XL Livewells on board all Hobie Pro Angler 14 kayaks, weighing a total of 66.85kg.

Day three saw 116 fish brought to the scales weighing 66.85kg. A total of 342 bream were brought to the weighmaster with an aggregate weight of 195.61kg. All fished were released to swim back into the lake with the average size of the 342 fish rounding out at 570g. 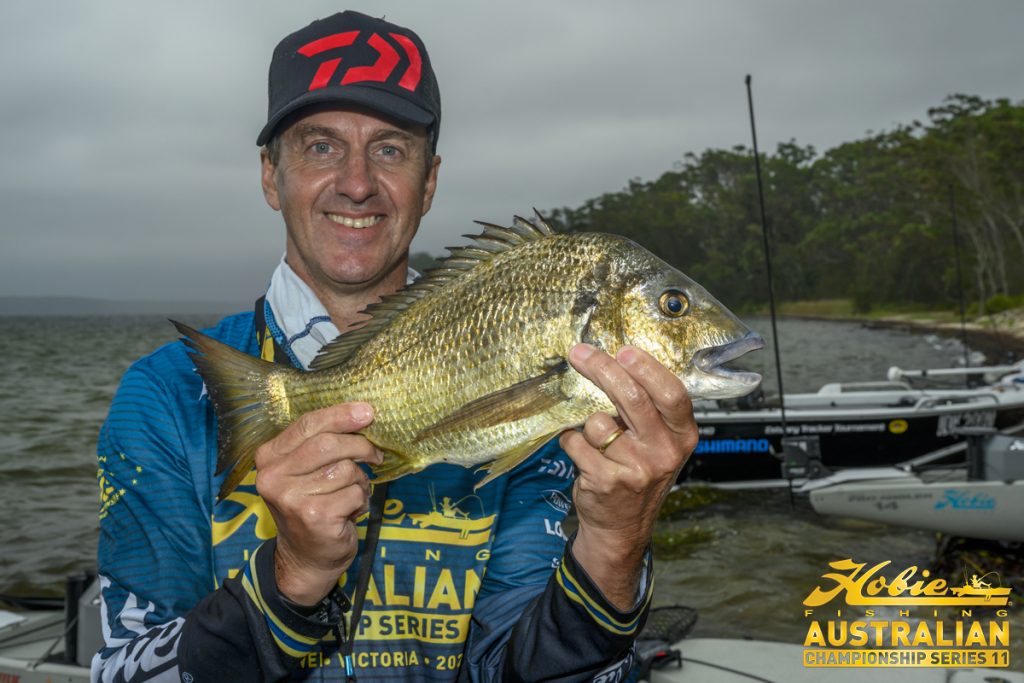 Kris Hickson finished with an exceptional three-day bag, moving around and fishing different area of the lake over the three days, he finished off the last few hours on the final day of the tournament, fishing in an area on where no one else had been. Ironically Glenn Allen had fished the same location during pre-fish and knew there were big fish there but found more in other locations and chose to leave the spot to Kris.

For Kris the tournament pretty much come down to his very last cast. He had been working some flats all day and hadn’t pulled much off it. He was contemplating how long it was going to take him to get back to the event site (40 minutes) when he threw a cast which was taken by, what turned out to be, his second biggest fish of the day. Unknown to Kris at the time the fish, which was a 400g upgrade, would turn out to be the clincher that would bag him the title, he eventually won by 360g. 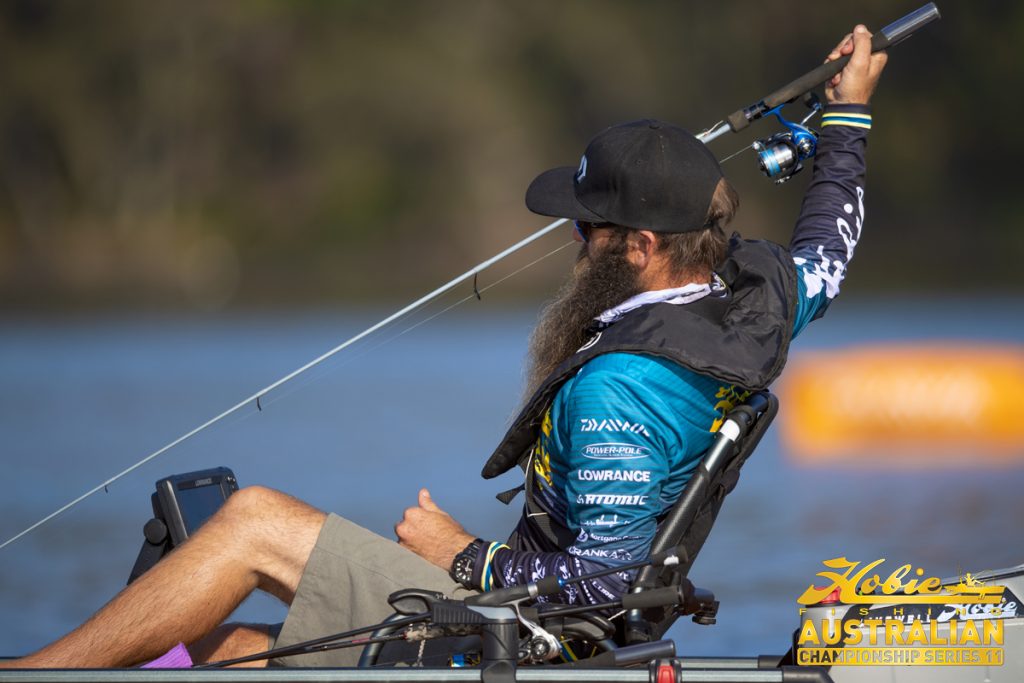 During pre-fish Kris had been looking around for backup locations to his preferred spots, in case the waterway was to glass out, the wind didn’t come through or the edges started to fail. He found some deep holes that he planned to fall back to, and tactically, he stayed away from the areas where he was planning to fish if the conditions were good.

On day one of the championship when Kris went to an area on the western side of the lake where he normally likes to fish (the bay just past Kangaroo Point) the weed was gone, the baitfish were gone, and he knew that something wasn’t right there. There were some fish but not in the numbers that he needed to support him for the weekend, so he “switched it up” and moved on. It was now all about covering ground, then slow down to work a spot, if there was nothing there, he’d hit the MirageDrive pedals and move on. He fished some deep spots while making his way north where he worked areas in numerous bays before again moving on. At the close of the day one session Kris had covered a lot of water and eventually finished with 2.08kg, sitting in a comfortable third place. 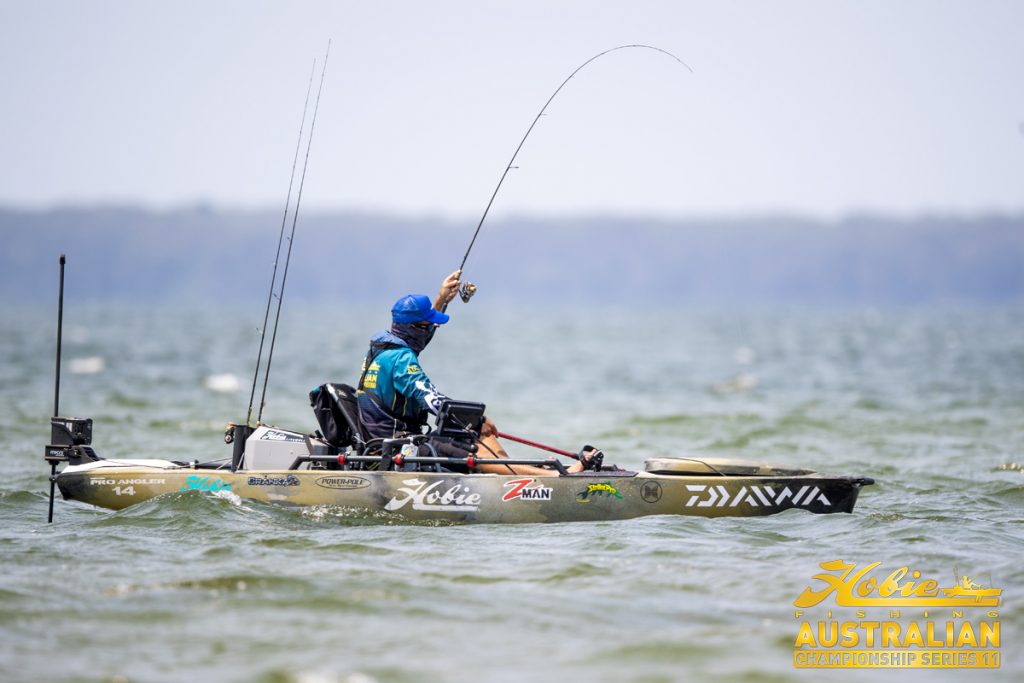 On days two and three he headed south east towards Sussex inlet. On day two it was too windy and too weedy, and he couldn’t fish the area how he likes, so he moved on. “I just let the fish tell me what to do and that’s pretty much what I did”. At one-point Kris had been fishing a deep weed bed. He had a feeling there were bream there because there were plenty of bait fish about, with tailor hanging around, and it looked just right. Nevertheless, he just couldn’t get anything down deep. He decided to change things up a bit and threw a topwater across the bed and that seemed to stir things up.

He got a couple of rises out of the weed from the topwater cast, but no commitment. He thought this may have stirred the fish up a bit, so he threw a crank back down deep across the bed and it worked. What it needed though was a very small crankbait with tiny hooks. 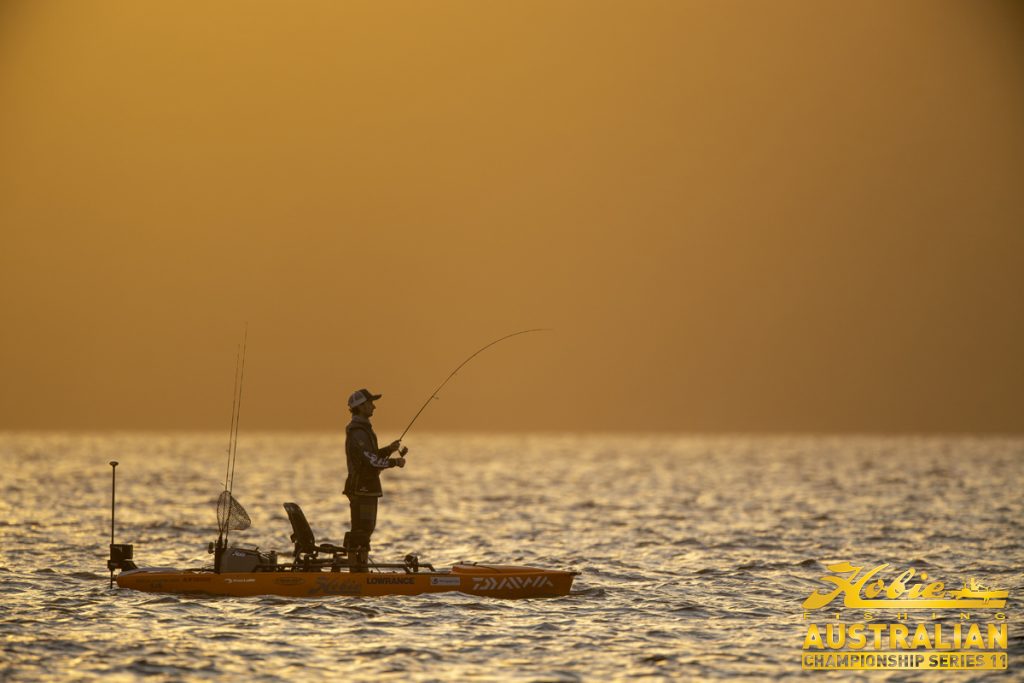 Kris used an arsenal of seven rods over the championship but predominately went for Daiwa 7’ to 7’6” rods because he can get more distance with his casts. He likes to throw as long a cast as possible over the flats, his thinking being that in that situation, the longer a cast he throws, the more chance he has of catching fish.

The main rod he used for crank baits was a Daiwa Infeet 722ULRS which he considers the perfect rod for long casts over weed beds, with its slow taper, it’s nice and spongy feel, and Hickson feels it’s perfect for those tiny hooks that he was using. He theory is that if the fish come out and have a play with the lure, they don’t feel the rod, aren’t spooked, and are more likely to come back and have another crack. 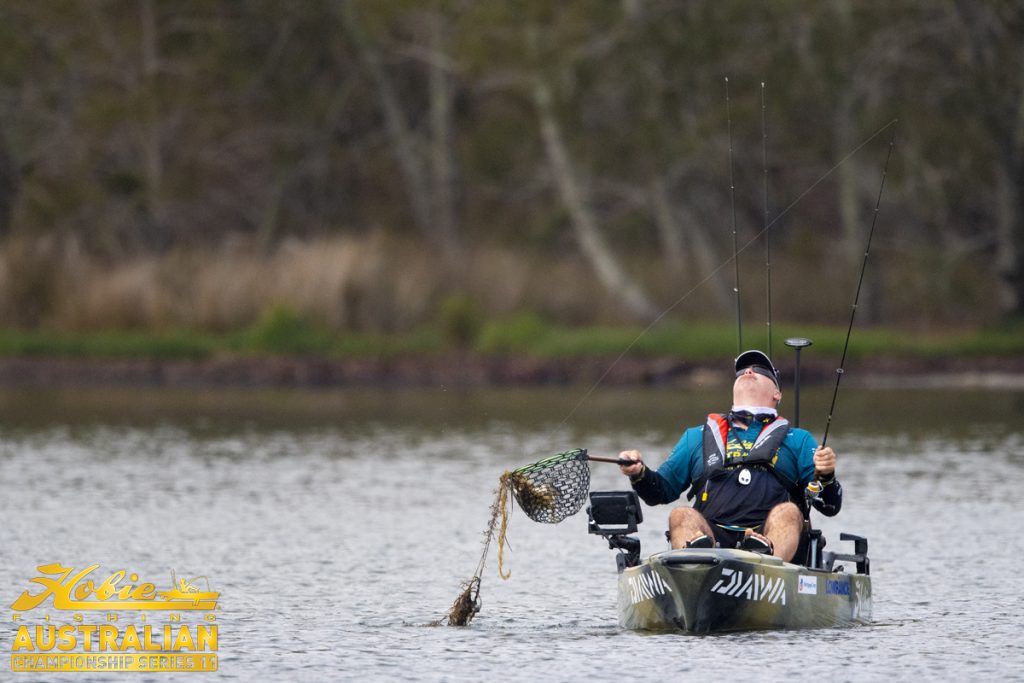 Over the course of the championship he, “pretty much threw the kitchen sink at them”. But the standout lures that worked best were small cranks on day one, on day two plastics were what mostly did the job for him, but he still got a couple on top water with shallow jerk bait cranks. On day three his whole bag pretty much came on cranks, although he did catch a couple of nice fish on soft plastics early in the morning. 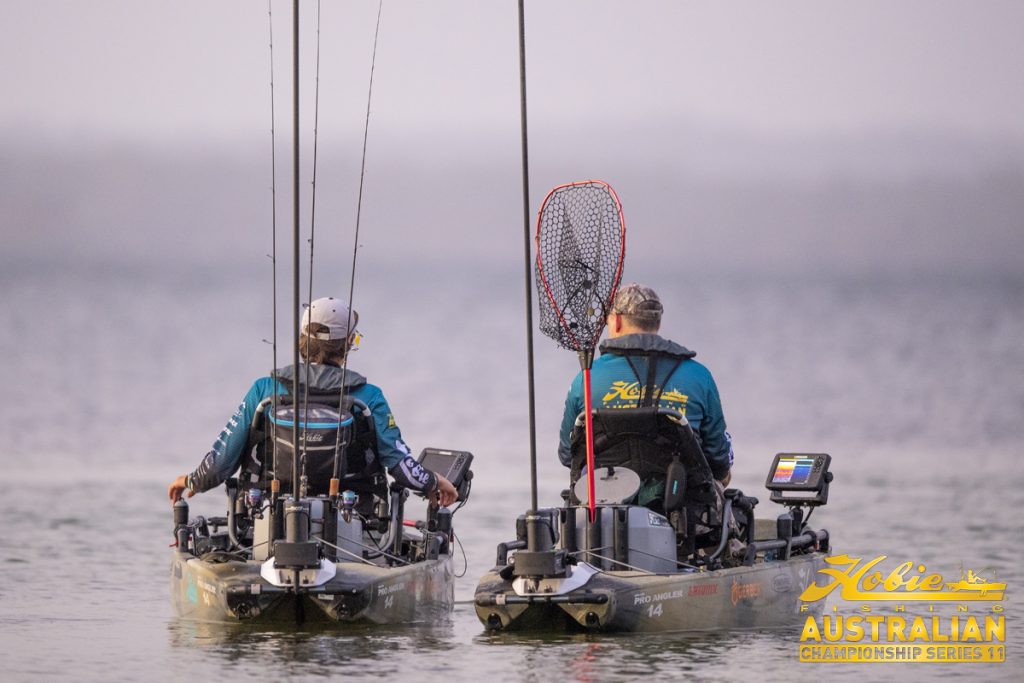 Second placed, finisher Glenn Allen fished around the Sussex Inlet area, on numerous weed beds. He just kept circling the weed and would hit a couple of points that were jutting out towards the beds as he rotated. He tried not to sting any one area too hard knowing that he had a handle on where there were good fish, but with three days of competition he wanted his spots to hold up.

On day one he sat in fourth place on 2.06kg, 450g behind the day one leader James Kilpatrick and just 20g behind eventual winner Kris Hickson. 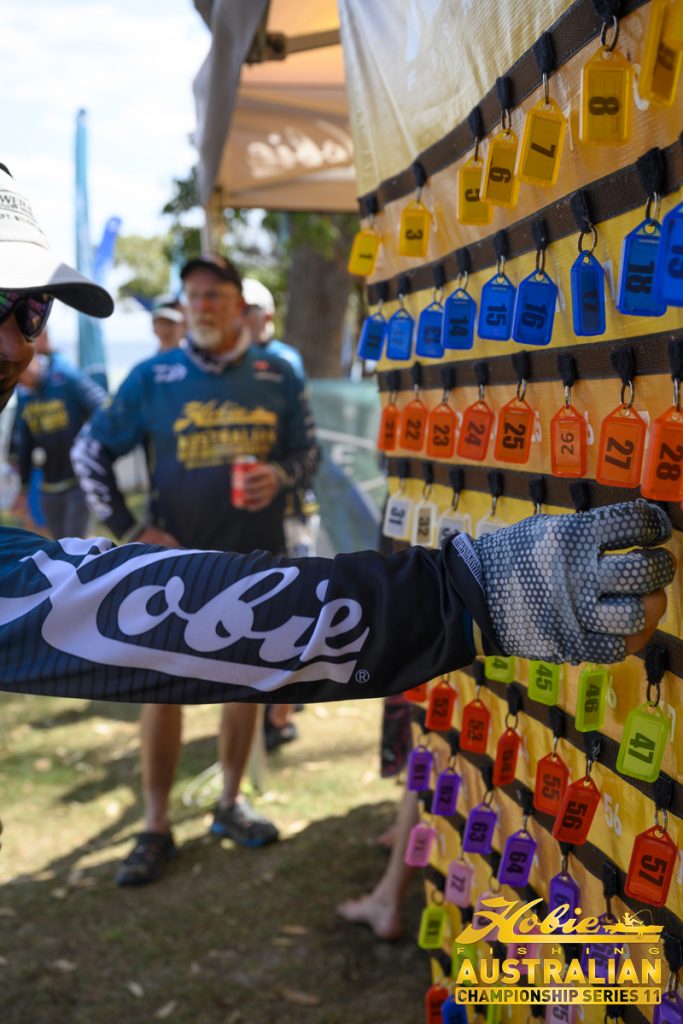 Glenn picked up quite a few fish on soft plastics, but a black crank was the bullet that did the real work for him, particularly on the first two days. On day two using the crank bait as his main weapon he dropped back slightly to fifth place with 1.71 kg for the session and a 3.77kg total. While Kris moved up to top the leader board, with a sizeable 680g buffer over Glenn, with a two-day aggregate of 4.45kg. Kane Terry from NSW sat in second on 4.11kg and Carl Dubois NSW was in third on 4.04kg, Day one leader James Kilpatrick had dropped away to sixth on 3.70kg.

On the final day of the championship Glenn, who had been using Samaki rods, braid and leader with Ecooda and Daiwa reels, had the bag of the tournament with 2.96kg for three fish and finished on 6.73kg. He made some solid ground up on Kris, but the 680g lead Kris had established over Glenn the day before, proved too much to overcome, and Kris’s 2.64kg bag on the day (and that final 400g upgrade) gave him a three-day total of 7.09kg, 360g more than Glenn. 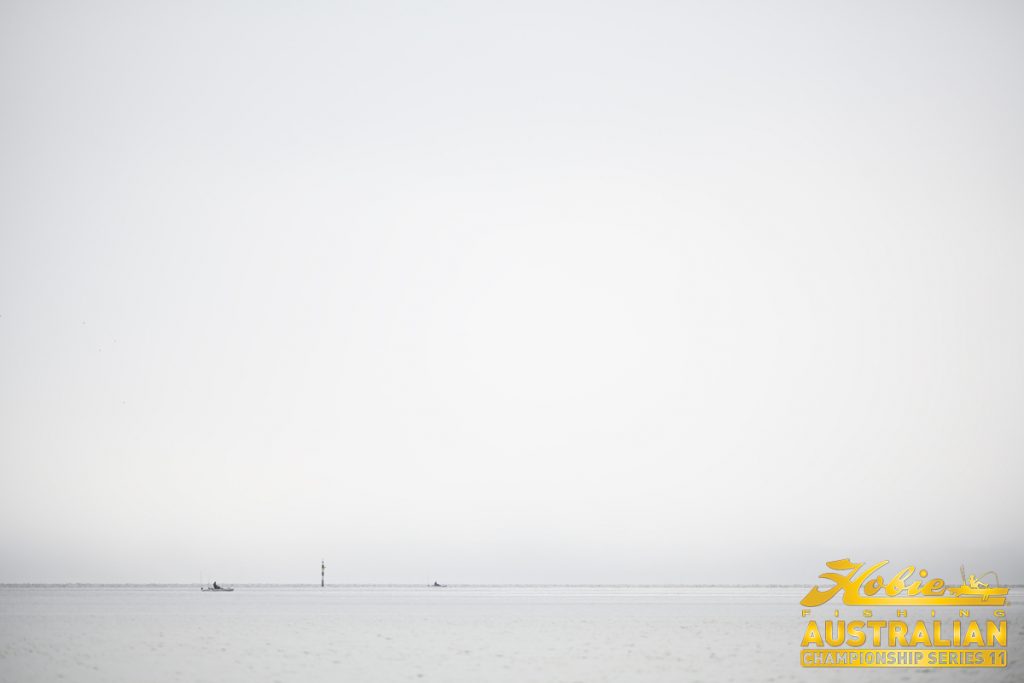 Carl Dubois fell 730g short of second place but was thrilled to take third, having overcome a disappointingly, poor start on day one, with just 2 fish for 1.09kg.

Day one Atomic Big Bream went to Grant Hocking from Victoria with a 1.04kg bream. On day two Stuart Walker won the $250 cash prize with a 1.08kg. On day three Carl Dubois took home the money from Atomic with the biggest fish of the championship coming in at 1.30kg. 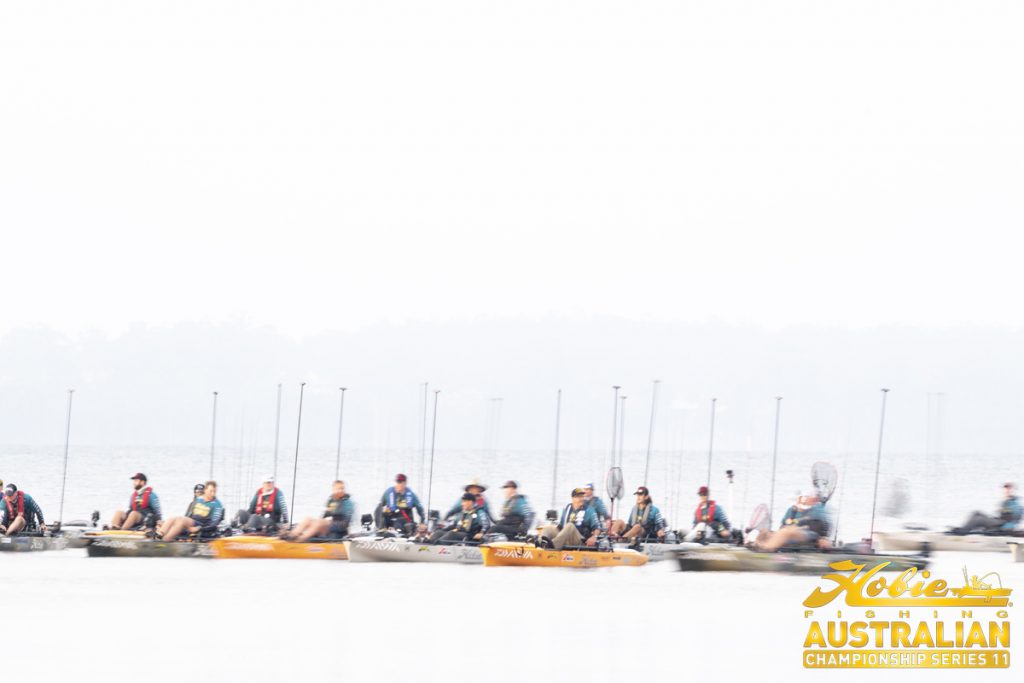