Kayakers will have to use the parking area at the back of the car park as not to affect patrons through the day. (We have had some anglers leave their cars in front of the club doors as well as in handicapped parks. 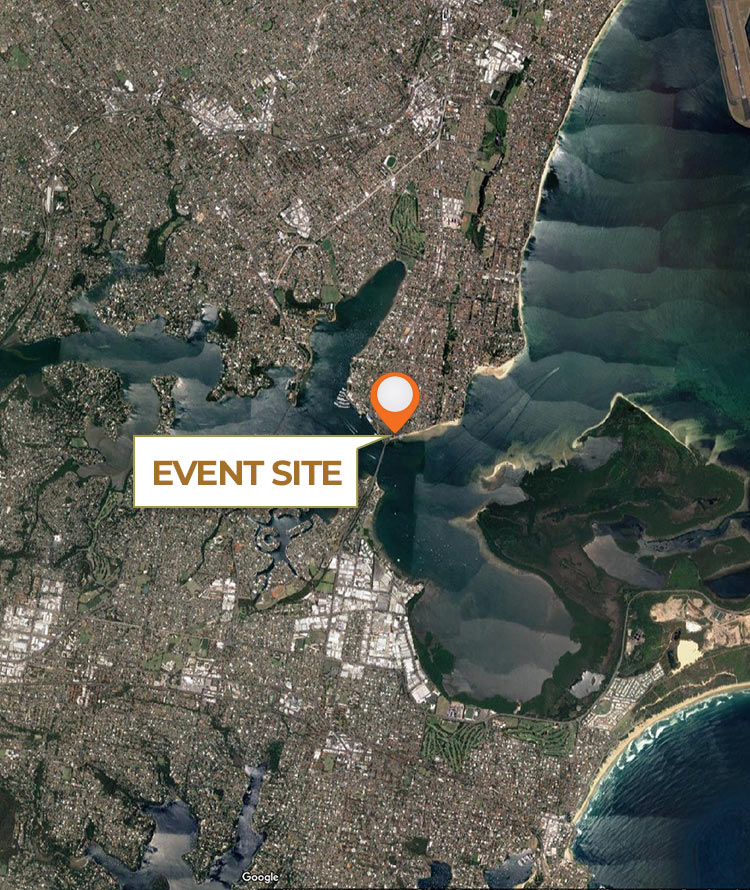 Day One – Weigh In

Day One – On The Water

Round 14 of the Hobie® Kayak Bream Series presented by Daiwa on Georges River in Sydney has been run and won with Mark Compton, from New South Wales, weighing in a full compliment of 6 bream with a total weight of 3.61kg. Brian Hunt (NSW) took second with 6 bream for 3.16kg and Day 1 leader Simon Morley held on to third with 6 for 3.11.

Competitors took off from thew Power-Pole Starting Line in 15-20km winds that eased over the course of the morning. Spreading out across the arena many anglers worked Woolooware Bay while others went further afield to Taren Flats and one mad man pedalled all the way to Lugarno, giving himself a 3 hour trip home. Reports were mixed across the field but still 17 anglers of a 38 competitor field managed to return to the Daiwa Event Site with full bags of 3 bream.

Day 2 saw competitors taking off in 25 – 30 km winds in what was looking like another tough day on the water. The stronger, steadier winds on day 2 combined with the perseverance of the anglers on the water resulted in a good day’s catch for a hard days work and 81 bream were brought to the scales at the end of the session.

When all was said and done it was Mark Crompton from New South Wales who took the top prize of Round 14 and qualified for the Australian Championship. Compton caught 6 bream with a total weight of 3.61kg over the two days climbing from 3rd to 1st on day 2 and received $1160.00 cheque and a Daiwa sponsors prize pack for his efforts.

Crompton’s plan of attack going in to the competition was to head straight to Taren Flats and systematically work as much water as possible.

Mark went on to say, “It was really good to come out and see all the guys and fish a local waterway. We headed out to Taren Flats both days, there was no one else out there and we could feel that it was going to be good fishing. Day 2 was definitely better than day 1. The wind was coming from the east and it died off a bit earlier. We got a hot bite for about 10 minutes or so and that’s when I got my big one. Then I knew I just need two little ones and I’d be OK for the day.”

Brian Hunt from Sydney took second place with 6 bream for a total weight of 3.16kg securing himself a place in the Australian Championship. He landed a kegger on day to that was in the running for the Hog’s Breath Cafe, Boss Hog Big Bream Award but ultimately it was Crompton who took home the $100 prize.

“I was fairly confident coming into the round because I only live 5 minutes away so it’s kind of my local. I just went straight to the racks both days. That’s where I got the big one, he gave me a hard time and got me round two poles but I managed to get him out. I lost my net so I had to cradle him with my hands to get him in the yak.”

Crompton also took out the Hog’s Breath Cafe, Boss Hog Big Bream and walked away with another $100.00 for his his efforts. He landed the 1.15kg kegger on a Juro Long Tail Minnow on a 1/40th hidden weight.

Like all of the events in the Hobie Kayak Fishing Series, this round could not have gone ahead without the great support of our generous sponsors Daiwa, Berkley, Atomic. Lowrance, Rhino-Rack, Strike Pro, Austackle, TT Lures, Yamatoyo, Ecogear, Power-Pole, Mortgage Corp, Hog’s Breath Cafe and ABT. Thanks also to Peter and the crew from Australian Bass Angler for providing Hobie dealer support.

Round 14 of the Hobie® Kayak Bream Series presented by Daiwa on Georges River in Sydney saw 38 anglers take off from the Power-Pole Start line in what was to become a hard day’s work on the water.

17 of a 38 angler field returned with full bags of 3 bream after the first session but ultimately it was Simon Morley, from New South Wales, who was the TT Lures Leader of the Day with 3 bream for 2.16kg. Morley has a 470 gram lead on, Eric Wood (NSW) with 3 for 1.69kg. Mark Crompton (NSW) is currently in 3rd place on today’s Lowrance Leaderboard with 3 bream for 1.58kg.

Competitors took off in 15-20km winds that eased over the course of the morning. Spreading out across the arena many anglers worked Woolooware bay while others went further afield to Taren flats and one mad man pedalled all the way to Lugarno, giving himself a 3 hour trip home. Reports were mixed across the field but still 17 anglers of a 38 competitor field managed to return to the Daiwa Event Site with full bags of 3 bream.

Full bags were hard won with few having the chance to upgrade over the course of the day. At the close of day one, the chase for the Hog’s Breath Café Boss Hog Big Bream, the biggest fish of the tournament, is headed by Scott Carmody, from New South Wales, with his 870 gram specimen.

Day 1 leader, Morley, has a target on his back tomorrow with a 470gram lead on the nearest competitor and only another 150 grams separating the rest of the top 5. Simon has already qualified for the Hobie Kayak Bream Series Australian Championship and a top 6 finish tomorrow will earn him Angler of the year, it’s going to be a big day. We’ll have to wait until the end of what looks to be another excellent session tomorrow to see who will take Georges River in 2015.