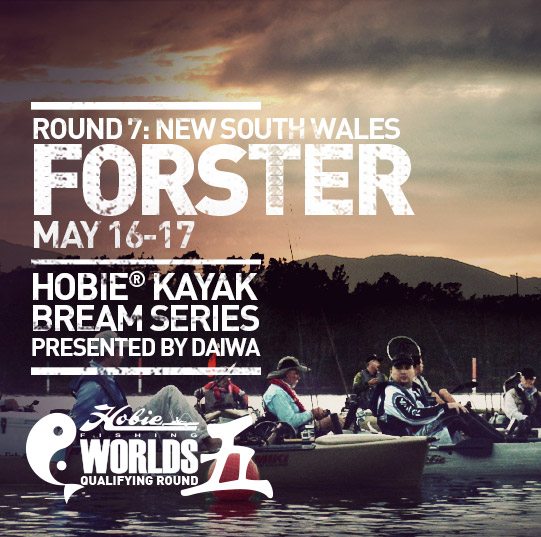 Round 7 of the Hobie Fishing Bream Series presented by Daiwa 16th – 17th May, Forster, NSW.

[/vc_column_text][vc_spacer height=”20″][vc_single_image image=”8785″ img_link_large=”” img_size=”full”][vc_spacer height=”20″][vc_column_text]FORSTER, NEW SOUTH WALES, 17TH MAY 2015 67 kayak anglers, the largest field ever to compete in a New South Wales round of the Hobie Kayak Bream Series, churned up the waters around Forster over the weekend in round 7 of the 2015 season.

In a massively important weekend the country’s best kayak anglers jostled on the Power-Pole Starting Line as they prepared to battle it out for the two places available on the Australian team to compete in the 5th Hobie Fishing World Championship to be held in China later this year. Competitors were also chasing ‘Angler of the Year’, Rankings points, sponsor prize packs, exceptional cash payouts and places in the Hobie Kayak Bream Series Australian Championship to be held on Lake Macquarie in New South Wales.

Most anglers hooked plenty of fish and all had an absolute ball fishing the tournament. Anglers with less experience cranking into racks learnt some tough lessons and tackle box loads of lures were lost trying to wrestle fish out from the oyster racks, poles and washboards that protected them.

On day 1, overcast skies, light rain and 20kph winds embraced the competitors, as the fleet of predominately Hobie Pro Angler and Hobie Outback kayaks, blasted out into the strong incoming tide. As the day developed, heavy rain bursts opened up around the edges of the arena, but rarely threatened the anglers.

The tide, weather and water conditions combined, to create an environment for a great day of fishing, with many anglers beginning to upgrade early in the morning. An impressive 61 of 67 competitors weighed in a total of 157 legal bream, which had an aggregate weight of 82.14kg for day 1.

At the end of day 1, Joel Crosbie from Victoria was the TT Lures Leader of the Day, bringing back an excellent bag of 3 bream at 2.93kg. Crosbie headed Chris Burbidge, also from Victoria, with 3 bream for 2.34kg and Glenn Allen, from New South Wales, with 3 for 2.03kg. At this stage of the tournament Crosbie shared the lead for the biggest bream of the tournament, the Hog’s Breath Café Boss Hog Big Bream, with New South Welshman Matt Cameron. Both anglers brought in a healthy 1.1kg fish to the scales.

The wet weather cleared on day 2 and winds dropped to around 5-10kph with less cloud cover to assist the anglers. World Championship hopefuls were looking forward to the second day of the tournament turning on the bite as it had done on day one. The fishing was generally tougher for most, but there was still a high concentration of fish, and in a lot of locations anglers pulled squeaker after squeaker before a competition legal would finally hit their lure.

The highly competitive 2 day tournament culminated in, Joel Crosbie holding on to his day 1 lead. He collected the top prize money of $1,900, as well as a sponsor prize pack, an Australian Championship place and representative honours at the 5th Hobie Fishing Worlds Championship in China. His 2 day total of 6 bream for a weight of 4.53kg placed him ahead of Glenn Allen who jumped up one place to take out the number 2 position with 6 for 4.15kg and Chris Burbidge from Victoria, finished in 3rd place with a total bag weight of 4.09kg.

Crosbie a previous winner in Round 2 at Marlo, Victoria in February, revealed his plan of attack as he prepared for the tournament.

“On day 1, I had planned to head up the river, where I was hoping to get away from most of the other anglers. Traditionally, at Forster most of the anglers would fish around Breckenridge Channel, I wanted somewhere away from them so I researched using Google Earth to pre plan my attack for the opening day.”

“I got away from most competitors by heading up the Wallamba River and onto a flat that also had rock and oysters. My plan was to hit that flat and to get the fish out rather than to take the risk of trying to get fish out of the racks. The weather helped me out yesterday, being overcast and slightly breezy it gave me plenty of cover.”

“The flat on the river fired and I got my bag early on a Squidgy Lobby. I just worked quickly across the top of the rocks and then mid morning, when I started to throw a Strike Pro Slinky I started to get my big fish including my 1.1kg big bream and another upgrade as well. Once that flat shut down about 11am I pedalled off and started to work the racks for the rest of the day. I got one more upgrade in the racks on a Gulp Shrimp.”

“On day 2 the conditions were clearer and calmer, so the flat didn’t fire very well. I got three small fish off there early, all on the Lobby, after that, I moved into the racks for the rest of the day. I got a couple of little upgrades but that was about it. It was a pretty tough day for me and I was a little nervous about the outcome. Yesterday, I caught about 25 fish and 15 of those were legal. Today I probably only caught about 10 bream with only about 6 of them being legal size. I really didn’t know what to expect when I got back to the weigh-in.”

“The strong tide was perfect, it helped me travel the 5km to get to my location, it worked with me on the way up and it worked with me on the way back. I got to the area that I chose to fish very quickly and the conditions there were excellent and that also worked for me. Even though it was some pretty rough country to try and fish, I had a better chance of getting fish from there, than what I would have, if I had just been fishing the racks.”

Glenn Allen who hooked onto 2nd place also found the fishing excellent but tougher in the day 2 conditions. He took home a $990 purse as well as a sponsor prize pack and can’t wait to go to China for the world championship.

Allen used Squidgy Prawns and Ecooda Crank Deeps on both days to work the racks, as well as, the flats.

On day 1 he ran 4lb leader and found it costly in the racks, losing about 15 lures. He went up to 10lb on day 2 and was able to start muscling the fish out. This was key to his success on day 2, but he also managed to upgrade twice in that session using 4lb leader cranking the flats.

“I pretty much spent two hours on both days working the racks. I was fishing the east side of Bell Island and then I upgraded on the flats on the western side. It was a bit quieter on day 2, earlier in the morning, but as soon as the tide changed and it started running out, the fish came on pretty good. I easily caught a least 50 fish over the weekend, so it was pretty good tournament for me.”

Round 8 of the series will be held on the Glenelg River at Nelson on the border of South Australia and Victoria and will be run by Vic Bream Classics on the 20th and 21st of June.

Like all of the events in the Hobie Kayak Fishing Series, this round could not have gone ahead without the great support of our generous sponsors Daiwa, Berkley, Atomic. Lowrance, Rhino-Rack, Strike Pro, Austackle, TT Lures, Yamatoyo, Ecogear, Power-Pole, Mortgage Corp , Hog’s Breath Cafe and ABT.

Round 7 at Forster of the Hobie® Kayak Bream Series saw the largest field ever to compete in a New South Wales round of the series. 67 anglers took to the water for a shot at the podium and a place on the Australian team in this qualifying round for the 2015 Hobie Fishing Worlds in China.

The competitors headed off from the Power-Pole starting line at 7:00am in wet and windy conditions. An impressive sight, with the majority pedalling Hobie Mirage Pro Anglers and Outbacks into the extremely strong incoming tide.

Fortunately the threatening weather, improved during the session and it was in reasonably comfortable conditions that anglers chased a bag limit of three legal bream.

The field of contenders spread out across the arena, with many anglers working the oyster racks in “The Paddock’ and in “Breckenridge Channel”. The racks were noticeably covered with a lot more water than usual due to large tides and recent rains up stream.

Most competitors though were impressed with what was on offer around the Forster venue. After an excellent days fishing on the pristine mid north coast waterway, 61 of the field of 67 anglers weighed in fish. There was a total of 157 legal sized Bream brought to the scales, with a combined total weight of 82.14kg.

The bream were on the bite, early and continued to smash presentations hard in all areas of the arena throughout most of the day. Upgrades were widespread in most locations with impressive sized Bream being landed among masses of smaller fish. At the weigh-in one angler said that for a solid hour, he managed to land a fish, from almost every cast he threw.

At the completion of the Strike pro weigh-in, Joel Crosbie from Victoria was the TT Lures Leader of the Day with a 2.93kg bag comfortably ahead of the 2.34kg bag of fellow victorian and current Australian Champion Chris Burbidge. Glen Allen from New South Wales weighed in a 2.03kg bag which placed him in third position on today’s Lowrance Leaderboard.

After day one, the chase for the Hog’s Breath Café Boss Hog Big Bream, the biggest fish of the tournament, was headed by two contenders, tournament leader Crosbie and Matt Cameron from New South Wales, who both landed chubby 1.1kg Bream.

With the final day in the event to be completed tomorrow we are in for an excellent session with a tight field of excited competitors hoping to qualify for the Hobie Kayak Bream Series Australian Championship.

The location for the 2015 Australian Championships, Lake Macquarie on the New South Wales Central Coast, was officially announced at today’s weigh-in. The top two finishers will also have the added prestige of representing Australia at the Hobie Fishing World Championship in China.

Who will get to represent the “Green and Gold” in the world championships? We’ll find out tomorrow afternoon. Bring on the Bream, Forster![/vc_column_text][/vc_tta_section][vc_tta_section title=”Results” tab_id=”1401001439730-4-6″][vc_column_text]Day 2