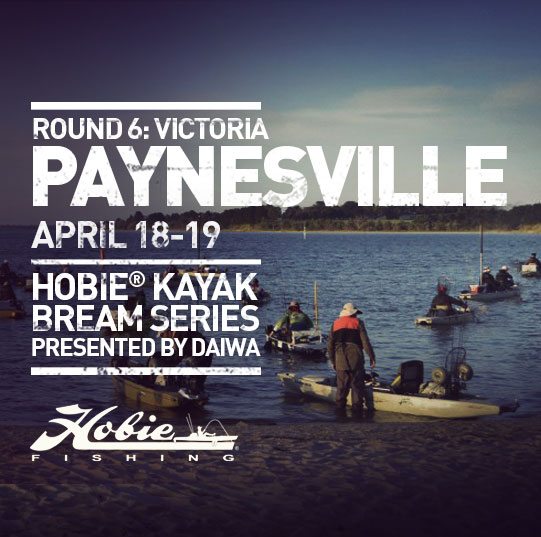 Round 6 of the Hobie Kayak Bream Series was run and won on the 18th and 19th of April, in Paynesville Victoria. Richard Somerton from Montmorency in Victoria took first place with his 6 bream bag weighing a total of 4.96kg

There’s no denying it was a tough event for most anglers with only 62 bream presented to the tournament director over the course of the weekend. Many fish were seen over the two days but unfortunately proved too difficult to convert for most.

On day 1, overcast skies and light rain, which persisted throughout the day, greeted the anglers as they headed off from the Power-Pole starting line. However, the forecast of 10–20 winds knot didn’t eventuate during the session, perhaps contributing to a slow edge bite.

The arena proved difficult for anglers with only 25 competitors bringing fish to the weigh master. Many reported “seeing” bream under boat hulls but were not able to excite the bite while others reported getting busted off around structure and made plans to tie on heavier leaders for the second day of the tournament.

At then end day 1, Richard Somerton from Victoria was the TT Lures leader of the day, bringing back a solid 3 bream bag for 2.35kg. He was followed by fellow Victorians, Nathan Prezioso, with 3 bream for 1.8kg and Mitch King with 2 bream for 1.76k­g. Mitch King, also from Victoria, lead the Hog’s Breath Cafe, Boss Hog Big Bream the heaviest fish of the day weighing in at 1.05kg

The wet weather continued on day 2 and winds picked up to the forecasted 20 –30 knots. Many anglers hoped that the wind would turn on the bite for the second day of competition but unfortunately it was another tough day on the water.

At the conclusion of the tournament, Richard Somerton held on to his lead and claimed the top prize with 6 bream for a total weight of 4.96kg. Nathan Prezioso maintained his number 2 position with 6 for 4.09kg and Rick Massie also from Victoria, climbed from 19th place to take 3rd place and the Mortgage Corp Monster Mover with a total of 4 bream for 2.96kg.

Somerton laid out his plan of attack for the tournament. “My plan coming in was to fish some flats that I’d scoped out a few weeks back but the fish just weren’t on them so I had to go to plan B and just hit boat hulls, jetties and pontoons.”

“I went over to the flats on Saturday morning and there was a lot of grey mud from where the swans had been working so I thought I’d throw sand coloured Cranka Crab on it, so it would stick out a bit, but I didn’t get anything. ”

“I moved down to a couple of pontoons, I was throwing a black crab and I snagged up and lost it. I only had the sand coloured Cranka handy so I threw that and bang, got an 800 gram fish! So I thought ‘Ok then’ and just stuck with it and then all my fish just came on those.”

“Definitely the sand coloured crab! I would throw it in and let sit on the bottom and hop it and slightly drag it and let it sit, and sit, and sit. It was a lot harder on Sunday with the wind because you’ve got to keep watching that line.”

2nd place getter Nathan Prezioso found the fishing tough. “I hit Newland’s Arm on both days. I pre fished there a couple of weeks ago and saw heaps of bream but couldn’t get them to convert. I just took my chances and headed back to where I’d seen fish to see if I could get them to bite. I didn’t catch more than three on each day, with no upgrades, it was tough but it paid off I guess.”

Round 7 is the 2nd of 3 Hobie Fishing Worlds Qualifiers and will be held in Forster in New South Wales, on the 16th and 17th of May.

Like all of the events in the Hobie Kayak Fishing Series, this round could not have gone ahead without the great support of our generous sponsors Daiwa, Berkley, Atomic. Lowrance, Rhino-Rack, Strike Pro, Austackle, TT Lures, Yamatoyo, Ecogear, Power-Pole, Mortgage Corp , Hog’s Breath Cafe and ABT. Thanks also to Anthony and Shaun from Alpine Country Tackle World in Sale for providing Hobie dealer support.[/vc_column_text][vc_spacer height=”20″][vc_separator color=”grey” align=”align_center”][vc_spacer height=”20″][vc_column_text]

Paynesville Victoria, 18th April 2015: Day one of the Paynesville round of the Hobie® Kayak Bream Series saw 55 of the country’s best kayak anglers head off from the Power-Pole starting line at 7:00am.

Overcast skies and light rain persisted throughout the day. Forecasts of 10-20 winds knot didn’t eventuate during the session, perhaps contributing to a slow edge bite.

The Paynesville arena is a legendary, East Gippsland, fishing location but proved difficult for today’s anglers with only 25 competitors bringing fish to the weigh master. Many anglers reported “seeing” bream under boat hulls but were not able to excite while others reported getting busted off around structure and will be tying on heavier leaders tonight.

At the completion of the Strike Pro weigh-in, Richard Somerton from Victoria was the TT Lures leader of the day, bringing back solid 3 bream for 2.35kg.

Richard is followed by fellow Victorians, Nathan Prezioso, with 3 bream for 1.8kg and Mitch King with 2 bream for 1.76kg. King is also the current Hog’s Breath Cafe, Boss Hog leader with his 1.05kg Big Bream.