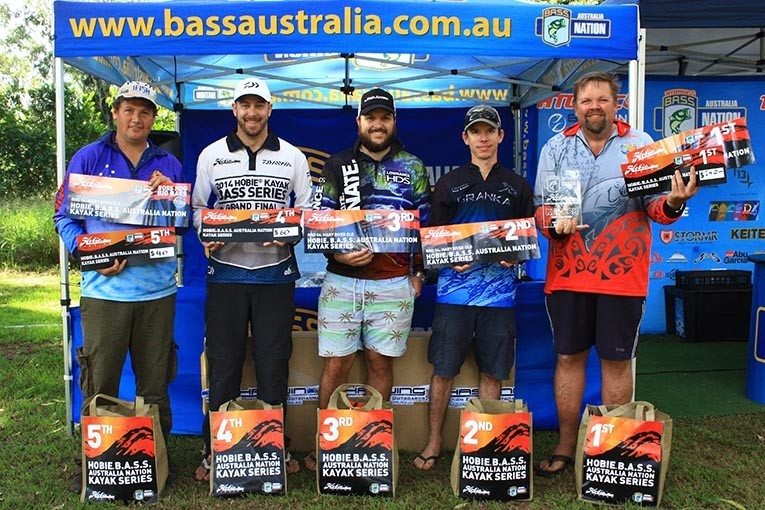 Round 4 of the Hobie B.A.S.S. Australia Nation Kayak Series 31 May, Mary River, Qld.

The fourth of the bass rounds was held at the most northern point of the circuit in Tiaro Queensland, on the iconic Mary River. If you have never made the trip to this location you are missing out on seeing true gem of the bass fishing world, with countless over hanging trees and endless amounts of snags making this a kayak anglers paradise. From Tiaro itself you can head right into deeper water with over 30kms of clean river with copious amounts of snags and to the left it shallows up for well over 100kms of Kayak only terrain. There are many species on offer including bass, barra, sooty grunter and of course the Mary River Cod. The Mary River Cod are rightfully 100% protected and at no time should any angler target or remove them from water, keep that in mind if you are travelling through the area.

The weather over the previous weeks was bad at best, and the river had suffered from quite a large inflow from the surrounding areas, putting it into the difficult to fish category. The water’s clarity was still murky but some anglers still found some real quality fish and Peter Bostock from Brisbane landed a very solid full limit (3/3) of 109cm’s to secure the win.

Peter a BCF Manager from Brisbane had a plan to head to the junction area down stream where the creek runs in the river, but after about 30 minutes of paddle and with the fog over the water he just couldn’t resit fishing a surface lure. He decided to fish a Bassday Sugar Pen 70 Float in MB 16 colour early and it paid off with 2 bass on the ruler in the first couple of hours, then once the fog lifted he switched to a Jackal Chubby crankbait technique to finish off his bag. Using a Lox 2-5lb Yoshi Snapper rod matched with a Shimano Stella 2500 FI reel Peter made the critical decision to cast as close as possible to the bank where the bass were sitting in the under-cut edges. Using the Suger Pen to slowly walk it back the kayak he found the majority of strikes came around the edges and structures. Peter filled his spool with Berkley 4lb Nanofil mainline and Berkley 4lb Vanish 100% Fluorocarbon.

In second place Steven Maas got a 2/3 bag and 75 cm’s to take out second place. Steven decided to fish in a total different direction to the other anglers and headed 8km’s up stream to catch his bass. Working a drop off area he had found in pre-fish he looked down on his sounder and noticed a lot of bait so he decided to focus in that area. Steve was using a spin-jig from TT’s with a black and red Hooked on Pastics 3 inch fat grub that he would cast out into 6 metres of water and slowly roll back to the kayak with small twitches. Steve’s outfit consisted of 13 Fishing Australia Omen Black matched with a Daiwa Lexar reel, 4lb Berkley Fireline mainline and 4lb Sunline FC Rock leader. Steve also wanted to thank his major sponsor Cranka and Steve Steer for all the support he has received throughout the season.

Rounding out the top 3 was Windsor local Jarryd Aleckson with a 2/3 bag of 72cms. Jarryd targeted bass down stream quite differently to most of the other anglers as he used his Lowrance sounders to locate bass on deeper snags and slowly rolled spinnerbaits through the structure. Jarryd used his side scan and structure scan to find bass sitting in water over 4 metres with lie-downs at the bottom of them and focused on this particular pattern. Using a 13 Fishing Black envy 610 Medium rod matched with a Shimano Scorpion 1500 reel spooled with Sunline Super PE mainline and Rock Fish leader, Jarryd would cast out his 1/2 ounce Damiki Short Strike and let it sink through the structure all the way to the bottom before retrieving the spinnerbait. He found the bass would hit the lure as it bumped off the structure.

Check out the presentation here.

The Hobie Mary River Wrap!
We are extremely excited about the Hobie series and what it has to offer the fishing community. The kayak anglers have a massive passion for the sport that will rival any other series and we want to encourage anyone interested in stepping and having a go. It is always very difficult to beat the calibre of anglers that turn up to these tournaments so all the winners should be congratulated. Next up we travel to the Wivenhoe basin with a huge amount of water and the largest bass in the country, this should be an incredible tournament.[/vc_column_text][/vc_tta_section][vc_tta_section title=”Results” tab_id=”1396571281-2-48″][vc_column_text]