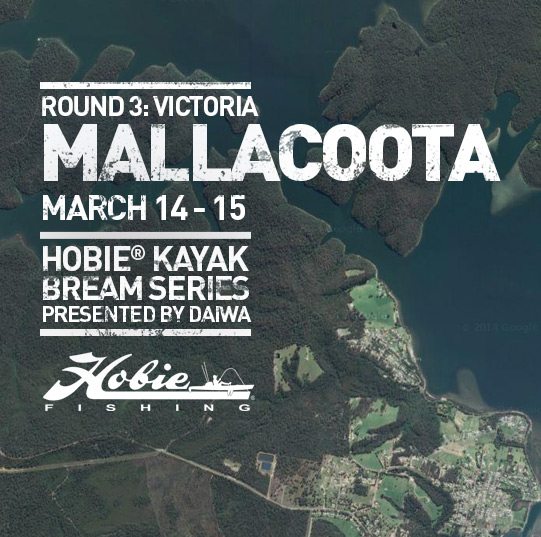 Congratulations to Tony Pettie from Traralgon in Victoria on taking out Round 3 at Mallacoota in Victoria and qualifying for the Hobie Fishing Worlds in China. Tony weighed in six bream over the two days for a total weight of 6.07kg. Fellow Victorian, Ben Phayer claimed second place as well as the second place on the Australian team for the Worlds in China with his 6 for 5.12kg. Third place was picked up by Joshua Smith, also from Victoria with his 6 for 4.98

[/vc_column_text][vc_single_image image=”7806″ img_link_target=”_self” img_size=”full”][vc_separator color=”grey”][vc_spacer height=”20″][vc_column_text]On March 14 and 15, 2015, 78 of the countries finest kayak anglers from Victoria, New South Wales and the ACT descended on the popular holiday town of Mallacoota in Victoria to compete in round 3 of the Hobie Kayak Bream Series presented by Daiwa.

While anglers were looking for the round win, they were also chasing points towards Angler of the Year (AOY), Rankings and, most importantly, the 2 spots on the Australian Hobie Fishing Team available from this 1st of 3 qualifying rounds for the 5th Hobie Fishing World Championships to be held later in the year on Shang Lake in China.

On both mornings, the anglers headed off from the Power-Pole starting line, splitting in direction with half the field heading for Top Lake & The Narrows and the other half opting for Bottom Lake.

It was those who worked Bottom Lake who seemed to bring the bigger bream to weigh-in each day. More than half the field brought full bags of 3 bream to the tournament director each day and a total of 304 bream, weighing 207kg were presented to the weigh master over the course of the two days before being released back into the system.

Day 1 leader and eventual tournament winner Tony Pettie from Traralgon in Victoria had a solid 3 bream bag for 2.86kg going into the second day of the tournament.[/vc_column_text][vc_spacer height=”20″][vc_single_image image=”7807″ img_link_target=”_self” img_size=”full”][vc_separator color=”grey”][vc_spacer height=”20″][vc_column_text]Tony Pettie held on to the number 1 position on the Lowrance Leaderboard netting the first place on the Aussie team for the Worlds in China, a qualifying position in the Australian Championship, as well as an excellent sponsor prize pack and a $2,245 cheque for his efforts. Tony also took home an additional $100 for landing the Hog’s Breath Café BOSS HOG Big Bream with his 1.24kg bag kicker from day 1. Consistency was the name of the game as Tony laid out his plan of attack:

“Gotta love the reverse start. I went back to my first spot from day 1 and found 10 to 15 others there, it was terrific to see every one hook up but me. I moved down the Goodwin sands a bit and caught my first fish, 10 min latter I had caught another 3. I moved to where I had caught my biggest fish on day 1 which paid off with 2 more upgrades. I then moved into Dorran Bight where I lost 1 fish, the only touch that I did get. I went back to my hot spot and got another quality upgrade. My day 2 bag weighed 3.21 kg and kept me in First place.”

Pettie had no doubts about what gave him the winning edge in the tournament. “I just wanted to work Goodwin Sands. I’ve done alright there before. It holds good fish. There’s a bit of channel there so I was just fishing the shallows and bringing it down in to the deeper water with a slow roll and an occasional pause and twitch”.

Pettie summed up his feelings on being the first to make the squad to represent Australia at the Hobie Fishing World Championship in China this November. “I had a really good couple of days, loads of fun and winning a spot on the Australian team is just awesome. I just have to let the wife know now”.[/vc_column_text][vc_spacer height=”20″][vc_separator color=”grey”][vc_spacer height=”20″][vc_column_text]

[/vc_column_text][vc_single_image image=”7808″ img_link_target=”_self” img_size=”full”][vc_separator color=”grey”][vc_spacer height=”20″][vc_column_text]Ben Phayer from Victoria followed up a 1.94kg bag of 3 bream on day 1, with an impressive day 2 bag of 3.18kg for an accumulated 6 fish weight of 5.12kg. This was short of the top prize by .95kg, but enough to give him a 200 gram lead over third place finisher, Joshua Smith also from Victoria. Phayer recounted his weekend’s efforts on the water.

“I knew that the Goodwin Sands was a productive area so I planned to fish there but by 10:30 I didn’t have a fish. Shortly after I worked out that the fish were on the flats in very shallow water and got my first and second fish quickly but the third eluded me at this stage. I then headed to the front of the flats where there was a really rocky area in only 300mm of water. BANG… Got my third of over a kilo, finishing with a respectable bag of 1.94kg placing in 19th but way under the 2.5kg average expected to get a top 5 place.”

“I was confident that the same area would produce fish especially with the strong winds forecast. I got to the sands inside the southern green channel marker. First cast… a kg+ fish, second cast another. Hmm maybe a good day…. As the storm rolled across with the wind and rain the fish shut down. After a few hours I had a bag but needed to upgrade the small fish to go with the 2kg plus in the well. I went back to where I got the other fish and yet again almost first cast I had my upgrade. “ “I was confident that this was the biggest bag I had ever weighed in and thought a top 10 may have been in reach. My bag weighed 3.18kg putting me straight in 1st place…. WOW… The nerves started.” On earning a spot on the Australian team Phayer said. “Finishing 2nd place!!! To qualify for the grand final was my aim for the season but to qualify for the Hobie Worlds in China is an honour and a dream come true.” Tackle Used

The Monster Mover for Round 3 was Steven Pryke who moved up 32 places position. After finishing day 1 in 63rd position with no fish, Steven went on to smash it on day 2 and with a 3 fish bag for 3.04kg.

Like all of the events in the Hobie Kayak Fishing Series, this round could not have gone ahead without the great support of our generous sponsors Daiwa, Berkley, Atomic. Lowrance, Rhino-Rack, Strike Pro, Austackle, TT Lures, Yamatoyo, Ecogear, Power-Pole, Mortgage Corp , Hog’s Breath Cafe and ABT. Thanks also to Stewie, Tony and Leaf from Compleat Angler in Merimbula for providing Hobie dealer support.[/vc_column_text][vc_spacer height=”20″][vc_separator color=”grey”][vc_spacer height=”20″][vc_column_text]

Mallacoota Victoria, 14th March 2015: Day one of the Mallacoota round of the Hobie® Kayak Bream Series presented by Daiwa saw 77 (78 registered) of the country’s elite kayak anglers mixed with an encouraging batch of rookies blast off from the Power-Pole starting line in excellent conditions. Smoke from local bush fire prevention efforts lifted early and a light breeze continued throughout a fantastic day for the first of three Hobie Fishing Worlds Qualifiers. The Mallacoota arena is a legendary fishing location and day one didn’t disappoint with more than half the field bringing full bags to the tournament director. 146 bream were caught and released back into the system with a total weight of 95kg brought to the weigh master at the close of the day. The arena is massive, with anglers splitting almost 50/50 between the Top Lake & The Narrows and The Bottom Lake. It was the anglers who worked The Bottom Lake who seemed to bring the bigger bream to weigh in. At the completion of the Strike Pro weigh-in, Tony Pettie from Traralgon in Victoria was the TT Lures leader of the day, bringing back an excellent 3 bream for 2.86kg. He also holds the lead in the Hog’s Breath Café BOSS HOG Big Bream with a 1.24kg bag kicker. Tony is closely followed by the 2.69kg bag of second placed angler Chesney Fung from Balwyn North in Victoria while Patrick McQuarrie from The Entrance in New South Wales took third with his 2.58kg bag. The forecast weather conditions currently look good for an excellent final day of this World Championship qualifying event. Come tomorrow afternoon, we will know our first two Australian representatives for the Hobie Fishing World Championships to be held in China, later this year.[/vc_column_text][/vc_tta_section][vc_tta_section title=”Final Results” tab_id=”1401001439730-4-6″][vc_column_text]