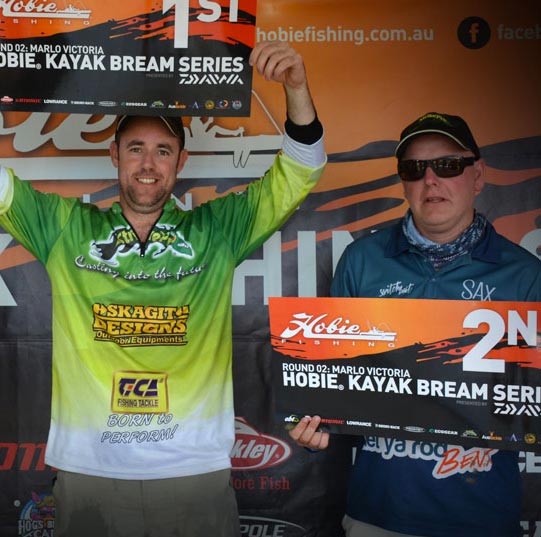 JOEL CROSBIE CONJURES UP SOME SNOWY RIVER MAGIC AT MARLO

On February 21 and 22 the host township for round 2 of the Hobie® Kayak Bream Series presented by Daiwa was the Victorian fishing mecca of Marlo. The small community is situated, in the East Gippsland district of Victoria at the mouth of the Snowy River and has arguably become one of the most popular tournament locations on the Hobie Kayak Bream Series calendar.

Round two of the series saw 65 Anglers made up of 46 Victorians, 13 from New South Wales, 3 from the ACT and 2 South Australian anglers tangle for the top prize. The haul of fish that was brought back to the scales over the two days of the tournament numbered 191 bream with a total accumulated weight of 121.53kg. The fish were then released safely back into the waterway.

The fishing had been predicted to be difficult as the Snowy River catchment area had carried a large amount of rain into the system making the water an incredible rust, brown with silt clouding most of the fishing arena while flow of cleaner water, from the mouth, clearly defined itself from the heavier silt.

The challenging water meant the anglers had their work cut out for them to bring in three bream each day to the Daiwa Event Site for weigh in. Despite the challenging conditions the arena fished well with many anglers successfully reaching the three bream bag limit each day.

On the opening morning of the two-day tournament 65 anglers headed off from the Power-Pole starting line with heavy cloud cover keeping the temperatures from reaching the predicted mid thirties. An unexpected sea fog rolled in at 12:30, becoming soupy and difficult to see in at times, but it dissipated as the session drew to a close.

Contrary to angler’s expectations the arena fished surprisingly well. After a slow start on the low tide, the usual big, hungry Marlo bream did come on the chew deep in the far lake and in and around the river mouth producing the good size catch that the system is famous for.

At the completion of the Strike pro weigh-in, Dave Hedge from the Central Coast of New South Wales was the TT Lures leader, bringing back an excellent 3.52kg bag, well ahead of the 2.68kg bag of the eventual round winner Joel Crosbie from Victoria.

In contrast to day one, clear blue skies greeted anglers as they departed the Atomic Launch Site, to position themselves for the start of the final day of competition. The field headed on to the Austackle Arena hoping to improve on Saturday’s catch.

After two long, hard days of fishing, competitors arrived back at the event site with another good haul of fish and waited at the Berkley Bump Tub to be rushed up to the scales for the Strike Pro Weigh-in. Joel Crosbie from Mirboo North in East Gippsland, Victoria hooked the top position on the Lowrance Leaderboard with 6 bream for 5.58kg. Second place went to Corey Gallagher from Ocean Grove in Victoria with 6 for 4.66 and a third Victorian, Martin Fellows snared the final place in the top three with his 6 bream weighing 4.36.

Crosbie, who has fished Marlo in most Hobie Kayak Bream Series tournaments, initially planned to follow a tried and true plan of attack.

“Given that I’ve fished nearly every tournament that has been held here, my usual plan is to go down and fish the front of the system. But that didn’t go to plan. I had to come halfway back, just down stream from the event site towards the entrance and there I found the fish I was after in the deep water”.

“I was just blading, sitting in about 12’ of water. There were massive schools of fish there. There was actually quite a bit of bi-catch today as well. I think I caught about a half dozen ‘Luddies’ luderick, flathead, trevally, so there were big schools of fish all stacked up, down the front, and my game plan was just to deep blade them. 12’ seemed to be the magic number today as I bladed across the sand”.

Crosbie had no doubts about what gave him the winning edge in the tournament.

“I think definitely the new prototype Strike Pro lure was what gave me the edge over the other competitors. We only have eight in the country and I was lucky enough to get my hands on two of them. The new blade has a polycarbonate belly with ball bearings in it so it actually rattles. It’s slightly different to your normal blade. It was just giving the fish something different to what everyone else was using”.

He went on to say.

“I’d like to thank Hobie for running these tournaments, I love them and participate in them at every chance I can get. Also, to my sponsor Strike Pro, thanks to Rick Massie and the guys at Strike Pro for really looking after me all the time, and also my local Hobie dealer Dave Walsh down at Inverlock. He always helps me out and he gave me a new MirageDrive to use this weekend, so I really appreciate that help as well”.

Crosbie is going into the Mallacoota round of the series, with a 2015 season win under his belt. He is now hoping to take out one of the two spots to represent Australia in the Hobie Fishing World Championship that will be held later this year.

Corey Gallagher from Ocean Grove in Victoria netted a full bag of bream on both days with an accumulated weight of 4.66kg, short of the top prize by .92 of a kilo. It was enough however, to give him an advantage of .40kg over third place finisher Victorian, Martin Fellows.

Gallagher summed up his two days fishing the cloudy waters of the Snowy River estuary at Marlo.

“I fished edges all weekend around the two islands and because of the colour of the water I decided to throw plastics because I can fish them a lot slower. I used Z man GrubZ using UV colours. I just kept working around the edges, I just plugged away and stayed patient and the fish would come around every now and then. I wasn’t hit with a big run of fish or anything like that. On the first day I was in fifth position with a bag weight of 2.18kg, I wasn’t feeling that confident because I’ve never finished in a position like this before so it is a good feeling. Actually, I was just hoping to hang onto that fifth place, but I got a 1.3kg fish with about 40 minutes to spare, so that was the big one for me, I was pretty stoked when that got netted”.

The latest bonus for anglers in the Hobie series, is the Mortgage Corp Monster Mover Prize Pack for the most improved over the two days. The lucky winner for this round was Paul Davison from Victoria who came from equal 50th at the close of day one to finish in 21st place with a 2.63kg bag. Paul also received an accommodation voucher from the Marlo Caravan Park and Motel for his efforts.

The next round is going to be HUGE. Round three at Mallacoota in Victoria, on March 14-15, is the first of three rounds where the top two anglers will not only win a place in the Australian Championship but also a place on the team to represent Australia at the prestigious Hobie Fishing World Championship. You just have to try your luck and throw a lure or two at “Coota” to have a chance at that one.

Thanks to another of our great Hobie Dealers for helping out with the Hobie Kayak Bream Series, Anthony Di Corleto and his son Maximus, from Alpine Country Sale, provided dealer support, and prepared and supplied an excellent BBQ, drinks and snack packs on both days of the tournament. Like all of the events in the Hobie Kayak Fishing Series, this round could not have gone ahead without the great support of our generous sponsors Daiwa, Berkley, Atomic. Lowrance, Rhino-Rack, Strike Pro, Austackle, TT Lures, Yamatoyo, Ecogear, Power-Pole, Mortgage Corp , Hog’s Breath Cafe and ABT.[/vc_column_text][vc_spacer height=”20″][vc_separator color=”grey”][vc_spacer height=”20″][vc_column_text]Day 1 Report

DAVE HEDGE LEADS ON DAY ONE ON THE SNOWY.

Day one of the Marlo round of the Hobie® Kayak Bream Series saw 65 of Australia’s best kayak anglers head off from the Power-Pole starting line in overcast conditions with a light breeze blowing in from the NNE. The temperature was forecast for low thirties however the cloud cover kept the mercury in the mid to high twenties and an unexpected sea fog rolled in at 12:30 surprising and cooling down everyone on the waterway.

Anglers were chasing a bag with a maximum catch of three bream at the iconic fishery situated in the East Gippsland region of Victoria. The Snowy River which feeds into the waterway had carried a large amount of rain recently bringing a lot of fresh water into the system creating an incredible rust brown silt clouding most of the fishing arena. Finding quality water was the task at hand and a tough ask in many locations.

Contrary to angler’s expectations the Marlo arena fished surprising well with a sizeable proportion of anglers bagging out and over 60% of competitors bringing fish to the scales. Ultimately 108 bream weighing a total of 66.86kg were brought to the weigh master at the close of the day.

Dave Hedge from the Central Coast of New South Wales was the TT Lures leader at the close of day one, bringing back an excellent 3.52kg bag, which dominated the quality 2.68kg bag of second placed angler Joel Crosby from Victoria. Another Victorian, Dean Gamble, weighed in a nice 2.39kg bag which placed him in third position on today’s Lowrance Leaderboard.

Peter Whelan from Victoria currently leads the Hog’s Breath Café Boss Hog Big Bream with the biggest fish of the day, which weighed in at 1.52kg.

Forecast conditions currently look good for the final day of the event with water conditions hopefully improving overnight. Tomorrow more places in the Hobie Kayak Bream Series Australian Championship, to be held at the end of the year, are there for the taking.[/vc_column_text][/vc_tta_section][vc_tta_section title=”Video” tab_id=”1424551480108-5-7″][vc_column_text]

Final weigh in and presentation

Day One: Weigh in