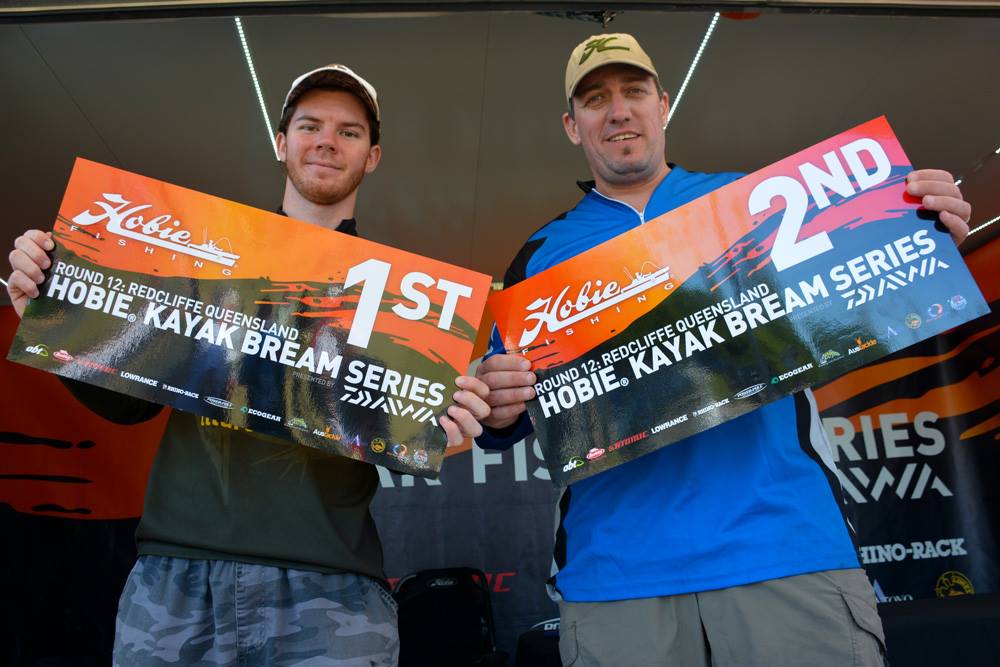 Congratulations to the Hobie Kayak Bream Series, Round 12 winner Guy Struthers from Queensland and second place getter Neil Carstairs from Victoria who will represent Australia at the Hobie Fishing World Championship on Shang Lake in China in early November.

[/vc_column_text][vc_single_image image=”9827″ img_size=”full”][vc_spacer height=”30″][vc_column_text]August 22 and 23 was a huge weekend in the Hobie Kayak Bream Series on Deception and Morton Bays in Redcliffe, Queensland! Anglers tussled for excellent prize money, sponsor packs, Angler of the Year and Series Ranking points and qualification in the Australian Championship. Most important of all though were the two places on the team to represent Australia at the 2015 Hobie Fishing World Championship in China.

Just 40 minutes north from Brisbane, the waters off Redcliffe offered up sand banks, channels, rock walls, shoreline reefs and canal systems for the anglers. The tournament buzzed with anticipation as a swarm of the country’s best kayak anglers – from three Australian states – gathered on the Power-Pole Starting Line loaded with a tackle store full of gear. The battle was on![/vc_column_text][vc_column_text]

Glassy conditions greeted the anglers on day 1 and the field split in two distinct directions. Many traveled a long way down the coastline to reefs and structure further south while a smaller group journeyed, in the opposite direction, to the boats and jetties of the canal system.

It was a solid day on the water and a large number of anglers came home with their full bag of 4 bream in what was at times a difficult bite. As the tide began to rise the fish became more active across the AusTackle Arena and while a lot of anglers reported that they were able to entice the bite, the fish were difficult to keep hooked, and bust offs were common around the many reefs. Upgrades were scarce, nevertheless some exceptional bream were brought aboard the kayaks, with 4 kickers that weighed in at over a kilo on Day 1.

At the end of the day’s Strike Pro Weigh-In, Steve Crawley from Queensland headed the Lowrance Leaderboard with 2.60kg. He sat 40g ahead of fellow Queenslander Guy Struthers on 2.56kg and Jason Garner, also from Queensland, brought in a solid 2.51kg bag and sat in third place.

The competitors headed off on the final day with slightly less cloud cover and some patchy fog. The more successful anglers from Day 1 were sticking with what was working, in hope of a repeat to the previous day’s performance, while others re-adjusted their tackle and plan of attack.

The glassy conditions and water clarity made for tough going across the board on day 2. These conditions coupled with a pair of spear fishermen were too much for Day 1 leader – Steve Crawley as the spear fishos proceeded to spook the reef that he had pinned his hopes on. His luck and a chance to represent Australia were speared.

After an excellent Day 1 sitting in second position and a solid day two, Guy Struthers from Queensland, scooped the tournament’s treasured top prize and took home $1,000, a place at the Australian Championship on Lake Macquarie in November and the honour of representing Australia at 2015 Hobie Fishing World Championship in China.

Struthers snatched his victory with a two-day bag of 8 bream for a total weight of 4.08kg. Neil Carstairs from Victoria jumped up from his Day 1, 4th position to second and take out the final place on the Aussie team heading to China with 7 fish for 3.56kg. Michael Maas, from Queensland, netted 3rd place with 8 fish weighing in at 3.37kg.

The Mortgage Corp Monster Mover for the biggest move up the leaderboard from Day 1 to Day 2, – was taken out by Marco Grubb, from Queensland with a total catch of 2 bream for 1.76kg, Grubb also took home the Hogs Breath Café Boss Hog Big Bream prize for the biggest fish of the tournament.[/vc_column_text][vc_spacer height=”30″][vc_column_text]

[/vc_column_text][vc_single_image image=”9811″ img_size=”full”][vc_spacer height=”30″][vc_column_text]An elated Guy Struthers, now an Australian representative, had a formula for the tournament that he struck to for the two days of competition.

“I had a couple of reefs in mind, that have been fishing pretty consistently over the last couple of months and I headed down there just south of the Redcliffe Jetty and that’s pretty much where I got all of my fish. I probably travelled around 15km with a bit of spot hopping, hitting all of the bommies and reefs along the way. I probably travelled around 25km each day but in the end I really had only one main reef in mind – that was always my intended location to hit hard – because I knew it was working”.

“I was initially throwing Z-man Grubz and Atomic Hardz Deep Diver in Ghost Gill Brown. When the going got really tough in the wind, I’d throw cranks as they create more of a reaction bite. When the wind was really low I would throw the 2½ inch ZMan Grubz into some pretty tight country”.

“I was a late entry and this was my first comp for the year, so the win today was quite a surprise and I was pretty stoked to take the top prize. The furthest I’ve travelled is to Perth for the Hobie Grand Final last year, so going to China is going to be a really different experience for me. I don’t even have a passport yet, so I guess I’ll have to get one pretty soon. I’m seriously stoked about the whole thing though.”

“I think the home ground advantage played a big part in my win over the weekend. Most of the time when I come to Redcliffe I try to get away from the other competitors because the area has a lot of pressure placed on it when there are a lot of kayaks. So I knew were to go and what to stay away from”.[/vc_column_text][vc_spacer height=”30″][vc_column_text]

[/vc_column_text][vc_single_image image=”9815″ img_size=”full”][vc_spacer height=”30″][vc_column_text]Having travelled all of the way from Victoria to Queensland, just to compete in the tournament, Neil Carstairs was very excited as he summed up his two days on the water.

“On Day 1 I hiked it down the coast about 7km towards the bridge to a place called Red and Greens, just before I got there I hit a reef and got nothing, so I moved on to Red and Greens and got nothing there as well. I gave up on that and headed back to the reef. All of a sudden – Bang! – I pulled a 1.14kg fish. My ultimate goal was to come to Redcliffe and catch a 1kg plus fish. So having done that, it made my whole weekend regardless of the great things that were to come. I caught a couple more fish working a Camion Dredge and a ZMan Bloodworm as well. I got my last fish in about the last five minutes of the day out the front on the flat”.

“On Day 2 I did about 18 to 19km all up, I went all the way down past the marine park for absolutely nothing. I came back and got my first fish in the patch where I got my early fish yesterday. That was good. Then I went around a corner and the wind had picked up, so I went in close and got another two fish and that made my bag for the day. Now I’m going to China, baby! Woooooo”.[/vc_column_text][vc_spacer height=”30″][vc_column_text]

[/vc_column_text][vc_single_image image=”9831″ img_size=”full”][vc_spacer height=”30″][vc_column_text]Marco Grubb hooked the Hog’s Breath Cafe, Boss Hog Big Bream prize with his 1.39kg bream. He captured the Redcliffe bruiser out on the reef with his very first cast on Day 2 with a Spotted Cranka Crab in light.

Round 13 of the series will be held in Perth, Western Australia on Sunday August 30. Round 14, the final round of the 2015 series – prior to the Australian Championship Tournament – will be on the Georges River in Sydney, New South Wales on October 17 and 18.

SPECIAL THANKS Like all of the events in the Hobie Kayak Fishing Series, this round could not have gone ahead without the great support of our generous sponsors Daiwa, Berkley, Atomic, Lowrance, Rhino-Rack, Strike Pro, Austackle, TT Lures, JML Anglers Alliance, Power-Pole, Mortgage Corp, Hog’s Breath Cafe and ABT. Thanks also to Mal Gray, Trish Gray and John Hooper from Sunstate Hobie in Brisbane and Birtinya for providing Hobie dealer support throughout the weekend.[/vc_column_text][vc_spacer height=”30″][vc_separator][vc_spacer height=”30″][vc_column_text]DAY ONE IS IN THE BAG AT REDCLIFFE

The opening day of round 12 of the 2015 Hobie® Kayak Bream Series presented by Daiwa, at Redcliffe, on the Sunshine Coast, in Queensland has just been completed. A good field of competitors chased a bag of 4 bream, in the final Hobie Fishing World Championship qualifying tournament in Australia, for 2015.

Excited anglers headed off from the Power-Pole starting line in excellent, conditions, which went against the forecast and remained constant, with no predicted rain throughout the session.

While it wasn’t a fishing frenzy on the water, the overall action was reasonably good with a large percentage of anglers bagging out with their 4 legal fish. The bream were biting hard early in limited locations, but as the tide began to rise, creating depth around the reefs, and a light breeze provided some extra cover, other areas across the arena began to open up with a lot more activity. Upgrades were limited, but some impressive bags for the area were brought in to the scales. 4 impressive bream weighing in at over a kilo kicked a number of bags. The consensus is that tomorrow, it will require a solid above average bag, to take out the major prizes.

At the completion of the Strike Pro weigh-in this afternoon, Steve Crawley from Queensland was the TT Lures leader of the Day, with an impressive bag for Redcliffe of 2.60kg. Crawley sits just 40g ahead of fellow Queenslander Guy Struthers on 2.56kg and James Garner also from Queensland brought in a solid 2.51kg bag to the weigh-in table which was good enough to place him in third position on today’s Lowrance Leaderboard.

The head of the leaderboard, Crawley, is also leading the Hog’s Breath Café Boss Hog Big Bream with the biggest fish of the day, which weighed in at 1.17 kg.

There is so much on the line tomorrow: Excellent prize money; Sponsor packs; Angler of the Year and Series Ranking points; and Qualification into the Australian Championship. But the biggest honour of all, will be the remaining, highly sort after places on the team to represent Australia at the Hobie Fishing World Championship in China this coming November.

Tonight anglers are summing up and considering their day on Deception ad Morton Bays, developing strategies to consolidate or to improve on their day 1 standings. There’ll be some sleepless anglers hitting the water in the morning but we’re in for an excellent session, with two particularly elated competitors buzzing with excitement late tomorrow afternoon.

Stay in-touch with the action and tune in for the live feed of the weigh-in, which will be streamed on the internet from 2pm Australian Eastern Standard Time.[/vc_column_text][/vc_tta_section][vc_tta_section title=”Results ” tab_id=”1396571281-2-48″][vc_column_text]