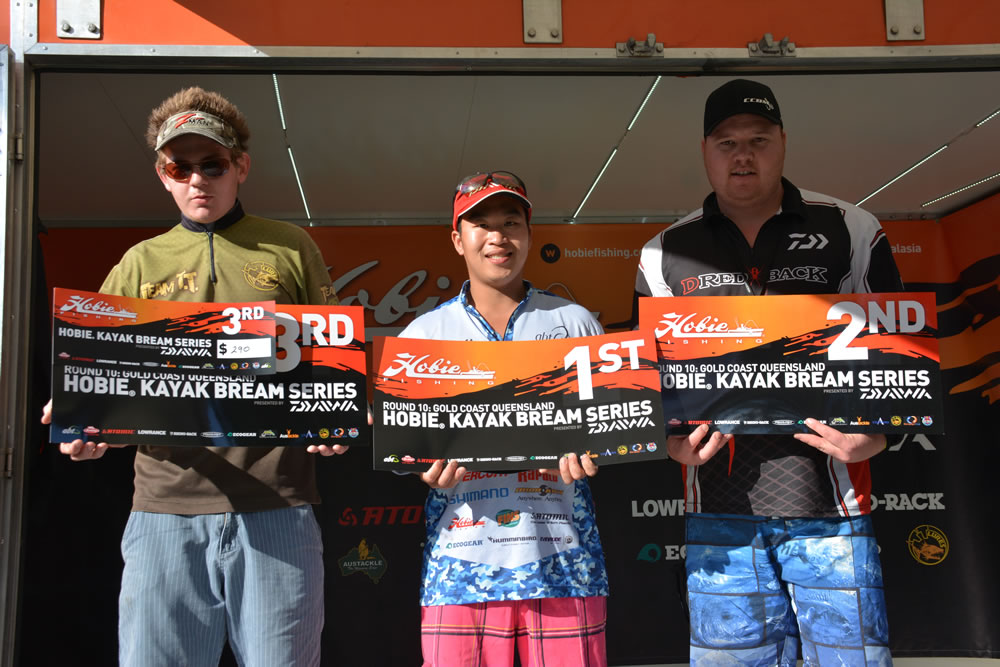 Round 10 of the Hobie Kayak Bream Series presented by Daiwa has been run and won on the Gold Coast in Queensland. Kendall Soo from Brisbane in Queensland took the top prize with his 8 bream bag weighing a total of 4.79kg

The Queensland saying “Beautiful one day, perfect the next” held true for Round 10 of the Hobie Kayak Bream Series in what was an exceptional weekend’s kayak fishing! Almost the entire field of 27 anglers returned to the Daiwa event site with full bags of 4 bream on both days and total of 196 bream were brough to the scales with a combined weight of 91.07kg.[/vc_column_text][vc_spacer height=”20″][vc_single_image image=”9357″ img_size=”full”][vc_spacer height=”20″][vc_column_text]

Competitors took off from the Power-Pole starting line in near perfect conditions with a light breeze and good cloud cover on the first day of competition. Spreading out across the arena, many anglers worked the canals in Sovereign Island, while others went further afield, as far as Sea World, near the Narrang River, and even a few bagged out directly in front of the launch site under Ephraim Island Bridge.

The bream were on the bite early with many anglers getting their bag of 4 bream by 11:00am and then spent the rest of the day working the numbers and upgrading. At the end of day one, 23 anglers returned to the Hobie Event Trailer with full bags of 4 bream. It was Kendal Soo, from Brisbane, who was the TT Lures Leader of the day with 4 bream weighing 2.54kg, a 500g lead over nearest competitor, fellow Queenslander, Michael Maas with 4 for 2.23kg.

Only 500g separated the top 5 going into day two of the competition when a tight field of anglers would battle it out for one of two qualifying spots in the Hobie Kayak Bream Series Australian Championship to be held on Lake Macquarie later this year.

The quality conditions continued into day two and we saw another great day on the Gold Coast with 25 anglers bring full bags to the scales for weigh in.

At the end of the weigh in it was Kendall Soo from Brisbane, Queensland who took the top prize of Round 10 and qualified for the Australian Championship. Kendal caught 8 bream over the two days weighing a total of 4.79kg and received $810.00 plus a Daiwa sponsors prize pack for his efforts.

Kendall fishes the Gold Coast often and had a good idea of his plan of attack going in to the competition.

“I knew coming into the tournament that they’d been pulling good bags out of Sovereign in the last few comps and that there’s always big fish in there too. I fished it all day! “

“Coming in to day two with a 500g lead I was quietly confident but a bit edgy out there when I couldn’t catch them this morning. Today was a bit harder than yesterday but I’m just stoked that I got them and qualified for the Australian Championship. “[/vc_column_text][vc_spacer height=”20″][vc_single_image image=”9358″ img_size=”full”][vc_spacer height=”20″][vc_column_text]Winning Tackle

“Just consistently working the canals. I just went up and down it for the whole two days.”

Fishing the Gold Coast for the first time, Mark had no real plan of attack coming in to the comp but got some advice off a mate that paid off!

“Bryce Beechy, who’s a local here, gave me a bit of advice and told me I’d find the bigger fish out in the running water on the east side of Sovereign Island. I fished the canals of Sovereign Island early and got a small bag and then headed around the back where Bryce said and focused on upgrading and it paid off”.

[/vc_column_text][vc_single_image image=”9413″ img_size=”full”][vc_spacer height=”20″][vc_column_text]Warren Cossell held on to his Hog’s Breath Café, Boss Hog Big Bream from day 1 and walked away with $100.00 for his his efforts. He landed the 820g bag kicker on a Berkley Crabby, in Chocolate Sparkle, fished on a 1/60th hidden weight jighead.

“I was just flicking it up against the pontoons, letting it slowly sink down and the bream were taking it as it got to the bottom.[/vc_column_text][vc_spacer height=”20″][vc_column_text]

Round 11 of the Hobie Kayak Bream Series will be on Sunday the 9th of August on St Georges Basin on the New South Wales, south coast. The event will be run by Southern Bream Series and you can enter online at: http://www.basinlureandfly.org.au/skeeter-powerpole-round-7-entry/

Like all of the events in the Hobie Kayak Fishing Series, this round could not have gone ahead without the great support of our generous sponsors Daiwa, Berkley, Atomic. Lowrance, Rhino-Rack, Strike Pro, Austackle, TT Lures, Yamatoyo, Ecogear, Power-Pole, Mortgage Corp, Hog’s Breath Cafe and ABT. Thanks also to Mal Gray and Hooper from Sunstate Hobie for providing Hobie dealer support.[/vc_column_text][vc_separator][vc_column_text]

Round 10 of the Hobie® Kayak Bream Series presented by Daiwa on the Gold Coast in Queensland saw 27 anglers take off from the Power-Pole Start line in what was to become a great day on the water.

23 of 27 anglers returned with full bags of 4 bream after the first session and ultimately, it was Kendal Soo, from Brisbane, who was the TT Lures Leader of the Day with 4 for 2.54kg. Kendal was followed closely by, fellow Queenslander, Michael Maas with 4 for 2.23kg and Mark Young, from New South Wales, who is currently in 3rd place on today’s Lowrance Leaderboard with 4 bream for 2.20kg.

Competitors took off in near perfect conditions with a light breeze and good cloud cover bringing on the bite. They spread out across the arena, with many anglers working the Canals in Sovereign Island while others went further afield and even a few bagged out as close as Ephraim Island Bridge directly in front of the launch site.

The bream were on the bite, early with many anglers bagging out by 11:00am to spend the rest of the day working the numbers on upgrades. After day one, the chase for the Hog’s Breath Café Boss Hog Big Bream, the biggest fish of the tournament, was headed by Warren Cossell, from Queensland, with an 820 gram specimen.