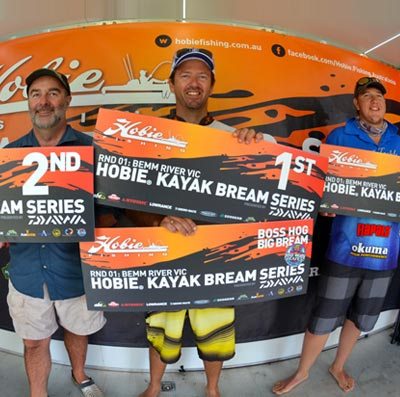 86 Anglers from up and down the east coast of Australia descended on the sleepy, Bream fishery of Bemm River in East Gippsland, Victoria for Round One of the 2015 Hobie Kayak Bream Series presented by Daiwa.

On the weekend of February 7 and 8, the small coastal township of Bemm River in the East Gippsland region of Victoria was the venue for round one of the Hobie® Kayak Bream Series.

Bemm River village is situated on the north-western shore of the Sydenham Inlet, 441km east of the state capital of Melbourne. The natural coastal inlet, fed by the Bemm and Little Rivers, stretches over sand hills to the shoreline of the Tasman Sea. The sleepy village, with a total population of 60 local residents saw 86 kayak anglers arrive on Friday night to put the system to the test over the course of the weekend. Bemm River has proved itself to be a healthy Black Bream fishery and Hobie® Kayak Bream Series tournaments have featured “Bemm” on the tournament calendar, year after year.

The opening tournament for the 2015 season at Bemm was a qualifier for the Hobie® Kayak Bream Series Australian Championship and 53 Victorian, 30 New South Wales, and 3 ACT anglers took part. An excellent haul of fish were taken over the two days with 200 legal size bream brought to the scales on day one with a total accumulated weight of 138.8kg. On Sunday when some were predicting that catch to fall away 207 legal size fish returned to the Daiwa Event Site weighing in at 139.16kg. Bemm River had kept its superb reputation in tack.

On the opening morning of the two-day tournament competing anglers pedalled off from the Power-Pole starting line in excellent conditions that held up throughout the day. Anglers were chasing bream with a bag limit of three fish, which were to be brought back to the Berkley Bump Tub for a live weigh-in. As the session came to a close anglers threw their final casts around the Atomic Launch Site before returning their keytags, to indicate that anglers were safely back on shore at the Daiwa Event Site.

Fishing throughout the day was excellent with 59 competitors getting their full bag of three legal Bream. The fish were on the chew early and hit hard in the stable conditions and continued later in the day when a light of breeze provided cover with ripples peeling across the water under the clear blue sky. Upgrades were common and widespread in many locations across the Austackle Arena.

At the completion of the day one weigh-in, Chris Burbidge from Victoria was the TT Lures Leader of the Day with a 3kg bag, closely followed by the 2.94kg bag of Daniel Brady from Victoria and Josh Smith also from Victoria had a 2.67kg bag which placed him in third with one day to go in the event. Darren Evans was leading the Hog’s Breath Café Boss Hog Big Bream with the biggest fish of the day.

In conditions that were similar to day one with clear blue skies and temperatures hovering around 35°C, anglers pedalled off from the Power-Pole starting line, in a patchy, light breeze hoping to improve on Saturday’s catch.

After two long days on the Austackle Arena anglers worked their way back to the Daiwa Event Site as the wind blew up and peaked at around 25kph. All anglers returned safely back at the Daiwa Event Site and an impressive number of bags were placed on the scales for the day two Strike Pro Weigh-in. Simon Morley from Bulli in New South Wales snared the major prize for the event his first finish at the top of the Lowrance Leaderboard. Second place went to the current Australian Champion and day one leader Chris Burbidge from Ferntree Gully in Victoria while Josh Smith from Tyers in Victoria, in his second tournament season, took the final place with his first ever podium finish.

After his day one standing in twelfth position, Simon Morley, an Australian representative in the 2014 Hobie Fishing World Championship in the Netherlands, had a simple plan of attack, which was to hit the spot that had previously worked for him. After his initial plans for a repeat of last year at Bemm had to be “thrown away” because of water levels, Morley had to re-think his efforts for the weekend.

“I got fish early yesterday morning and when the area I was fishing shut down I pedalled directly across to near the entrance where the tidal water was coming in and I found a bank there with no weed on it. I put the O.S.P Dunk on, that a mate from fishin.com.au Adam Costa gave me, and first cast I got a fish and so I was pretty happy with that. Then I upgraded my fish three times just before I had to come in for the 2pm finish yesterday.

Today I went straight back there, because I knew there were fish and first cast I got a 40cm to the tip and I had my three fish by about a quarter past seven and upgraded once before 8 o’clock. I went back onto the same flat again and waited for the wind to come up, before that it was really still, I put another cast in and I got an upgrade so I was pretty happy with the day overall”.

Morley summed up what gave him the winning edge in the tournament.

“I found the fish yesterday arvo and went straight back there. I had to race back there because of the reverse start today and when I got there, there were two guys already fishing the spot. I just snuck in between them and put a cast in and wham-o, it turned out pretty good”.

Morley has a specific aim he is trying to achieve this season.

“I really want to qualify for the Hobie Worlds again, so I’ll be back down at Mallacoota giving it another crack and I’ll try to get to the other two qualifying rounds in Forster and Redcliffe to make the worlds”.

Burbidge netted a full bag of Bream on both competition days with an accumulated weight of 5.52kg just short of the tournament winner by .14kg, and giving him the slightest advantage in weight of .03kg over third place finisher Josh Smith from Tyers.

Burbidge summed up his two days on the water at Bemm River.

“I started yesterday off a point, I was using a Jackall Colt Minnow, I got my bag and then went out to deep water once the bite shut down. There I got some upgrades on a vibe. Today I tried the same thing but it didn’t work, so I came back over to the edge of a flat using a Jackall Squirrel and I got two good fish, eventually, using a vibe in the deeper water I got another 700g fish so that sort of sized my bag out with the three, seven hundreds. So yeah, it was a good day”.

“Bemm is a great spot, there are so many options. One option was sort of shut down on us, the river, just because we had big water come down about two weeks back. But there are just so many options, you’ve got drop offs, you’ve got flats, you’ve got an odd snag here and there. Although the water is very low at this time of year, it’s a great fishery, a fantastic fishery”.

[/vc_column_text][vc_single_image image=”6872″ img_link_target=”_self” img_size=”full”][vc_column_text]Tournament winner Simon Morley also took home the Hog’s Breath Café Boss Hog Big Bream cheque by bagging the tournament’s biggest fish, which weighed in at 1.24kg. The fish was caught on the final day of the tournament using an O.S.P. Dunk (pictured) on the flats around the lake end of the channel entrance that had recently opened to the sea.

The latest company to join Hobie Fishing’s superb team of sponsors is Mortgage Corp, headed by Neil Carstairs one of the regular anglers competing in the Hobie Kayak Bream Series. Mortgage Corp have recognized the importance of participating in Hobie kayak events and wish to encourage anglers at all levels to continue to compete in what they believe to be a healthy and exciting sport which encourages top level achievement. But just like Hobie, Mortgage Corp wishes to promote friendship and the sharing of experiences between like-minded people. In view of that Mortgage Corp have instigated a new aspect to the series this season, a random prize draw from the list of competitors on the roster at each event, a prize to reward anyone from the top to the lowest placed angler. The first draw was held and two winners Madeline Hill and Gavin Hurley were presented with their Mortgage Corp Prize Packs.

It’s time to start planning for round two of the series, which will be held at Marlo in Victoria over the February 21-22 weekend with more spots in the Australian Championship up for grabs and a great fishery it is going to be an excellent weekend of competitive fishing.

Thanks to our newest dealers to help out with the Hobie Kayak Bream Series, Tony and Stewie Freeth, from Merimbula, for providing dealer support, and for preparing and supplying a wonderful a BBQ, drinks, fruit and snack packs on both days of the tournament for 86 appreciative anglers. Like all of the events in the Hobie Kayak Fishing Series this round could not have gone ahead without the great support of our generous sponsors Daiwa, Berkley, Atomic. Lowrance, Rhino-Rack, Strike Pro, Austackle, TT Lures, Yamatoyo, Ecogear, Power-Pole, Hog’s Breath Cafe , Mortgage Corp and ABT.[/vc_column_text][/vc_tta_section][vc_tta_section title=”Results” tab_id=”1396571281-2-48″][vc_column_text]

DAY ONE IN THE BAG AT BEMM RIVER, VICTORIA

On the opening morning of the tournament season, a record field of 86 anglers pedaled off from the Power-Pole starting line in brilliant conditions. While the heat soared up into the mid 30’s by the middle of the morning a light breeze also picked up, but it was not quite enough to reduce the draining temperature. Anglers were chasing bream with a bag limit of three fish in the opening round of the 2015 series at the iconic bream fishery of Bemm River which is situated in the East Gippsland region of Victoria.

Fishing throughout the day was excellent with 59 anglers, a magnificent percentage of the field, bagging out with three legal Bream. The fish were on the bite and hitting hard early in the session with many competitors looking for upgrades by 8:30am. The bream were interested in feeding up until midday in most locations across the Austackle Arena but as the tournament moved into the afternoon the fish became comparatively timid but could still be enticed to take lures in a reasonable number of locations under the clear skies with the light breeze rippling the surface. Full bag upgrades were plentiful and widespread in many locations with impressive sized fish being bagged by a large number of competitors.

At the completion of the Strike pro weigh-in three Victorians top the huge field of competitors. Current 2014 Australian Champion Chris Burbidge has continued his run of magnificent tournament performances snaring the TT Lures leader at the close of day one with a 3kg bag. Burbidge holds a slight lead over the 2.94kg bag of Daniel Brady and Joshua Smith with a 2.67kg bag places him in third position on today’s Lowrance Leaderboard.

Darren Evans is leading the Hog’s Breath Café Boss Hog Big Bream with the biggest fish of the day.

With the final day of the event to be completed tomorrow we are in for an excellent session on the water, even though the area was fished hard today, conditions should make for another great day of tournament fishing starting at the earlier time of 6:30am.[/vc_column_text][/vc_tta_section][vc_tta_section title=”Entry List” tab_id=”1420581542372-4-6″][vc_column_text]