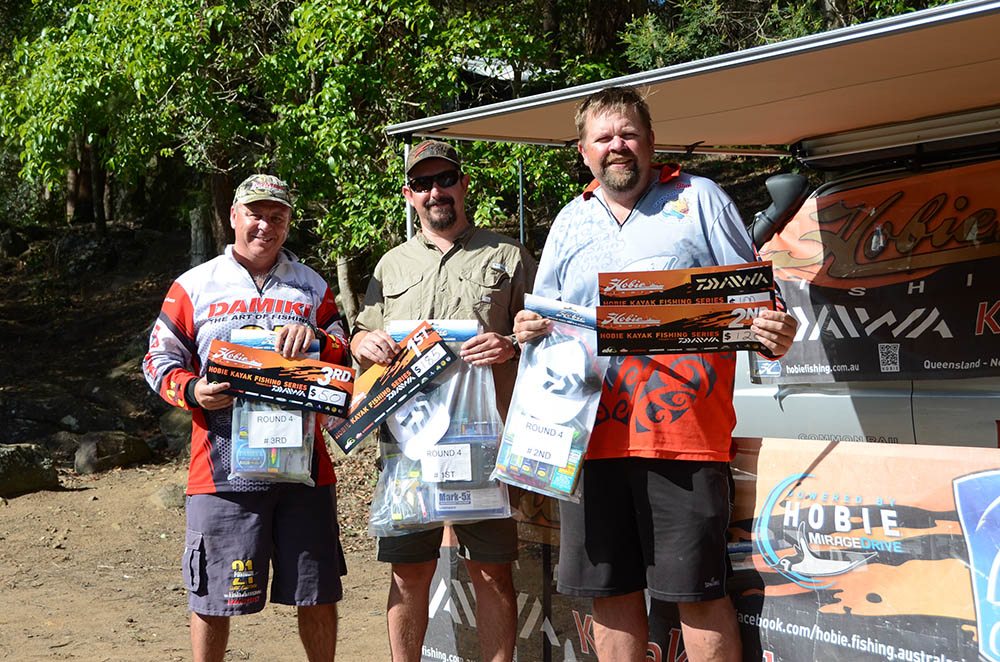 Glenn Hayter, made in the shade!

Hidden in the rolling hills of northern New South Wales, about two and a half hours inland from Byron Bay is the little gem of a waterway called Toonumbar Dam. Built in 1972 in the headwaters of the Richmond River catchment area, the dam has maximum depth of 34m and a surface area stretching to 320ha.

The well-stocked reservoir is known as one of the best freshwater sports fishing locations for Australian Bass on the NSW North Coast. The long, snaking waterway has been regularly stocked for over 20 years. Strong, well-conditioned Australian Bass swim along the edges amongst the thick weed beds that cascade into deep water drop offs. It was the ideal venue on Sunday, September 14 for round 4 of the Hobie® Kayak Bass Series presented by Daiwa.

17 anglers made the journey from up and down the coast to compete in the one day event that resulted in a total aggregate length of 1077cm for 31 bass and three anglers securing a place in the Hobie Kayak Bass Series grand final to be held in October.

Glenn Hayter from New South Wales took the top prize in a very close competition with a total aggregate length of 118cm for three bass, just 1cm ahead of second place getter Peter Bostock from Queensland with 117cm who also took out the Hog’s Breath Cafe, Boss Hog Big Bass Award for his 42cm Bass. Alan Britcliffe from Queensland picked up third place with a total length of 115cm keeping it tight with only a 3cm spead on the podium.

[/vc_column_text][vc_single_image image=”3282″ img_link_target=”_self” img_size=”full”][vc_column_text]Hayter spent the bulk of his day mainly fishing the edges which proved to be a good plan of attack as he had his bag by 7:30am. With the pressure off Glenn spent the remainder of the day upgrading, catching fish right up until the finish, catching one of his 39cm bass at 12:30 just before making his way back to the Atomic launch location.

Fishing the lilly pads, Hayter would drop his smelt coloured, Gulp 3” Minnow to the bottom of about 15 foot of water and give it a couple of hops where the bass would smash it. “If they didn’t hit on the hop, they would follow it up the water column and hit it in the topwater.” This is where, just under the boat, his 40cm bass inhaled the lure, ultimately earning him the number one spot.

Hayter took home a $185 cash prize plus a Lowrance Elite-5X Fishfinder, Daiwa and Atomic Prize Pack for his efforts.

Fishing the lilly pads and in particular, the shady banks that provided good cover throughout the day. “While I got some good bites in the sun, the bulk of the action came out of the shade”

[/vc_column_text][vc_single_image image=”3280″ img_link_target=”_self” img_size=”full”][vc_column_text]Second place getter Peter Bostock put in a one and a half hour paddle from the Power-pole start line to the northern most point of the dam and up into the creek to fish the skinny water away from some of the more heavily pre-fished areas closer to the launch site.

Once Bostock’s home dam, Peter used his inside knowledge and opted to use his Quest 13 rather than his Pro Angler and take advantage of it’s speed, size and manoeuvrability to get him as far as possible as quickly as possible up the creek and into the skinny water.

Swimming with his Quest in some places in order to get under low branches Peter was able to gain access the remotest areas of the creek that held his 42cm bass.

When asked about his technique Peter responded, “I went looking for under cuts in the bank and would have to accurately cast to drop my Savage Gear 3D Crayfish (pictured below) into the current running under there. If you cast it right, the bass would just smash it within a second of it hitting the water.[/vc_column_text][vc_single_image image=”3275″ img_link_target=”_self” img_size=”full”][vc_column_text]Peter qualifies for a spot in the the Hobie Kayak Bass Series Grand Final to be held in October as well as taking home a $120 cash prize, a Unitika, Berkley, Austackle, TT Lures Prize Pack for his efforts. He also walked away with the $100, Hog’s Breath Cafe, Boss Hog Big Bass Award for one of his two 42cm bass.

Thanks to Noel and the team from Bunyips in Lismore for providing dealer support as well as the BBQ and drinks at the tournament. Like all of the events in the Hobie Kayak Fishing Series, this round could not have gone ahead without the great support of our generous sponsors the great support of our generous sponsors Daiwa, Berkley, Atomic. Lowrance, Rhino-Rack, Strike Pro, Austackle, TT Lures, Yamatoyo, Ecogear, Power-Pole and Hog’s Breath Cafe.[/vc_column_text][/vc_tta_section][vc_tta_section title=”Image Gallery” tab_id=”1397708619255-2-0″][vc_gallery type=”image_grid” interval=”3″ images=”3251,3252,3253,3254″ onclick=”link_image” custom_links_target=”_self” img_size=”100×100″ el_class=”tabGallery” title=”Image Gallery”][/vc_tta_section][vc_tta_section title=”Event Info” tab_id=”1397712469187-3-3″][vc_row_inner][vc_column_inner width=”1/4″][vc_column_text]