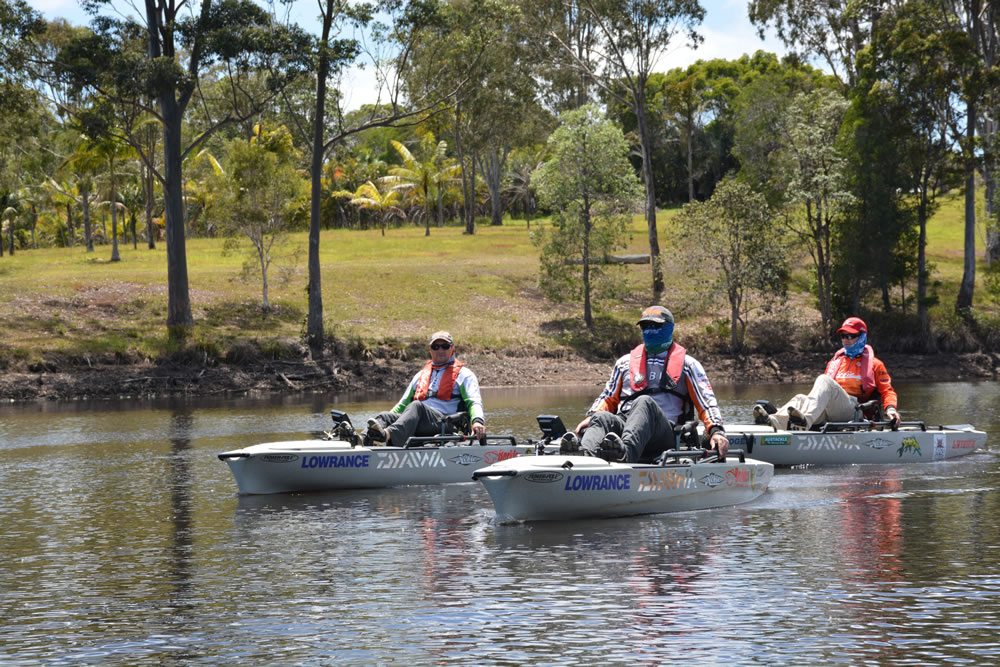 Lake Macdonald, Queensland. Friday October 24, 2014. The day got off to an excellent start this morning as anglers took to the waters of Lake Macdonald for the Lowrance Navigation Day of the 2014 Hobie® Kayak Bass Series Grand Final presented by Daiwa.

Located 15 minutes inland from the iconic coastal Queensland tourist town of Noosa, Lake Macdonald is held back by 6 Mile Creek Dam and its back water has a surface area of 260ha with an average depth of 6m.

The area around the lake is brimming with a vast selection of native plant, animal and bird life and the lake itself is well stocked with species including Saratoga, Golden Perch and the target species for the grand final, Australian Bass.

The event site was a buzz this morning as anglers from up and down the East Coast prepared for their first session on the tournament arena. The Lowrance Navigation Day provided the opportunity for competitors to reconnoiter the venue before the commencement of the three session competition.

The Hobie Cat Australasia supplied 2015 Hobie Pro Angler 14 kayaks, made their Australian debut and were eagerly received by the grand finalists. The new skeg and MirageDrive with Glide Technology were a big hit giving superior tracking and a substantial increase in speed for less effort.

The rules for the session did not allow for any fishing equipment to be taken aboard the kayaks today. The anglers were allowed to make visual observations and gather information about structure, locations, distances, water conditions and to use the Lowrance Elite 5 CHIRP sounders, which provide better definition between bait schools and target fish, to survey the topography of the lakebed, locate and identify structure and most importantly, locate areas where fish were congregating.

2013 Winner of the Hobie Kayak Bass Series Grand Final, Jonathan Chen, said  “I’m excited to be back this year, it’s a nice small waterway and I can’t wait to get out there and see how and where everyone goes. I’ve got all my rods rigged and I’m just going to throw the whole tackle box at it”.

The weather forecast is for high 20’s for the next couple of days with wind between 10 and 15 km/h and barometric pressure at 1020.9 and rising, it’s looking like it’s going to be a great grand final.