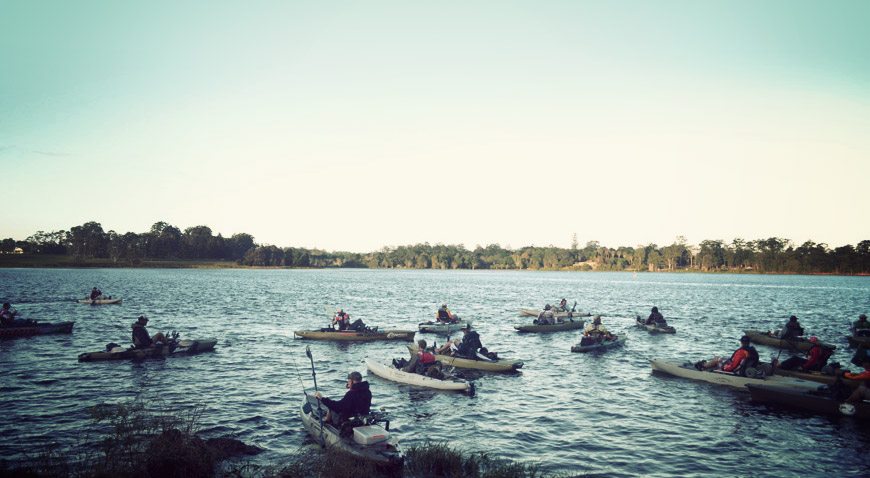 After much speculation, Hobie Cat Australasia is pleased to announce that the Grand Final of the 2014 Hobie Kayak Bass Series presented by Daiwa is set to take place on Lake Macdonald, Queensland on the weekend of October 25 and 26.

The announcement was delayed due to South East Queensland Water closing the dam for recreational fishing for a short while but after extensive water quality testing, the dam was given the green light and re-opened on Friday and can now be confirmed as this year’s grand final arena.

Situated just 15 minutes inland from the iconic Queensland tourist destination of Noosa, Lake Macdonald is held back by 6 Mile Creek Dam and its back water has a surface area of 260ha with an average depth of 6m.

The surrounding area is famous for its walking trails, showcasing its vast selection of flora and fauna and the areas impressive bio-diversity.  The lake is well stocked by volunteers who run a hatchery on the waterway adding numerous species of fish into the system but most importantly keeping stocks high of Australian Bass, the target species for the grand final.

A favourite among Australian Bass anglers with its ample structure and high quality fishing, Lake MacDonald has something for everyone. It will keep our grand finalists busy casting around weed beds, manmade aerators, drop offs and fallen trees and is the perfect spot to hold this year’s Hobie Kayak Bass Series Grand Final.

Steve Fields, Tournament Director and Managing Director at Hobie Cat Australasia had this to say about the competition and location. “The Hobie Kayak Bass Series is a truly unique series. Catch, Photo, Release (CPR) tournament fishing at its very best, it’s a series that allows kayak anglers to challenge their abilities in an incredibly competitive series and to do so on a national stage. With the Grand Final now confirmed for Queensland’s Lake Macdonald, the opportunity to showcase some of the countries best kayak bass fishing is the very exciting culmination of a lot of hard work”.